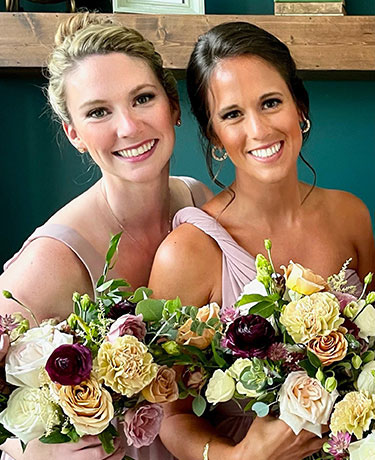 The family tree of one group of occupational therapists (OT) is forever intertwined with the Radford University Master of Occupational Therapy (M.O.T.) program. It’s a complicated story, so try to keep up.

Lindsay Pugh Tallman was among the graduates of the second class to complete the M.O.T. program in 2012. She was a third-generation Highlander who had also earned her bachelor’s degree in communications sciences and disorders from Radford.

While Lindsay was in the M.O.T. program, Virginia Tech human development student Allie Woodrum asked to interview her about occupational therapy for one of her undergraduate courses.

After the interview, Allie messaged Lindsay to thank her for her time, and Lindsay mentioned that Allie’s brother, Nicholas, was cute.

“To make a long story short, she then became my and Nicholas’ matchmaker,” said Lindsay, who would go on to marry Nicholas, with whom she now has two kids and another on the way. Nicholas is now a pediatrician who completed a three-year residency program at the Virginia Tech Carilion School of Medicine in Roanoke.

“For her time and the interview, I set up her and my brother, Nick,” Allie added. “It was a good little swap if I do say so myself.”

As Lindsay got to know Allie better, she knew she would be a perfect candidate for the M.O.T. program.

“Lindsay talked highly of the professors she had and the small class sizes at Radford,” Allie said. “I was familiar with the area since I was at Virginia Tech at the time, and after visiting campus and meeting some of the professors, I was sold.” 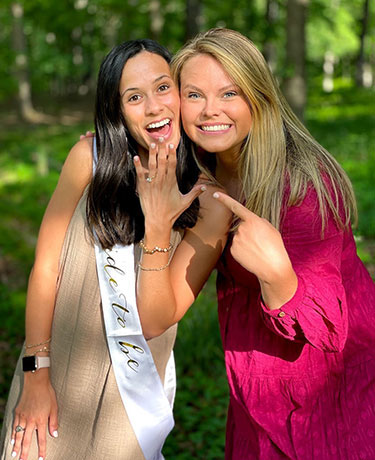 Allie soon enrolled in the M.O.T. program. At the same time, her younger sister, Becca, followed in her footsteps and was studying human development at Virginia Tech. During Becca’s freshman year, Allie was living in Blacksburg and commuting to Radford for her M.O.T. studies. This allowed Allie to tell Becca all about her M.O.T. journey.

“Over time, Lindsay and I persuaded Becca to join in on the fun and apply to the M.O.T. program at Radford,” Allie said. “We have doctors and teachers in the family, and I wanted another family member to love occupational therapy as much as I do.”

Allie completed the program and graduated in 2017. Becca is currently in her second year of the M.O.T. program at Radford University Carilion (RUC) and expects to graduate in December 2022.

In the time she has been in the program, Becca got engaged to Britton Lee, who is the younger brother of Hanna Lee. According to Lindsay, Hanna was her brother’s girlfriend’s freshman-year roommate at Virginia Tech. During the time Lindsay’s brother was at Tech, Lindsay got to know Hanna and encouraged her to apply to the M.O.T. program. Hanna applied and completed the program in 2018.

Whew! To say the Radford University M.O.T. program is an integral part of this family’s history is an understatement. Not only was it an important part of their personal stories, but the program has led those who have graduated to engaging, fulfilling careers beyond the classroom and lab.

Lindsay was a contract occupational therapist for two school systems and worked with a pediatric population ranging in age from newborn to 22 years, also working for an outpatient rehab group from 2013 to 2018 in the Roanoke and New River Valleys. Allie works in the Charlotte-Mecklenburg School system. Hanna worked at a children’s hospital in Washington, D.C., after graduation; volunteered and developed an occupational therapy program at a hospital in Kenya; and recently moved to Houston to work at the No. 1 pediatric cardiology unit in the country at Texas Children’s Hospital.

After graduating, Becca plans to find a job in occupational therapy in the Northern Virginia area.

“All of my family and friends who are OTs explained occupational therapy is focused on the client and their needs, helping them find meaningful engagement in the daily lives,” Becca said. “That spoke to me and made me really want to pursue a career in OT. I’m so glad I have these wonderful, caring professionals around me that helped me find my path.”

Before moving and embarking on her career, though, Becca has a wedding in her future. She and Britton will be getting married in May, once she has completed her M.O.T. studies. The group will get to reminisce at the event because Lindsay, Allie and Hanna will all be on hand as bridesmaids at Becca’s wedding.

“It’s fun to look back on my grad school journey when Becca talks about her current program,” Allie said. “It was a great 2 ½ years with awesome professors and peers in my class. Hanna overlapped with me during parts of my college years, and I thought about how it’s such a small world once our siblings started dating. And now, they’re getting married!"