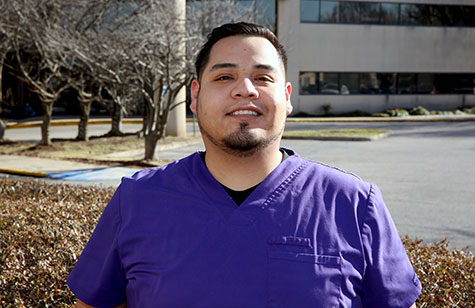 Radford University Carilion medical laboratory science (M.L.S.) student Richard Martinez has experienced a lot of change in a very short amount of time over the last couple of years.

Martinez was laid off from his first job as a laboratory technician during the first wave of the pandemic and had been on the job with his next employer for less than a year when he decided to pick up roots and relocate about 3,000 miles away.

Martinez was living in his native Los Angeles, California, at the time, working at a lab. He had two coworkers who had graduated or were soon to graduate from the M.L.S. program in Roanoke. They both spoke so highly of the program and the professors that he took notice.

“What stood out the most was how they mentioned the professors were very caring and would always be there if you were struggling,” Martinez recalled. “I knew the material we needed to learn would not be easy, so that was something that really spoke to me. I believe having a caring circle around you is very important for success.”

When one of those coworkers graduated from RUC and returned to California, obtained her license and got to work in a lucrative job, Martinez decided to apply for a seat in the program. Unfortunately, the program was at full capacity for the fall 2021 semester, and he was placed on a waitlist.

“I tried not to let the situation get me down and followed up with [M.L.S. Program Director] Laura Link and [RUC Director of Admissions] Sarah Wambe to reaffirm my interest in joining the program when there was a spot available,” Martinez said.

Months passed and Martinez assumed that he wouldn’t be admitted in 2021. All of that changed, however, on Aug. 13, when Martinez received an e-mail that change his life and his educational path dramatically.

“The e-mail said there may be a seat available in the program for the fall 2021 semester,” Martinez said, “but classes started on Aug. 23, so I had to make a quick decision. There was so much to consider.”

Martinez set up a Zoom call with Link to talk about the specifics and spoke with his family and girlfriend to explain the situation and ask for their opinions. Joining the program meant Martinez would have to leave everything on the West Coast and figure out how to start a new life across the country within six days.

“I had less than a week to confirm acceptance to the program, resign from my job, plan financially, schedule a physical, get my medical records up to date, find a flight to Roanoke, figure out how to commute, say goodbye to my family and, most importantly, find a place to live since campus housing was already full,” Martinez remembers. “At that point, it was stressful, but I viewed this opportunity as a blessing that I couldn’t pass up.”

Martinez made the leap and calls the days leading up to his first day of classes at RUC some of the most interesting of his life. “Overall, as hectic as that week might have been,” Martinez said, “I wouldn’t change my experience because it helped grow even more.”

Martinez says his year as a student in the M.L.S. program has been very rewarding and made the work he had to put in to join the program at RUC worth the effort.

“To someone considering the program, I would say take the leap like I did,” Martinez said. “Even though it might be a bit intimidating or frightening, our professors are with us every step of the way. They’re here to help us pass the board exam and better our lives through a great career.”

Martinez, now a senior in the M.L.S. program who expects to graduate this spring, said he appreciates how his instructors work with students to understand complex subjects and care about each student’s success in the classroom and beyond. He says the M.L.S. students and faculty, as well as RUC as a whole, has a “family vibe,” where all members are valued and supported.

When Martinez graduates, he plans to return to LA and begin his career as a clinical or medical laboratory scientist.

“Being a good laboratory scientist requires someone who cares about what they do, because sometimes the small details we uncover or don’t might lead the doctor to a different diagnosis,” Martinez said. “I want to be that caring person and know that I’m making a difference for someone, even if it’s behind the scenes.”