Professor emeritus reflects on her winding path as an educator 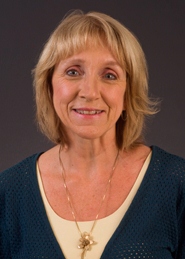 The big realization that ultimately shaped much of Carolyn Mathews’ life – her awareness that education was her calling – arrived at an unusual moment.

As a child, Mathews’ earliest dreams were of becoming a chicken farmer. Those fell away by about the fourth grade, however, and were replaced by far longer-lasting ambitions to be a writer.

An English major in college, she initially considered becoming a reporter, but she knew she wasn’t a huge fan of deadlines, so she got her qualifications to teach instead.

“I remember thinking I would have my summers free to write,” she has said. “My reasons for choosing teacher licensure weren’t the best … my reasons were selfish.”

And so it was that in the fall of 1975, she started work at Dublin Middle School in Pulaski County where, before an audience of eighth-graders, an entirely new perspective dawned on her almost immediately.

“I actually had no real inkling of what a teaching life would be until I stepped in front of my own classroom. Something magical happened,” she later said.

“And I thought: Why did I not know that I wanted to be a teacher? This is the best thing in the world,” Mathews recently recalled. “It felt like my brain was just on fire with trying to get students to understand.”

Teaching became the field she would occupy for nearly half a century, one that took her from Dublin to UNC-Greensboro, where she earned her Ph.D., and Greensboro College, then to Wake Forest University and finally, in 1999, back to the New River Valley and to Radford University, where she remained for 21 years, working largely in teacher preparation programs.

Once ambivalent, Mathews became an educator of educators, focused primarily on helping her students learn to instruct others in English, on every level from kindergarten through the 12th grade.

“I had to think of them, all the time, as future teachers,” she said.

A key component of her educational philosophy, she said, has been to find ways to involve students in the actual mental processes necessary for understanding and to avoid basic lecturing.

“To lead, direct, question and assist,” as she put it.

“I couldn’t just have a lesson where I just preached, you know. Because I didn’t want them thinking they were just going out into high schools and lecturing. I tried to design lessons that would serve as models for them when they went out,” she explained.

“When I was a student at Radford in 1973, Bob Lockwood was the beginning professor, and he talked about the importance of active learning,” Mathews said. She took that concept to heart for the next four decades: “Students have to be active learners. They’ll get it if their minds will engage with it.”

Mathews retired in April 2020 and, last October, was designated a professor emeritus in the Department of English.

“I firmly believe that my teaching self remains my very best self,” Mathews wrote in an essay about her career.

“Teaching has been the one consistent thing that lets me forget myself,” she said. “I forget myself by losing track of time and planning and over-planning a lesson, and loving doing that work.”

Mathews’ retirement coincided with the second month of the COVID-19 pandemic, which canceled her hopes to do volunteer work and mentoring with Pulaski County schools.

She’s been working within other areas, however, finding other outlets. She increased her activity with the New River Historical Society and the Wilderness Road Regional Museum, both in Newbern, where she lives, and last year wrote four grants that received funding.

She continues to exercise her creative efforts as well, participating in a long-running Monday writing group and another that focuses on poetry. A practicing painter, she creates watercolors that she then cuts into collages.

Recently she began cultivating seedlings, which has led to a vegetable garden: “I’ve got little grow lights in my basement, where tomatoes will start coming up in about February.”

When asked about her long career, one area she said stood out to her didn’t actually relate directly to her role as a teacher.

“Because I was coordinator of English education, I had to do a lot of program assessment,” Mathews said. “I had to figure out how to keep data that would prove that we had done what we say we are doing and preparing teachers. I had to figure out all these assessment tasks, designed assessment instruments and I never had any training in any of that at all. That stretched me.

“And probably one of my highlights of that whole segment of my teaching was that the National Council of Teachers of English chose my program report to include on their website as an exemplar report from a college program,” she recalled. “I thought, ‘Hey, I cracked it, I know how to do that!’ And that was good.”