For EMS volunteers, gaining experience is the reward 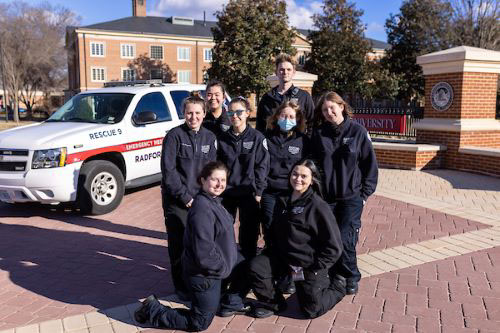 Members of Radford University Emergency Medical Services current team. RUEMS can sometimes work 12- to 24-hour shifts, yet receive no pay or course credit for their time.

For more than three decades, when Highlanders call 911 for on-campus medical assistance, the odds have been very good that the first people on the scene will be from among their own ranks — eager, knowledgeable Radford University students who are there to help.

That's because since 1988, the campus and other school-owned properties have been served in part by Radford University Emergency Medical Services.

Headquartered in the Allen Building near the intersection of Lee Highway and University Drive, RUEMS officers say they typically are capable of reaching most parts of campus in an average of about two minutes. While they don't transport patients to hospitals, they can generally get to the scene before a city ambulance does.

"They go out, they initiate contact, they get basic vitals. They assess the patients and give us an update, a heads-up of what's going on," said Radford Fire & EMS Chief Rodney Haywood.

Although the city paramedics have higher certification levels and assume command once they arrive, he said, "both entities mesh together to take care of the patient."

RUEMS crews tend to work 12- to 24-hour shifts, sometimes sleeping in bunks in their staff room in Allen and responding to calls in Rescue 9, the team’s Chevrolet Tahoe. The vehicle is about eight years old, but its Star of Life – the official symbol of emergency medical care – was recently restriped in an updated Highlander tartan. 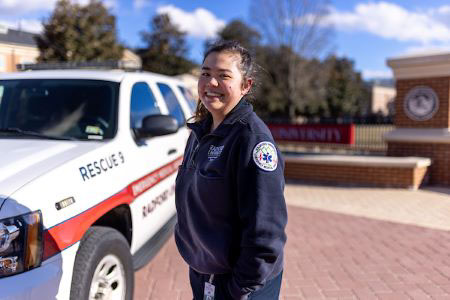 Serving with RUEMS is a fast way to get experience in the field.

"You can't teach it in a classroom; it's a different environment," Haywood explained. "The job they do, out in the campus community and the city community, it goes a long way. A lot of the time, they do things they don't get recognition for, but they're not doing it for the recognition. They're just doing it to help."

In fact, RUEMS, which has a staff of about 10 members with approximately another 10 newcomers currently on probationary status, is an entirely volunteer effort. They receive no pay for the hours they put in, and their work is not done for any course credit.

"There are a lot of challenges that come with this," said RUEMS Chief Emily Cha, a junior from Falls Church, Virginia. "We're all students, and we have to prioritize school over all of this. But I think the friendships and the bonding you can make really make it worth it. And also being out and making a difference."

Cha is a nursing student who joined the team as a freshman, in 2019, after taking an EMT class in high school. Once she graduates from Radford, she hopes to work in emergency rooms and intensive care units, with the goal of moving up to becoming a flight nurse.

"That's essentially doing EMS, but you're responding in a helicopter to really high-acuity patients," Cha said.

Undertaking high-stress situations has been a valuable experience, she said, especially in instances in which a quick response was crucial.

"People might think, 'well, it's a bunch of students, how much of a difference can they really make?'" Cha said.

"If you're in a situation and you're on campus, and you really, really need help ... you're really going to want someone to be able to get there in two minutes or less," she continued. "So, we have such an advantage of being so close to campus that we can be the first medical responders, and that can really make a difference between life and death." 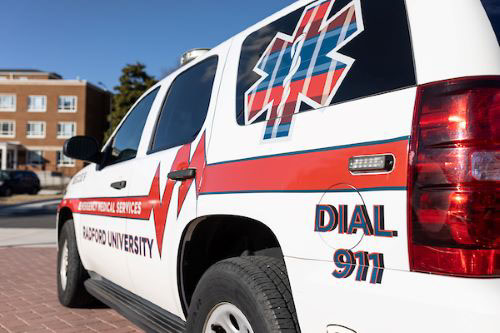 Rescue 9, the RUEMS team’s 2013 Chevrolet Tahoe bear the emblem of the Star of Life – the official symbol of emergency medical care – which was recently restriped in an updated Highlander tartan.

Connor Knights '21, a recent captain of operations, also encountered a time-sensitive emergency, along with two other RUEMS members, Megan Weir and Trinity Hayes.

They were on duty last fall, on the first night RUEMS was back in service after summer break, and they answered a residential call for a panic attack. While they were on the scene, the person they were treating collapsed and showed a weak pulse. It had been years since the team had been called upon to perform CPR, but that’s what they found themselves doing.

"It was definitely something you wish you could prepare a little bit more for, just because it's such a serious call," Knights remembered. He said they immediately began airway management and chest compressions.

"I think it was about three or four minutes until the ambulance got there. And when you're talking about CPR, that's a lot of time,” he said.

Radford Fire & EMS took over when they arrived, but the three students later received commendations from the city for their work.

"I think in the heat of it, everyone on the crew — RUEMS and Radford City — worked well as a team," Knights said.

Initially, Knights majored in criminal justice and minored in forensics, with an eye toward a career in law enforcement. But for now, he said, he plans to continue pursuing emergency work.

"I got some better opportunities with EMS," said Knights, noting that he will soon join Christiansburg's rescue squad.

Chief Haywood concurred: "If you want to get into that field, now's the time because everyone's hurting for help right now."

That recent CPR call exemplifies the kind of work RUEMS can be called upon to perform, Knights offered.

"One thing that we've always tried to get across was that we are a student population that services other students on campus and the surrounding community. A lot of that gets overlooked in the fact that we don’t necessarily have a lot of supplies. We have just one vehicle. And I think this situation was a great representation of what we could do right if we had a little bit more resources, a little bit more funding," he said.