Highlanders in the News: Week of Dec. 19 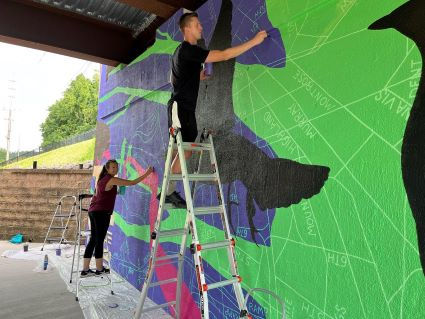 A trio of large, colorful murals that recently appeared along the greenway in Southeast Roanoke sprang from the mind and inspiration of Jon Murrill, M.F.A. ’12.

Over summer and fall, using a crew of 50 “I Heart SE” volunteers, Murrill designed, directed and coordinated the works, which are on display beneath bridges along 9th and 13th streets. The murals were funded by Roanoke city and the National Endowment for the Arts and were officially dedicated on Oct. 22.

“It’s been one of my largest and most rewarding projects to date,” he told the Roanoke Arts Commission. “I really enjoyed working with others … and I plan to do more projects that engage others in the process.”

His artwork, which also includes portraiture, has raised his local profile considerably. This year, he was named as one of The Roanoker magazine’s 40 under 40 listing of young professionals to watch, and more recently, was featured in news reports by WSLS-TV and WDBJ7, on WFIR news talk radio and on Roanoke Valley Television.

Earlier this month, he was profiled by Roanoke College, where he earned his undergraduate art degree in 2009. 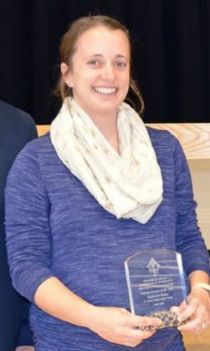 From student to novice to veteran

A former Highlander softball captain has won another accolade for her work as an educator.

Stephanie Bolin ’14 was recently named the 2022 Archdiocese of Washington veteran teacher of the year, chosen by faculty and staff members at St. Mary’s Ryken High School in Leonardtown, Maryland, according to a Dec. 12 article on Southern Maryland News Net.

A release from the school said, “Mrs. Bolin’s students learn to deeply read literature, to write clearly and effectively and to speak with heart and courage.”

Principal Catherine Bowes said Bolin “is a positive and focused leader. Her end-of-the-year notes for each of her department members always demonstrate her true appreciation for the gifts that each member contributes.”

Bolin also coaches softball at St. Mary’s and was a 2010 graduate of the school.

She has been on the faculty there since 2014 and was previously named novice teacher of the year in 2016.

Interlibrary loans are a curious fusion of old school and new, with the internet still transferring information, albeit via the printed word instead of the electronic kind.

The borrowers involved receive books from they know not where yet rarely form any sort of connection with the lenders themselves.

Not so in the case of Umar Lee, a writer, activist and podcaster from St. Louis, Missouri, who recently sought out a hard copy of Yohanan Friedmann’s “Messianic Ideas and Freedom in Sunni Islam.”

The edition that ultimately reached him, via interlibrary loan, sprang from a faraway locale – the New River Valley. Specifically, Radford University.

Lee took note of the tome’s embossed property stamp, and, on Dec. 14, he reflected upon it in a tweet.

“I love finding out where my interlibrary loan books come from,” he wrote on Twitter, alongside a photograph of the book’s title page, which bears the mark of McConnell Library. “In this case, I'd never heard of Radford University despite the fact that I used to live in Virginia.