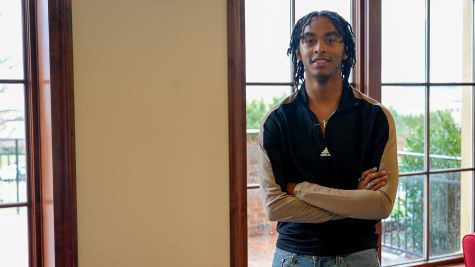 Visualize a stereotypical accountant, and the person you probably see is a buttoned-down, no-nonsense individual, focused far more on the bottom line than making conversation.

Then watch as accounting major Rashaad Jones ’22 smashes right through that mental image like the Kool-Aid Man – friendly, outgoing, and about as talkative as the day is long.

“I’m just taking myself where life takes me,” Jones said with a smile and a laugh the week before winter graduation.

“I’m really excited to start making big boy money,” he acknowledged, “but also really scared to, like, leave the best part of my life. Four years of college is the best time of your life; I don’t care what anyone says. You have ample time, and everyone’s telling you to explore every little facet of yourself.”

Early on, Jones did just that. He started as a computer science major but began to question whether the coding life was for him. Around that time, he found himself in an accounting class taught by an instructor whose enthusiasm made a big impression on him.

“The professor was, like, very adamant about this class, almost bloodthirsty,” Jones recalled. “And I thought, if someone likes this stuff as much as they do, there must be something to it. And here I am, four years later, graduating with it.”

“He’s not your typical accounting major. They’re primarily a reserved, introverted lot. And I didn’t know what to make of the guy at first,” Chatham remembered. “By the end of three classes, he became one of my favorite students. I just cheer for the guy. He’s done very well.”

Over the summer, Jones worked at the Virginia Beach office of the accounting firm Cherry Bekaert, and recently he accepted a permanent position with them as an auditor.

“It’s going to be really interesting. I already did an internship with them, and I really enjoyed it,” he said. “They meshed really well with my personality, and I felt like this is going to be a good fit for me.”

To business majors that follow in his footsteps, the loquacious Jones has just one piece of advice.

“Take a public speaking class. Take theater; it’s so much fun,” he advised, adding that being able to converse and express oneself is useful in any occupation. “It prepared me to be able to talk to people. It’s the reason I’m here now.”