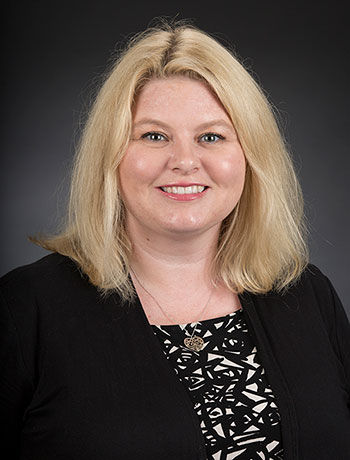 In the kitchen of William Faulkner’s Rowan Oak estate sits a black rotary telephone in the corner of two painted white walls, both of which are covered with handwritten messages from people who had called the writer over many years.

One message, for example, might read “‘Call Steve,’ and then Steve’s phone number would be beside it,” explained Courtney Watson, an associate professor of English at Radford University Carilion (RUC). “There are generations of all this writing on the kitchen wall.”

It’s a fascinating preserved detail that gives tourists at the Oxford, Mississippi, estate insight into the writer’s life. It’s also a detail that most visitors don’t see. “If you’re nice to the grad student who runs the place, sometimes you can go off tour and find the kitchen,” Watson said with a smile.

But included in the official tour is another remarkable detail from Faulkner’s life. When you walk up the steps to his study, you will find scrawled on the walls, in red and black grease pencil, the outline from his Pulitzer Prize-winning novel, “A Fable.”

“It’s actually written on the walls!” Watson said, still surprised from the first time she witnessed the oddity.

Faulkner wrote out what was to happen in “A Fable” over eight days, from one Sunday to the next. He began outlining the novel on papers which he taped to the walls in the study. However, a large fan he used to combat the Mississippi summer heat overmatched the tape, and the papers fell to the floor. So then he wrote his outlines directly on the wall.

“He wrote these with a grease pencil. It’s not coming off,” Watson said. “It’s very neat and very orderly, and it showed what a methodical thinker Faulkner was. You can stand there and picture him in his office writing it all down. That was really cool and really exciting.”

Watson is a literary tourist, a frequent visitor to sites like Rowan Oak; and Key West, Florida; and Monroeville, Alabama; and Paris, where writers like Faulkner, Ernest Hemingway, F. Scott Fitzgerald, Harper Lee, Truman Capote, Eudora Welty and Robert Wright lived, wrote, and set scenes that made them the beloved writers they are today.

Delving into the scholarship of literary tourism began when Watson, who grew up in Florida and adores Southern writers, was in graduate school and was truly inspired when she, her classmates and fellow literary enthusiasts took a midnight tour of the Oxford cemetery where Faulkner is interred.

Packs of cigarettes, bottles of bourbon and handwritten notes to William Faulkner were among the many items that turned Watson into a literary tourism scholar, which she explains more in this Q&A.

How did you get into literary tourism?

“I got my start as a literary tourist while I was in my Ph.D. program at the Center for Writers at the University of Southern Mississippi. I was lucky enough to take a class that was related to literary travel and tourism. Being in the South, we were focused on major sites that were in Mississippi, Alabama and Louisiana. We went to Jackson, Mississippi, the hometown of Richard Wright and Eudora Welty, and saw the places where they grew up. In Eudora Welty’s case, we saw the house she lived in her entire life, where she wrote all of her stories. We got to see that all for ourselves. I absolutely loved it.

Then I started going on more adventures. I lived in Mississippi for three years. I loved Southern writers, and I wanted to learn about them as much as possible. Also, it was at a time I had not really settled on what my area of scholarship would be. And this just seemed like a tremendous opportunity. I went to Oxford, Mississippi, which is where Faulkner was from and where he did the bulk of his writing, and I got to see all the places he mentioned in his books. It was so fascinating to me to see the fiction come to life and be in that physical space where he was.”

Do you have a favorite site?

“I will always, always love F. Scott Fitzgerald and Ernest Hemingway. Both of them had fascinating lives; they traveled extensively throughout the United States and globally. You can go to a lot of spots throughout the world that are associated with Fitzgerald and Hemingway tourism. And also, the ancillary writers who were in their orbits. I love the American expatriates who lived in France from the early 1900s to the 1940s. There are so many wonderful stories about the work they did when they were in France and Spain and Italy. I absolutely love that period of American authors in other parts of the world.” 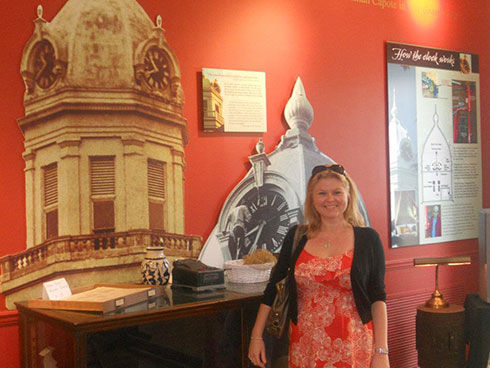 Watson stands inside the courthouse museum in Monroeville, Alabama, the site made famous as the trial location in To Kill a Mockingbird.

Was there a moment or place that hooked you on literary tourism?

“Yes, absolutely! I was in Oxford, Mississippi, home of Faulkner, and we were doing a midnight tour of the cemetery in Oxford. I thought it was a little strange at first. Around Faulkner’s grave is seating for visitors. We were English nerds, so we were reading our favorite passages from some of our favorite Faulkner works. While we were there, I saw all of these little mementos that people had left for him. He was a lifelong smoker, so people would leave cigarettes to him. He was a lifelong drinker, so there were all these little bottles of bourbon. There were messages that people wrote to him, and there were pens lying around. And I was like, ‘Oh, OK. It’s not just me.’ There is this whole community of people who come and see the places these authors lived and wrote. So, that was probably the moment I was hooked!

And then I had another moment in Key West. Everybody knows the bars Hemingway went to – Sloppy Joes is one of them that’s really famous – but there’s a neighborhood called Bahama Village that is sort of off the beaten path, and Hemingway did a lot of his writing there. There is this restaurant there called Blue Heaven, where he used to host boxing matches. The stories of him in that space are just so alive, and you can almost feel his presence when you’re there.”

Is there one particular item on a visit that has stood out to you?

“There are a lot of cool mementos in many of these places. Eudora Welty’s house is exactly as she left it in the 1980s. Many of the tours of these places are pretty strict. There’s no wandering off.

But Faulkner’s house is different, especially with the novel outlined on the wall. Seeing that, you can literally almost touch those stories! This is probably as close as we’re going to get to the great American novel, and it’s all right here.

It’s just really exciting to go to all the places authors visited and lived because a lot of those places are still standing. There’s a bookstore in Paris called Shakespeare and Company, and they used to lend out books to Hemingway when he was really young; it was right after he finished his service as an ambulance driver in World War I. He came back to Paris and spent all of his time there. They still have some of the books he actually read on display, and it’s this really cool tapestry of history you can see if you visit there.”

What are some local literary destinations where interested Radford students and members of the community can visit?

“We’re really lucky that Virginia is a very literary area. You can go to Richmond and see Edgar Allan Poe’s birthplace and go to Maryland and see sites dedicated to Poe. There is so much interesting history in this area, and there is a history of really vibrant writers. You can think about the local authors that you really like and explore some nearby sites associated with them. Virginia is a gateway to the South as well, and there are all kinds of places you can go in the South. A couple of months ago, I went to the O. Henry Hotel in Greensboro, North Carolina, and there is a beautiful ballroom where they host a tea service, and across the entire ceiling and panels and the wall were his stories, scrawled out all across the room. They tell you that he was there when he wrote this and that, and it’s just really cool and interesting to see space dedicated to an author that way.”

How do you incorporate your research into your teaching at RUC?

“All of my students are in STEM (science, technology, engineering and mathematics), or healthcare, so we often study the history of those writers who wrote about medicine, and it is really fascinating. In some of my literature classes, we’ll read the journals of Florence Nightingale and look at other major medical figures. I like bringing historical context into class. All of the writers we study had really deep thoughts about the work they did to change the history of medicine and the way we practice healthcare.

More than anything, I want my students to think thoughtfully about the authors and realize there is a whole person behind the stories we read from them.”