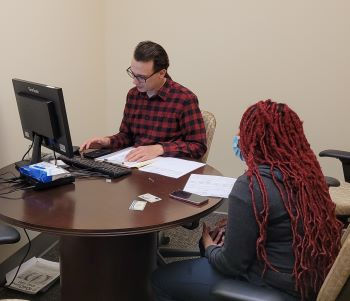 Earlier this year Dylan Jones '22 (left) was one of the Radford University volunteers who helped VITA file about 400 tax returns from across the New River Valley.

New River Community Action’s Volunteer Income Tax Assistance program isn’t what you’d call a massive operation – it consists of just one paid coordinator and a staff of volunteers – yet its efforts reach far and have considerable local value.

VITA provides free tax preparation and consultation to those making less than $56,000 a year. Between February and April, it filed returns for about 400 residents around the New River Valley and, in doing so, saved those taxpayers nearly $100,000, collectively, based on the average price for standard tax services.

“Essentially, it means they’re not going somewhere and paying to have their taxes done. They’re coming in and getting them done for free, and so that cost – usually about $250 or more – goes away,” said Lacey Desper, the VITA director for the New River Valley.

Desper, who started as VITA coordinator last year, said the program has a budget of only about $35,000, from a federal IRS grant and the Virginia Cash Campaign. With such modest resources, she knew she’d have to get creative to draft volunteers and find other means of assistance.

“I mass-spam emailed every accounting professor at Radford University,” she explained.

The strategy worked. One respondent was Wendy Li, Ph.D., an assistant professor of accounting and the faculty advisor for Beta Alpha Psi, the honor society for business majors.

Li said, “I believe VITA can benefit the candidates and members of Beta Alpha Psi and general accounting students, to gain some tax experience and contribute to the community at the same time.”

She put Desper in touch with Douglas Brinckman, Ph.D., head of the Department of Accounting, Finance and Business Law, as well as Joy Bhadury, Ph.D., dean of the Davis College of Business and Economics, who helped Desper connect with student volunteers and also provided her much-needed workspace in Kyle Hall.

“The office we got was more than we could have dreamed of,” Desper said. “We had a reception area, a place for incoming clients to sit, three offices and a conference room. It was fantastic.”

VITA’s headquarters are in Pulaski, Virginia, so having a second location on a bus route also gave the public easier access to the program, which covers an area that includes Floyd, Giles and Montgomery counties.

Doing people’s taxes isn’t the only service VITA provides. As clients dropped in for face-to-face meetings, a need for additional consulting came to light.

“You’d be surprised how much education the majority of the public actually needs on doing their own taxes,” she said. “We explain to people how their W2s interact with their Social Security and how that affects their taxes. We tell people why they’re owing money every year and what they can do to fix this.”

Desper and her staff were able to give general practical advice to some of the clients – such as one customer who was putting his finances at risk by pre-signing all his personal checks or the woman who hadn’t realized she’d been mishandling her federal returns for years and was owed $6,500, which Desper said she ultimately received.

“She was in tears by the time it was over,” Desper recalled. 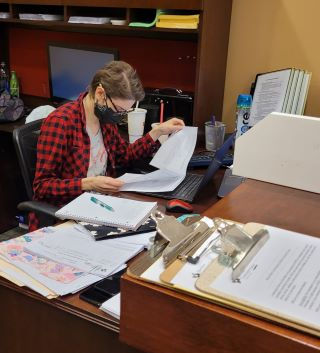 “I learned how to do taxes, which is a great thing,” said Sydney Carneal, a senior accounting major from Blacksburg, who volunteered 70 hours this year and prepared about 30 tax returns. "I want to be a certified public accountant after I graduate, and this definitely strengthened that."

Benefits extend to the campus as well. In addition to preparing returns for more than 40 students, VITA’s partnership with Davis College allowed three Highlanders and two high school students the opportunity to volunteer and receive several hours of training, familiarizing them with IRS procedures and affording them real-world experience.

“I learned how to do taxes, which is a great thing,” said Sydney Carneal, a senior accounting major from Blacksburg.

Carneal, who also works as a student tutor, volunteered approximately 70 hours of her time this year and prepared about 30 tax returns.

“I want to be a certified public accountant after I graduate, and this definitely strengthened that,” Carneal said, adding that she’ll participate in VITA again next year.

“A lot of students, they can come to us even if they’re still dependents and, if they work, they can get a tax refund for themselves, instead of having their parents file it,” she explained. “It takes about an hour, and we don’t keep any personal documents. You come in, you give us your information, we input it, we file your tax return, and then we give it back to you.”

Desper praised Carneal and the others for their efforts: “Without volunteers, there is no program,” she said.

She plans to link VITA with Radford University again next tax season and said she’ll take as much help as she can get, from citizens to students, business and accounting majors or otherwise. She’s hoping to add a social media guru to her team and would like to find a way to extend VITA into Floyd County, where a large percentage of this year’s clients came from.

“This started with me just randomly sending emails,” Desper said. “I’m excited to see where it can go, what it can become.”

The officials who helped link VITA and Radford University were pleased as well: “This is an excellent example of an external partnership that benefits the community as well as our students,” Bhadury said.

More information about VITA, including schedules, required documents, volunteer opportunities and what kind of services they can and cannot provide, can be found on New River Community Action's website.