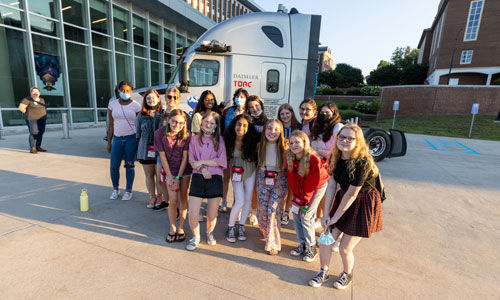 Participants stand in front of a TORC Robotics truck during their camp experience.

With a gentle touch to a screen, four propellers on the small black drone began to spin rapidly. The aircraft lifted from its orange launch pad and slowly climbed higher and higher.

Savannah Griffin did just that. Her thumb nudged the toggle, and the drone zipped high into the sun-drenched sky on a Wednesday afternoon.

“Bye-bye,” Griffin said with nervous laughter, looking upward and shading her eyes as the drone became smaller and smaller.

“Yaw left, then yaw right,” said Stephenson, a drone pilot and lab coordinator for Radford University’s Department of Geology. He soon followed with directions to pitch forward, which sent the aircraft zooming toward Young Hall.

Griffin giggled still with nervous energy. It was her first time flying a drone. It was also the first time for most of the girls out on the Radford University campus lawn. About six drones were in the air at once, with each pilot and instructor paying close attention to avoid the flight path of the others.

Suddenly, an invader sneaked over the air space.

“Helicopter in the air,” Stephenson warned. The chopper was way higher than the drones, but it was an unplanned, unexpected teachable moment about drone flight safety and awareness.

After several minutes in the air, Stephenson told Griffin how to land the drone. It required the touch of only one key on the controls. “It’s programmed to land itself,” Stephenson said.

And with another soft touch to the screen, the small aircraft, then hovering at about 50 feet, slowly descended back to Earth, its propellers fluttering the blades of grass as it touched down. 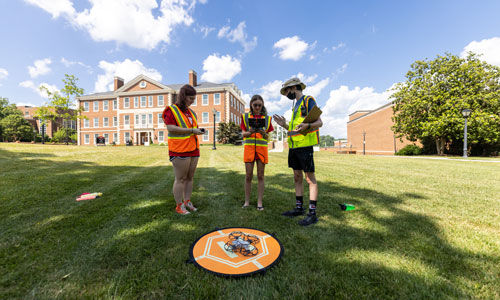 Students learn how to operate a drone.

“That was so cool,” Griffin, of Powhatan, Virginia, said, laughing with excitement. “I’m texting my dad and telling him I learned how to fly a drone.”

For more than an hour, these young women, who were students for a week in Radford University’s Summer Bridge: Women in STEM program, took the controls of drones, learning the ups and downs and ins and outs of remote aircraft fight. In between flights on the hot July afternoon, the university’s Department of Chemistry treated the campers to cones of liquid nitrogen ice cream, a staple of Radford STEM and science events.

“This was one of the things I looked forward to the most,” Sriyutha Morishetty said about flying drones at Summer Bridge, a weeklong residential camp for female high school students that offers hands-on learning experiences and provides a window into the world of science, technology, engineering and mathematics (STEM) education and careers.

“Actually, everything we’ve done this week has been really fun,” Morishetty, of Richmond, Virginia, said. “The planetarium was really fun, too.”

Over the course of the week, the STEM campers were in labs and classrooms all around the Center for the Sciences. They watched a show at the state-of-the-art Radford University Planetarium, learned about the chemistry of space, piloted drones, built surface rovers, launched rockets and engaged with women who work in science careers at Novozymes Biologicals and TORC Robotics.

This year’s Summer Bridge theme was Mission to Mars, “but it was really more of a space exploration broader theme,” said Summer Bridge program director David Horton. The students participated in activities related to power generation and transmission; remote and autonomous vehicles and rocket propulsion; the geology of Earth and other planets; and the biology and chemistry of space travel. There also was a “lost on the moon” exercise, Horton explained. 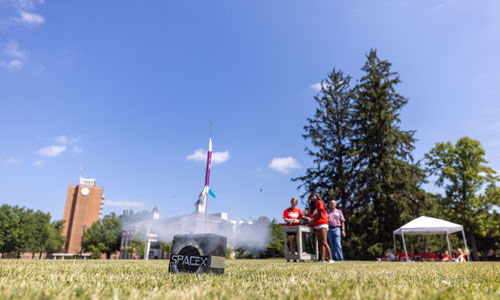 A rocket prepares to take off while students stand nearby watching the launch.

On Thursday night, the final night on campus, Assistant Professor of Physics Sandra Liss, Ph.D., took the burgeoning scientists to Radford University’s Selu Observatory for telescope night. “The weather didn’t fully cooperate – it was hazy,” Liss said, “but they got to see and control the telescope and dome.”

The camp was “really an eye-opening opportunity,” said Summer Bridge participant Llera Terry of Richmond, Virginia, who gushed about all the opportunities and activities made available to the campers in just a week’s time.

“I’ve learned a lot about building radios and biology and black holes,” she said on Friday morning, as one of the week’s most anticipated activities was blasting off behind her: the rocket launches.

During the week, the young women built their own rockets from kits, and on the last day of camp, they placed their creations one-by-one onto a launch pad. Radford Physics Professor Rhett Herman, Ph.D., assisted with the pre-launch prep, but the young women took it up themselves to help one another.

Ignition and lift off!

The rockets zipped high above campus, and after about five seconds, the launchers below could hear a popping sound as parachutes and streamers emerged from the rockets.

“This camp is great and has exceeded my expectations for sure,” said Izzy DeJohn of Christiansburg, Virginia, standing beside her friend, Terry, as a rocket zipped skyward behind them.

Taking it all in, Terry agreed. “I really like it here,” she said. “I like the campus; it’s really pretty. The teachers here are nice. It’s definitely an environment I like. And after this week, I’ve been considering going to college here.”

The 2022 Summer Bridge program was “among our best, and it brought together a wonderful group of students from all across the commonwealth,” Horton said. “The engagement of this group of young women gives me great hope for the future that the goal of encouraging more women to pursue and advance science and technology is moving forward. These students will change the world as they move through their academic and professional careers.”