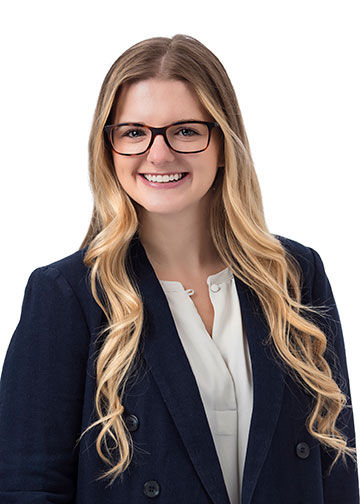 Olivia Simmons, ’16 has many memories of and connections to Carilion Roanoke Community Hospital (CRCH), now home to Radford University Carilion. From the time she was born until well after her graduation from college, she would return again and again to the downtown Roanoke landmark.

“I actually think my path was set beginning the day I was born,” Simmons says, “I just didn’t know it yet.”

From its opening in 1967 until 2007, CRCH was a fully functioning hospital, providing mainly pediatric and women’s healthcare services. Simmons was born at CRCH and went on to spend weeks in the 10th-floor pediatric unit when she became ill in the fourth grade.

Simmons’ family connections also tied her to CRCH. Both her grandfather and grandmother worked at and retired from there, and her mother also worked at the hospital for many years.

“I have so many ties to that hospital,” Simmons remembers. “It’s a really special place for me.”

After the owner of CRCH, Carilion Clinic, decided to consolidate services at Carilion Roanoke Memorial Hospital a mile down Jefferson Street, CRCH sat empty for a few years. In 2011, however, the building came back to life as the new home of Jefferson College of Health Sciences (JCHS) when the institution moved from a nearby location into the former hospital. JCHS was also owned by Carilion.

“I grew up dreaming of being a teacher, but after my illness, I started to imagine myself in the healthcare field,” Simmons says. “I spent so much time at Community Hospital that when I first heard about Jefferson College being located there, it became very appealing to me.”

When Simmons was a senior in high school, she was trying to decide where to attend college along with her classmates. She says that one day, her grandpa invited her to meet him for lunch in the cafeteria at what had become JCHS.

“He gave me a tour of the entire hospital,” she recalls. “He even bought me my first Jefferson College T-shirt in the bookstore and took me to the 10th floor, which long ago was the peds floor where I had spent some time while sick. It was clear at that moment that I wanted to attend college there, so I applied that same day.”

Initially, Simmons joined the Bachelor of Science in Nursing program, but she changed her major after a conversation with Carey Peerman, Ph.D., an assistant professor in what was then the healthcare management program. (The program has now transitioned to the Bachelor of Healthcare Administration at RUC.)

Simmons has fond memories of the time she spent studying to become a healthcare leader.

“I met some of my best friends in the program and at the college,” Simmons says. “I was able to see my grandpa almost every day that he worked there until he retired, and I was able to gain a wealth of knowledge and skills.”

Simmons praises the close connections she was able to make with faculty as well. While a student, she participated in the work study program and found it extremely rewarding.

“Not only was I able to get paid to study, but I was able to participate in many projects for the department and meet some really great professors and staff who I still keep in touch with.”

Simmons cites the unique opportunities offered to students in the healthcare leadership programs at what is now RUC as one of the leading reasons she would champion others to enroll. (JCHS merged with Radford University in 2019 to form RUC.) With the plethora of healthcare organizations in the Roanoke area, students have the chance to work with a variety of health professionals in many different fields.

“My last semester in the program, I was granted an internship, but I hadn’t heard anything about mine yet,” Simmons says, adding that she was nervous about where she would be interning. “Then, one of my program leaders sat at the same table as someone from HCA Healthcare at a  dinner, and the next thing I know, my friend Megan Fordham and I are starting our internship at LewisGale Physicians in Salem.”

That kind of personalized, hands-on instruction and care for students is a plus for students at RUC. Simmons says that the internship allowed her to work alongside many wonderful people in various roles, from medical office specialists checking in patients to the director of operations and market manager.

“That opportunity, along with everything I learned in the classroom, truly opened up doors for me in my professional life,” Simmons says.

After graduating in May 2016, Simmons was hired full-time by LewisGale Physicians, coordinating undergraduate medical education. She says one of the first things she did was start an internship similar to the one she had to provide some of the same great experiences for other students.

“Creating that opportunity was truly rewarding for me,” she says.

In addition to her role at LewisGale, Simmons also continued building upon her education, earning a master’s in business at Liberty University. In 2018, she moved to Nashville, Tennessee, to work in HCA Healthcare’s corporate office, but Southwest Virginia was calling her back home.

“In July 2021, I was able to come back home to Botetourt County, where I grew up,” Simmons said. “My current role as the division director of graduate medical education combines both of my dreams of working in education and healthcare.”

Simmons has oversight of operations of three teaching hospitals and is working to develop two more.

“I work with LewisGale Regional Health System’s two teaching hospitals, LewisGale Medical Center and LewisGale Hospital Montgomery, as well as with Portsmouth Regional Hospital located in Portsmouth, New Hampshire. I very much enjoy the work I get to do with residents and medical education,” she says.

To prospective students looking at joining the HCA program at RUC, Simmons says go for it!

“The professors and staff truly make the program excel, and I have many of them to thank for helping me get to where I am today in my professional life,” she says.

Learn more about the RUC Healthcare Administration program and the other programs in the Department of Public Health and Healthcare Leadership on the Radford University website.