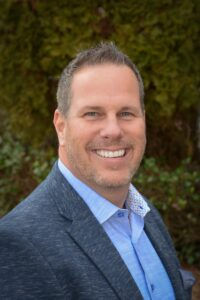 The American workforce is so vast, it currently consists of members of no less than five different generations – Traditionalists, Baby Boomers, Generation X, Millennials, and Gen Z.

Together, they run the gamut from teenagers on the low end, to octogenarians on the high. Some of those elder hands were born during World War II, while more and more of the newer crop emerged after 9/11.

That’s a dauntingly diverse crowd, all contained in a professional realm that’s constantly being reshaped and retextured by technology, culture, politics and other factors.

Someone who understands the ongoing challenges of cultivating, leading and maintaining employees under those conditions is Michael Clegg ’99. He’s the CEO of The Q Works Group, a talent management company in North Carolina that focuses on hiring and retention.

On July 28, Clegg spoke at the Business Development Forum luncheon, presented by the Radford-Blacksburg Technology Council and hosted at Kyle Hall by Radford University’s Davis College of Business and Economics. In addition to mentoring students, Clegg also serves as a member of the Davis College advisory board.

“Everything has changed. The complexities of hiring and firing are changing daily, the expectations that people have and want and need are changing daily… literally daily,” Clegg told the attendees. “The pandemic, clearly, has changed it a lot. But what we have to understand is, it’s never going back to the way it was.

“A lot of people ask me: Do you think this is a good change?” he added. “My answer is overwhelmingly ‘Yes.’ It is. It is great.”

In order to navigate it, however, he said management will have to adapt as it goes, and he discussed some of his methods for doing so in his talk, “New Culture for a New Generation.”

One tool he described is the stay interview. Those are general, one-on-one conversations employers can conduct to better understand why workers choose to remain with their companies, and to identify the factors that could cause them to leave.

A story he shared regarding stay interviews centered around one promising employee he nearly lost.

“She had been crushing it since the day we hired her,” and had just been promoted to a position in sales, Clegg said. Soon after she was elevated, however, he was stunned to learn that the woman wanted to quit.

As they discussed her situation, he recalled, she eventually revealed what the problem was: “She said… ‘This is embarrassing, but I just don’t have the clothes to be out with the clients. I don’t have professional attire.’”

On the overall scale of employee issues, it was surprisingly small, but for her it was large enough to be debilitating, and it needed to come to light in order to be addressed. Clegg said he simply gave the employee a Stitch Fix clothing subscription and, with that, their problem was solved.

“It cost the company $1,000,” he said. “But I probably have a loyal employee for life now, just because of one thing that I would have never known.”

“If you hear nothing else that I say today, pay attention to the stay interview,” Clegg advised. “The stay interview will change your life and, potentially, the lives of those you’re having these conversations with.”

While employers do need to engage with workers, he warned against the trap of being a manager who simply does whatever it takes in order to be liked. Respect and trust are equally integral components to work relationships, Clegg noted.

He cited statistics that show that Baby Boomers are 13 times more likely to stay in a job that bears a high trust culture; Gen Xers and millennials, respectively, are 16 and 22 times more liable to remain.

“If we want higher retention, we need to give time to the individual, not to the workforce as a whole,” Clegg said. “Time is the leader’s currency. That is the cost and the price that we have to pay to have a great culture, to have high retention.

“It’s important to understand that organizations that are able to identify tactics to change, and identify the needs and expectations of the workforce, those are the ones that are going to win.”