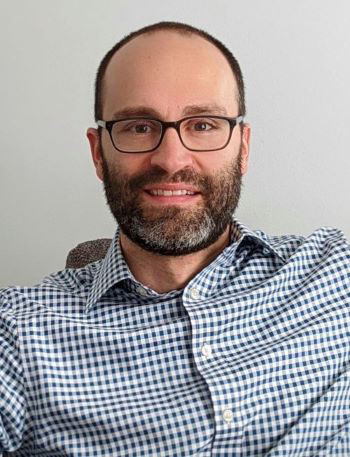 Today, Andrew Pierce ’09 is the acting chief financial officer for the Peace Corps – the United States’ sprawling volunteer force that provides social and economic development assistance around the globe – but recently, he recalled that when he first earned his bachelor’s in economics and marketing, he was not naturally drawn to philanthropic efforts.

“Coming out of college, I needed to pay student loans. I needed a job; I needed to make money. I wasn’t looking for opportunities to volunteer, necessarily,” Pierce told a crowd of students, staff and faculty at March 24’s Truist Global Capitalism Lecture, a series presented by the Davis College of Business and Economics and hosted by Dean Joy Bhadury, Ph.D.

From the outset of his talk, however, Pierce made clear he had two goals he wanted it to accomplish: To describe the path he took once he finished college and “to make a pitch for public service.”

Not long after graduation, he and his wife, Angela Pierce ’09, moved to Washington, D.C., where he began working for IBM and where, across his five years with that company, his volunteer work would take root and flourish.

"They [IBM] had this thing called the Corporate Services Corps that I had never heard of, and ... it was basically, they would do consulting projects, pro bono, for free,” for local schools and nonprofits, Pierce explained.

“You could apply to be part of this program, continue to make your salary, but then go and do this thing that was giving back, basically,” he recalled.

Pierce said that in the early 2010s, he and his wife also found a unique way to balance their dearth of vacation time with their desire to travel. They volunteered with Habitat for Humanity, and he went from making spreadsheets and creating reports to taking occasional treks southward and participating in global building projects. First to Costa Rica, then to Trinidad and Tobago and after that to Guatemala.

On the Trinidad excursion, Pierce said, “there was a shed, basically, that a whole family was living in, and we were adding a room to their house – doubling the size of their house.

“That really pulls you outside of yourself to witness that kind of thing ... see it firsthand. This stopped being about just sort of having fun or doing sort of an interesting vacation, and it started being as if there was a lightbulb that went off,” he said.

In 2015, he left IBM for a job at the accounting and consulting firm Grant Thornton. After a couple of years, he pivoted to work with the Peace Corps – first as an accountant, then as director of accounting, and eventually, in 2017, as acting CFO.

During that time, he was also expanding his efforts for other nonprofits, including Homes Not Borders and the International Rescue Committee, and joining the environmental advisory committee for his new home base of Bowie, Maryland.

In his address, Pierce reflected on his ongoing desire to give back and the experiences he’d gained in accomplishing that goal, including a relatively minor but still vivid injury he suffered while working on a remote construction project.

“That’s exposing you to something that you would otherwise never see,” he said. “Even if you didn't buy into the altruism, the idea of giving back to your community is a good thing to do. There's still a benefit to you, personally, in going and stretching yourself. "

Pierce also answered questions from students and gave them suggestions for success once they start to enter the workforce. Don’t fill a resume with jargon or exaggerated descriptions, just be honest and straightforward, he told them; foster dreams rather than simply following them.

And in seeking out opportunities for growth, aim for quality over quantity.

"Diversify yourself. And that doesn't mean go and get 10 internships,” he suggested. "Go volunteer for something that speaks to you, that challenges you and gets you to do something that you weren't expecting. Then take from that experience what you can, even if it's painful. Something that shapes you as a person."

“And it goes on your resume. It goes in your memory. It goes into your life story.”