With mobile burn unit, students investigate in the heat of the moment 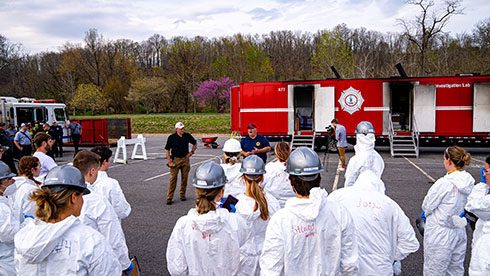 At nearly 1,300 degrees Fahrenheit, it took a little more than four minutes for a small fire to turn a small cozy bedroom to turn into a charred disaster.

A twin bed. Stuffed animals. A tennis racquet. Playing cards. The Christmas stocking, hanging on the wall with the name Austin written in silver glitter across its furry cuff. So many things in the room were reduced to ashes and memories.

Fortunately, the scene was not real – it was staged for educational purposes – but Todd Jones ‘88, M.S. ’94, has seen this scenario way too many times throughout his long career as a fire and insurance fraud investigator.

Jones also is an adjunct instructor in Radford University’s Department of Criminal Justice. He teaches students enrolled in his fire and arson investigation course about what to look for when investigating a fire.

“We study the methodology from the ground up,” Jones said. “The students learn how to safely approach a fire scene, what to look for and evidence collection. They also learn how to put all of their knowledge together to determine the cause of the fire.”

Near the end of the semester, Jones brings to campus one of three mobile burn trailers owned by the Virginia Department of Fire Programs. It has three rooms that Jones decorates like a kitchen – “most home fires start in the kitchen,” he said – a living room and a bedroom.

Once the decorating is complete, he strikes the matches, first in the bedroom at the far right of the trailer and then in the kitchen.

Jones has been bringing this hands-on learning experience to Radford University students since 2014, and the most recent was on a sunny but windy day on April 13, 2022.

“This exercise gets them [students] the experience of putting together a case from the beginning using scientific methodology,” Jones explained. “It’s not always easy to determine the cause of the fire and whether it was arson or an accident. I want the students to look at the evidence, look at what they see and ask, ‘does it match the hypothesis?’”

The setup and ignition

The trailer sat on a Wednesday afternoon on the university’s parking lot Z, behind the Dedmon Center and about 50 yards from the New River. Jones worked throughout the morning to stage each room. Local retail stores and the Blacksburg YMCA donated some of the items. This year’s event had some Christmas cheer before the fire came through.

It was 3:16 p.m. when Jones ignited the living room. The Christmas tree quickly went up in flames, as did the presents underneath. The plastic baby doll melted, and the small stuffed white pony with a pink heart on its side smoldered. The drapes were gone in seconds. Firecrackers underneath the tree popped as black smoke rolled out of the trailer’s door and roof vent.

About four minutes into the blaze, volunteers from Radford Fire and Rescue extinguished the fire with a hose from one of the two fire trucks parked just feet away. Members of the Blacksburg Fire Department were also on standby.

Fourteen minutes after he started the first fire, Jones ignited the kitchen, completely decorated with a stove, candles and a pizza box on the floor.

“I try to make it look as realistic as possible,” Jones said. “When it burns, I want it to look like an actual house fire.”

He saved the bedroom for last. 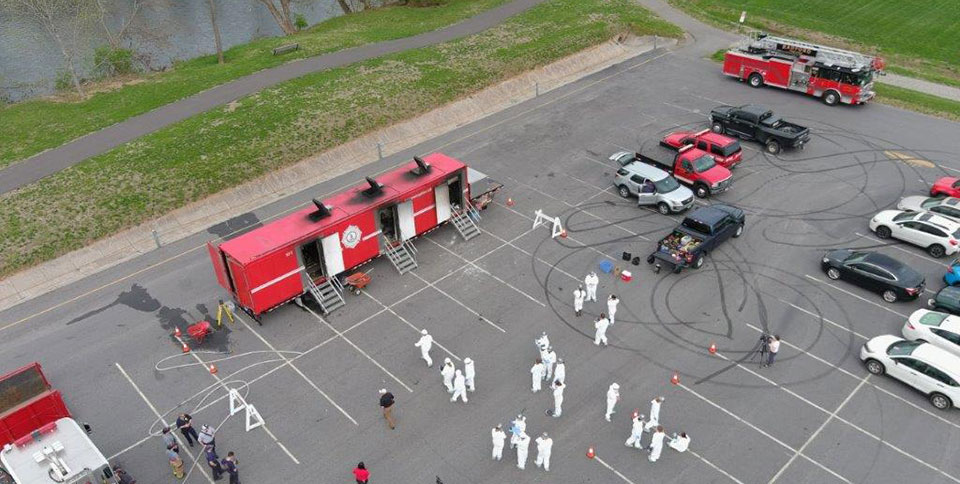 “I want you guys to see how fast it goes,” Jones told his students when they arrived 90 minutes later.

At this point, each student had dressed in full-body white protective gear. They wore white or gray helmets, gloves, masks and slip-on shoe protectors. Jones had them turn their backs as the bedroom blaze was doused with water. He didn’t want them peeking into the scene too soon and perhaps getting a false impression of the supposed cause of the fire.

The instructor huddled his students as the trailer cooled and the smoke cleared. He gave them one last talk before they went into the burned rooms; it was a five-minute refresher of what they had learned in the classroom the previous 12 weeks.

Jones also introduced his students to Steve Phillips, chief deputy of the Virginia Fire Marshal Academy, who offered some words of advice. “Start looking as soon as you hit the front door,” Phillips said as some students nodded, eager to enter the smoldering scene. “Look at all your surroundings. You’ll be amazed at what you’ll see.” 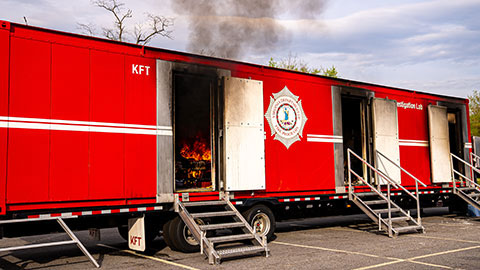 Once it was time to enter, the students climbed the silver metal steps into their assigned rooms. They examined the least burned spaces and moved the most burned because “the most burned sections may not be there anymore,” explained senior criminal justice major Vladimir Perez.”

As the students began their investigations, Jones spoke with local TV reporters about the course, the investigation exercise and the benefits of both.

“At the end of this course, even if these students do not become fire investigators, they now have this knowledge to take with them into their everyday lives and into the career they choose,” Jones said. “All of these students are criminal justice majors, so whether they go on to be police officers or social workers or to work for Homeland Security, they can now take information and build it into a cohesive presentation.”

As the students sifted through charred and ashy evidence, Jones, whose full-time job is to investigate fires in Virginia from Lee County to Harrisonburg, explained the difficulties of determining the source of a fire and whether it was accidental or arson.

Each student team spent about 20 minutes in the room they investigated. They took measurements and made graphs, snapped photos of the scene and collected the necessary items to build their case and file a report, which they would later present to the class with a judgment on how the fire ignited and whether it was an accident or arson.

“My job was measuring,” said Kristen Cadden, a junior from Richmond. “I measured the length and width of the room, and then the bed, the nightstand and the trash can and marked where the two chairs were in the room.”

She then documented the location of a power strip and labeled it as a potential fire source. As Phillips instructed, “You always have to have your eyes open for anything,” she said.

The first thing that hits you is the smell,” Perez said about entering the trailer after the smoke had cleared. “Even with the mask on, you could smell the char and the burning.”

But that’s part of what made the experience so real and valuable.

“You can watch videos and read textbooks about this all day, but to see it happening and get a chance to go inside and investigate a fire scene is a pretty amazing experience,” Perez said. “You could walk in and see the cigarettes, the burned wires, the hot glue gun. That made it real.”

That is the purpose of the exercise for Jones, and the reason he continues to bring to campus the mobile burn unit, which is unique to Radford University and is used to train fire marshals in Virginia.

“If these students go on to become fire investigators, this is a great course for them to get that knowledge,” Jones said. “But if they do something else in their careers, they are still going to have this knowledge and are going to be great ambassadors to their families, their friends and their neighbors about fire safety.”

It’s a “top-tier” course and education, said Perez, who plans to work as a police officer in Texas.

“I think we’re the luckiest and most fortunate students in Virginia and the country to have this,” he said, still donning his safety gear. “I’m glad Radford gives us this experience.”