Highlanders in the News: Week of April 4

The annals of mammals

Hundreds of species of mammals remain unidentified, according to a new study written in part by a Radford University assistant professor of biology.

That estimate in itself is not surprising – it’s believed that fewer than 10% of Earth’s species have been formally cataloged – but the report also gives a rough idea where many of the anonymous mammals can be found.

Right under our nose, as it turns out.

Tara Pelletier, Ph.D., is one of the authors, along with a professor and three other graduate students from Ohio State University, of the study published March 28 in the Proceedings of the National Academy of Sciences. Ohio State News posted an article about it the same day.

The group’s findings suggest that many smaller-bodied mammals – bats, rodents, shrews and moles – haven’t been identified because they so closely resemble other animals that are already known yet could still be different species.

“You can’t tell they are different … unless you do a genetic analysis,” said OSU professor of evolution Bryan Carstens, one of the co-authors, along with Pelletier, Danielle Parsons, Jamin Wieringa and Drew Duckett.

The team used a supercomputer to examine millions of gene sequences and environmental data from 4,310 mammal species.

Carsten estimates that approximately 20% of the planet’s mammals remain unidentified.

Numerous other examples of these unknown species might also be found in tropical rainforests, which are typically home to enormous arrays of organisms.

The team’s study was also reported by a string of online news sites and journals, including EurekAlert!, Science Daily, and Nation World News, among others.

Rent-All celebrates a half century of helping others

A longtime Radford fixture perpetuated in part by two generations of Highlanders, the New River Valley Rent-All recently celebrated the 50th anniversary of its opening.

The West Main Street store offers a wide array of temporary-use items, from heavy equipment and tools to tents, chairs and dining ware.

In a March 27 business profile, Pulaski County’s The Patriot spoke to the store’s general manager, Dan Leary ’95, about its role within the town.

“More than equipment, we have solutions to help people solve their problem,” Leary said. “Sometimes people call and ask for a certain piece of equipment, but it might not be appropriate for the job they are doing. We ask questions to help them choose the right piece for the job.”

The business was founded on March 13, 1972, by his father, Linton Leary, a former instructor of both biology and scuba diving, and his mother, Grace Leary ’93, who earned her M.S. in psychology.

Dan Leary’s son, Rob, is a tent crew chief and marks the third generation of Learys to work at the business.

“We are planning to stick around for many years,” Dan Leary told The Patriot. “But maybe not another 50.” 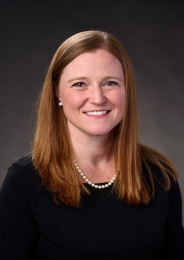 In an effort last month to acknowledge the second anniversary of the COVID-19 pandemic, Counseling Today reached out to educators, therapists and other mental health professionals to ask what insights they had gained in the interim.

“The past two years have demanded creativity, advocacy, flexibility, compassion and a seemingly endless list of other qualities. And for all counselors, it has been a learning experience,” the magazine wrote on March 1.

In her essay, Sanders first describes the physical – how she used an old sewing machine to fashion homemade masks for her and her family – before reflecting on ways the time challenged her to consider her relationship to the past, present and future and to embrace “stillness, commotion, loss, gain, choice, understanding and peace.”

Sanders’ full essay, as well as the others’, are all collected online at Counseling Today.