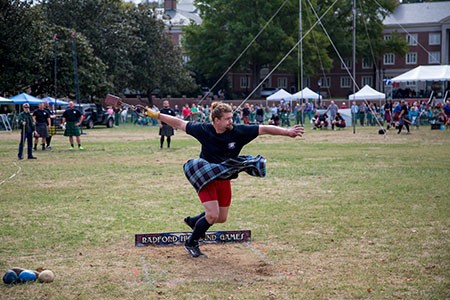 Food, games, live entertainment and more will again be part of the Radford Highlanders Festival scheduled for Oct. 9, 2021, on the Radford University campus.

The annual festival celebrates the region’s Scots-Irish heritage and is presented through a partnership between Radford University and the City of Radford. The festival is open to the public, and admission is free.

Each year, the Radford Highlanders Festival presents musical acts for the audience’s listening pleasure, and this year SYR, a Celtic folk-rock band from Columbia, South Carolina, and the folk music duo Kinnfolk will take the festival stage.

SYR gains its inspiration from Celtic history, stories and myths to create songs with broad-audience appeal that blend themes of battle, love and victory along with celebrations of the Celtic nation’s heritage.

The duet of Josh and Julie Kinn formed Kinnfolk in 2018 and present a Celtic folk music sound using bouzouki, bodhran and smooth vocal harmonies. They released a self-titled album in the spring of 2020, and their first original single, “The Borden Set,” later that year.

PanJammers, an award-winning steel drum orchestra based in Blacksburg, Virginia, will play on the Clocks Plaza at 11:30 a.m.

In addition to live music, festival-goers can seek out unique experiences such as sheepherding demonstrations, children’s games and pipe and drum bands. Several unique craft and food vendors will be on hand, offering authentic Scottish fare, classic festival food and American classics, such as barbecue and funnel cakes.

A massed band performance and Scottish clans march is again scheduled for this year’s festival. Clans, a concept dating back to the 12th century, were extended networks of families who had loyalties to a particular chief. The word clan is derived from the Gaelic 'clann,' meaning children.

Today, the Radford Highlanders Festival provides descendants of area clans and society's an opportunity to register and proudly showcase their family's heritage.

The popular Tom Raisbeck Memorial Games again will feature the traditional “heavy games,” events and competitions associated with rural and military life, including weights for distance and height; the stones, similar to modern-day shotput; the sheaf toss; and the crowd-pleasing caber toss.

"I'm so excited for the games to be happening again and as always very proud to be a part of it,” said heavy-games athlete Chad Clark, the athletic director. “Radford is very special to me because many years ago, it was the first games I ever attended, and I immediately became hooked. I love the sport more than words can convey, and to me it's important to keep the sport alive, going and growing to continue the tradition of Scottish heritage and culture."

The Highlanders Festival began in the mid-1990s with about 3,000 people attending. Over the past 25 years, the festival has more than tripled in size and now attracts an estimated crowd of 10,000 people each year.

To learn more about the Radford Highlanders Festival and to complete a vendor registration form, visit www.radford.edu/festival.