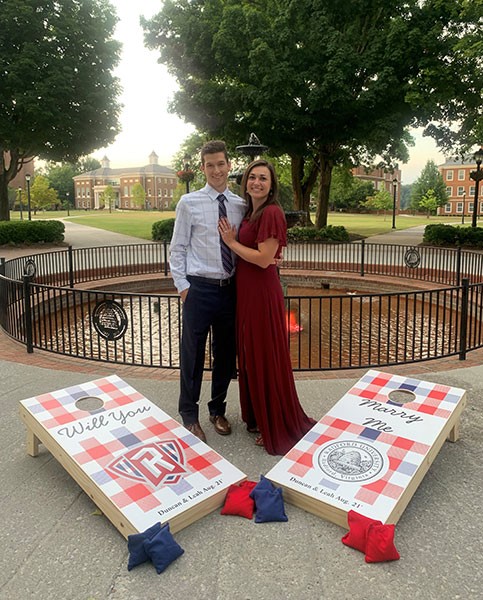 If love is blind, as the saying goes, it probably doesn’t care much about romantic settings. Moonlit gardens on enchanted evenings may be nice, but you’re just as likely to find true love over a game of cornhole. Just ask Duncan Sandoz ’20 and Leah Stepp ’21.

“Duncan and I met at the Junior Twilight on April 10, 2019,” Stepp said. “Duncan was playing cornhole with his friend, and I wanted to play with my friends. Duncan and his friend asked if we wanted to play. After playing cornhole, we spent hours talking as a group even after the event was over. Before heading back to the dorms/apartments, we all exchanged Snapchats.”

Their happy relationship continued through the rest of their time at Radford. Sandoz logged hours studying in McConnell Library and working out at the gym; Stepp concentrated on building her teaching career, squeezing in tennis and extracurriculars between her classes and school placement. After graduation, Sandoz took a job in risk management in Roanoke, Virginia, his hometown. Stepp prepared to pursue her master’s degree in special education K-12 while working part time at a Blacksburg child-care center.

When the time came for them to take the next step in their lives together, Sandoz thought there was only one perfect way to pop the question. And one perfect place: the Radford campus.

“We met playing cornhole, so I wanted to recreate the night we met,” Sandoz said.

“It took about three months to put all the pieces together,” he said. “Starting with contacting the five friends that were there the night we first met, two of whom lived in different states. When it was time to buy the ring, I found out that it had to be custom-made to what I wanted. Then, I had to custom-make the cornhole boards. Within these three months, we would walk around campus secretly preparing her for the big day.”

That was nothing, he said, compared to the hardest part: “facing her father and asking for his permission.”

In the end, the top-secret mission went without a hitch. With the friends rounded up, the cornhole games assembled and Stepp’s dad on board, it was time for the big moment.

“I was genuinely surprised about the proposal,” Stepp said. “Everyone kept it a secret from me for so long. I was so blown away I cried before he even got down on one knee.” While she wondered why they were walking around campus in nice clothes, “we would always take walks around the campus in the afternoon, so I really didn’t put too much thought to it. He said earlier in the week we were going on a fancy date night.”

Sandoz and Stepp, who both enjoy the summer months, are tentatively planning their wedding for July 2022, with a beach honeymoon to follow. There’s a lot to look forward to and many memories to cherish. And they owe it all to the Junior Twilight.

“When meeting that night, we had no idea what would become of it,” Stepp and Sandoz said. “We love that Radford created an opportunity for us to meet.”