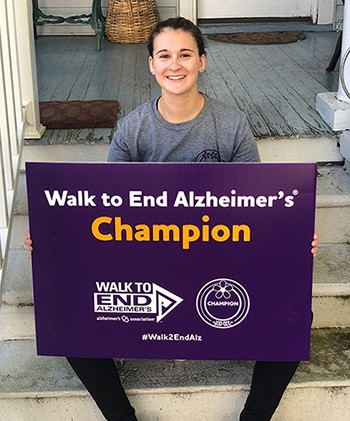 Sally Sroge is determined to help find further treatment and a cure for Alzheimer’s disease in the near future. The third-year Radford University Carilion (RUC) Doctor of Physical Therapy (D.P.T.) student has spent the last few weeks recruiting her classmates to join her team for the annual Walk to End Alzheimer’s.

Held annually in more than 600 communities nationwide, the Walk to End Alzheimer’s is the world’s largest fundraiser for Alzheimer’s care, support and research. It is organized by the Alzheimer’s Association. Walks will be held in Roanoke on Oct. 30, 2021, and in Radford on Nov. 6.

Sroge organized a team of her fellow students last year as well and helped raise $4,000 for the Alzheimer’s Association.

“Our team’s goal this year is to match last year’s amount raised,” Sroge said, “but it would be even better to beat it! I know we can do it.”

Sroge is so dedicated to the event and helping raise funds for Alzheimer’s research because her family has been directly affected by the disease.

“We lost my grandfather to Alzheimer’s disease in 2014,” she said, “and my family has been involved with the Walk to End Alzheimer’s in my hometown of Boulder, Colorado, ever since.”

Sroge said she felt that starting a team for the walk with her classmates made sense. Alzheimer’s affects a large part of the patient population they work with. Plus, the event would provide them with a way to connect to the Roanoke community. She began her recruitment through social media and word of mouth around the department. 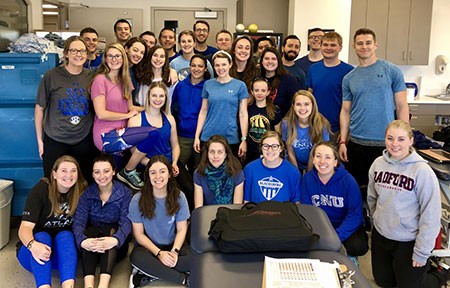 “Many students are returning from last year to join and are excited that the walk will be in person as last year’s walk was virtual due to COVID-19,” said Sroge. “I have had others outside of the program sign up to do the walk independently through sharing on social media, which is incredible to see the community get involved.”

Sroge hopes to see even more folks from RUC and the main campus sign up and get involved in the walks that will be taking place in Roanoke and Radford in coming weeks. Updates on the RUC D.P.T. team are posted at https://act.alz.org/goto/RUDPT.

“It’s a great way to check our progress and donate to the team,” Sroge said, noting that updates will also be posted on the DPT social media accounts on Instagram, Twitter and Facebook.

Sroge, who expects to graduate from the D.P.T. program in May 2022, says she hopes to continue her work with the Alzheimer’s Foundation and the Walk to End Alzheimer’s after graduation by raising awareness and staying connected with the community.

“As physical therapists, we will be working with a large population of people who will be affected by Alzheimer's disease,” Sroge said. “Providing quality physical therapy care to those with the disease is essential to the individual and their families. I’m happy I will be part of that care.”

For more information on joining or donating, visit the RUDPT 2021 Walk to End Alzheimer’s page or e-mail Sally Sroge at sroge@radford.edu.