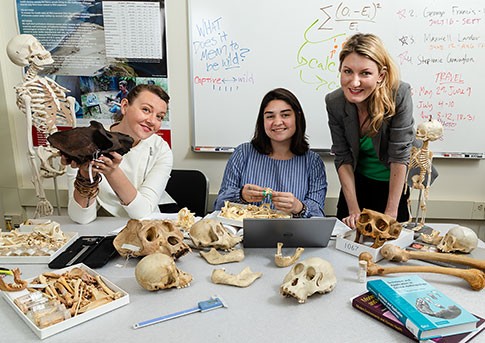 Sadie Friend ’20 (center) poses for a photo during her 2018 internship at the Smithsonian’s National Museum of Natural History. Also in the photo are Andrea Eller (left), postdoctoral research fellow at the museum and Sabrina Sholts (right), the museum’s curator of physical anthropology. Photo provided by Friend.

Sadie Friend ’20 spent much of her summer in 2018 sitting behind a small desk sorting through storage containers filled with chimpanzee skulls.

One by one, she recorded onto a computer intricate details about each chimp; items such as its sex, from where it was recovered and how the Smithsonian’s National Museum of Natural History (NMNH), where Friend was interning at the time, acquired each cranium. She also was tasked with meticulously examining each skull, searching for signs of disease and trauma in the bone and signs of cavities in teeth.

Periodically, Friend’s mentor at the Smithsonian would check in to ask the intern if she needed guidance or had questions. One day, there was one specific skull that stood out. It had noticeable punctures that no one at the NMNH had observed or recorded in the years the skull had been in the museum’s collections.

“I was doing my normal survey, and that’s when I saw the marks that, from what I have learned and seen previously at Radford, looked like puncture marks,” Friend said, harkening back to lectures and labs she attended as anthropological sciences major at Radford University. After further examination, Friend, her mentor and a team of NMNH anthropologists determined the marks were punctures, likely from a leopard’s bite.

It was a “chomped chimp,” as Friend and the group wrote in an academic article published in January 2020 by the American Journal of Physical Anthropology. “Quantitative comparisons confirm that the size of the tooth marks on this chimpanzee cranium overlaps the size of tooth marks inflicted by leopards and other carnivores on similar-sized prey,” the group concluded in the article.

This particular chimp skull had been collected from the southeastern forests of Coté d’Ivoire, where it most likely shared a habitat with leopards, Friend and her co-authors explained.

The discovery was important because “there is not much recorded evidence of leopards scavenging on chimpanzees because they are both predators in their own environments,” Friend said recently from her home in California, “and it is very rare to see actual evidence of a leopard leaving their bite marks on the cranium of a chimpanzee.”

Friend’s findings got the attention of the science world and also editors of Discover magazine, which is including an article in its November/December 2021 issue titled “How Leopard Kills Rewrite Our Prehistory.” The article notes the importance of Friend’s discovery and connects it with human history, claiming that “such a moment is an echo of prehistory, when our own relatives and ancestors were apparently upright sources of sustenance to leopards. Our predecessors couldn’t have known that we’d one day learn to read such marks, reminders of a time when we were prey.”

Reading “such marks” is a skill Friend learned at Radford University, studying in the Department of Anthropological Sciences, which places a high priority on providing students with direct, hands-on experience in the field and lab, including involvement in ongoing faculty research projects.

“Dr. Urista and Dr. Boyd were absolutely wonderful, and they were always engaged with us students,” Friend said. “They were great role models, not only as professionals in their field but as teachers. They were always there to help, and they taught me well. They always went over and above my expectations.”

Friend’s experiences at Radford helped shape the educational and professional journey that she is now continuing at California State University, Chico, where she is a graduate student in the biological anthropology program. Friend has a little more than a year and a half remaining in the program and plans to later “apply for jobs and Ph.D. programs, she said.

“It’s all about the experience for me,” she said. “I hope to finish my Ph.D., and I do want to become a practicing forensic anthropologist,” following in the footsteps of some of her mentors at Radford University.