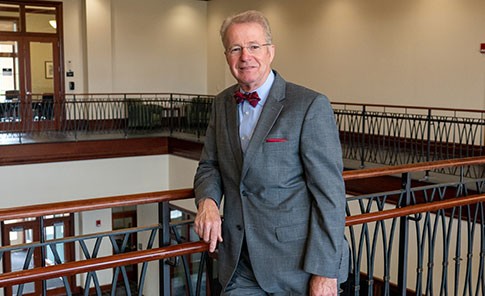 Lollar knows the precise number of students because he has kept every single class roster, the most recent being on his laptop and the older rosters handwritten on the light green pages of soft-cover ledgers he stores in a bottom drawer in his office.

The fact he has kept the rosters so close to him could be a metaphor to describe Lollar’s approach to teaching and to the way he lives his life.

Teaching and living, he said, are “about helping people meet their needs and being alongside them to help them develop their potential.”

Lollar learned to value education early in life. He grew up poor in rural Samantha, Alabama, and was one of 12 children. His father, Coleman Grady Lollar, had a fifth-grade education, and his mother, Carrie Maxine Lollar, went to school through ninth grade. “They knew getting an education was important, so they made sure I got on the bus every day,” he said.

At age 15, Lollar moved out of his parents’ house — “with their blessing,” he quickly noted — to begin working full-time at an Exxon gas station, pumping gas and working on cars.

He went to high school in the daytime and worked six hours each weeknight and 10 hours a day on Saturday and Sunday. Fridays were his only day off — because of football. “It’s Alabama,” he said with a smile. He didn’t play but instead served as his school’s marching band drum major under the Friday night lights.

After graduating from Northside High School, Lollar went to work full time for Exxon Corp. During those years, he also attended the University of Alabama as a first-generation college student and earned his bachelor’s degree, master’s and Ph.D. in marketing. Lollar then accepted a full-time faculty position at the University of Georgia, where his work experience provided a focus for research, and most importantly, for experiential learning activities that prepared students for successful jobs and careers.

Through cultivating meaningful relationships along his journey, Lollar found people who “took an interest” in him,” he said, and that helped him grow as a person, transitioning from field worker for area farmers, to friendly mechanic at the gas station, to his role as professor at Radford who helped students find their way and purpose in life.

Kevin Bloomfield ’93 was a first-generation college student when he transferred to Radford University from community college. He met James Lollar early along his Highlander journey, and it sparked a change in his life.

“Of all my professors, or even teachers in high school, the way he [Lollar] taught and showed interest in my success was tremendous to me,” said Bloomfield, a serial entrepreneur who now is managing partner at Bloomfield Partners. “He really lit a fire under me. I’m lucky enough to have success in life, and he helped light that fire and make me see that it doesn’t matter if you get started behind the eight ball as long as you get started eventually. He really did make an impact on young me.”

Alicia Margoles considers herself one of the lucky ones who has known Lollar since the early days of his teaching career and benefited from his kindness and willingness to help students see their potential, as well as his eagerness to go to bat for them when it was time to graduate and build their careers.

Margoles was a student at the University of Georgia and was in Lollar’s last class there before he moved to Radford University. She was impressed then with his connections to the business world — he worked 10 years in various marketing positions at Exxon — and eagerness to bring executives to class so they could share their experiences.

“I remember a lady came into class wearing a dress shirt, a skirt, pantyhose and high heels and talking about her industry and her job and what she did,” Margoles said. “That was 30 years ago, and I still remember it because it had such an impact on me.”

Soon thereafter, Margoles was offered a job at Merck & Co. and has been with the company for almost 30 years. “Dr. Lollar was instrumental in helping me get in with Merck,” she said soon after visiting Radford to speak with students in two of Lollar’s classes. “He opened doors for me, and he has been opening doors for Radford students for many years.”

Through those years, Lollar has been a mentor and friend to students inside and outside the classroom and nurtured relationships long past graduation. “I’ve been to weddings and funerals, and I’ve seen many of their children over the years,” he said, reflecting on interactions he’s had with alumni.

He got close to teaching the son of an alumna. “That makes me feel old,” he said, laughing.

Recently, the former student texted Lollar — that happens often — with the message: “My son just committed to play baseball at Radford, so he’ll see you next year.”

Like all good things, Professor James Lollar’s teaching career is coming to an end. He recently announced he is leaving in December, at the end of the fall semester.

When Bloomfield got the word, he wanted to honor Lollar and continue his legacy of caring for the success and well-being of Radford University students. To do so, he is encouraging alumni to give to the Dr. James G. Lollar Scholarship, which will be awarded to a full-time rising junior majoring in marketing. The student will have a demonstrated financial need and a 3.0 or higher GPA.

“Through his countless hours of teaching and one-on-one sessions, I developed a better perspective on the broader professional world and started to understand my potential,” Bloomfield said. “I am confident that much of my success may not have been possible without the influence, instruction and personal guidance from James.”

Making a difference in students’ lives is the primary reason “many of us join this profession,” said Davis College of Business and Economics Dean Joy Bhadury, Ph.D., but it is rare, he noted, to “come across colleagues such as Dr. James Lollar, whose sincere dedication to students and their success both inside and outside the classroom has been this impactful over such a long time.

“In meeting alumni during my external visits, I often hear about Dr. Lollar and how fondly students remember not only his classroom instruction, but even more importantly, how he made a difference in their lives,” Bhadury continued. “Such a distinguished record as a teacher is commendable. Students and colleagues will miss Dr. Lollar after his retirement. However, I'm sure that his legacy will live on within the Davis College at Radford University.”

“It is truly an honor and deeply humbling,” Lollar said of the love and kindness he is receiving upon his retirement and of the scholarship that will honor his legacy. But he quickly diverts attention away from himself to speak more about the “wonderful students” he has taught through the years.

He told a story about a tradition he has for the last day of class of each spring semester. He tells seniors it is the saddest day of the year because, for many, it’s the last time he will ever see them. Then he makes them stand and hold their right hand in the air and take a vow, pledging “on my honor, I promise to stay in touch with Dr. Lollar.”

Many still do keep in touch because of Lollar’s extraordinary impact and because they see in him, just as he describes it, “the sheer joy of being able to walk alongside them for four years at a time when they are trying to find their own path to that next step in their life’s journey.”