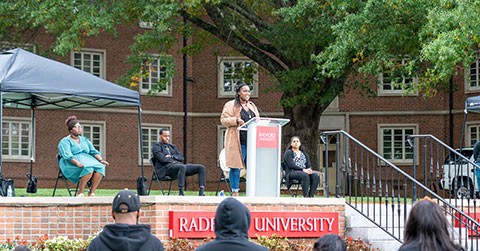 Students, faculty, alumni and scores of individuals from the Radford University community gathered on campus on Saturday, Oct. 16, 2021, for the second annual Bigger Picture March, an event organized to express messages of respect and unity but also discuss concerns and measures in which the university can improve support of Black students.

Junior Devante Mosley helped organize the event and was also a featured speaker. Along with fellow students and faculty allies, he began the event with speeches on the steps of McConnell Library on the chilly October afternoon.

“Learning to listen, learning to empathize and learning to understand the struggles of those different from yourself is a difficult life lesson,” Bodenhamer said, “but a powerful one for us all to achieve.”

Members of the Radford family, including Radford University interim President Carolyn Ringer Lepre, Ph.D., as well as faculty and staff, joined students in the march and rally to demonstrate their support for students. Following the opening speeches, organizers led a march from the library steps through campus past the Red Clocks to Moffett Lawn, with a unified goal of shedding light on social injustice and stopping racism.

Representatives from various divisions and departments across the university also marched in solidarity, many wearing yellow shirts to show their support and care for the student body as allies.

Following a beautiful singing performance by senior Breon Case, more students and allies took the Moffett stage as a spattering of raindrops fell.

Among them was junior Tatiana Tshibuyi, who spoke on behalf of Black women and urged the university to “hire Black and brown mental health professionals who understand the culture concept from which my mental health comes from,” and to “not just teach diversity and inclusion, but diversify your administration and your staff on all platforms and all places.”

Tshibuyi urged Black women present at the event to “lift your chin and walk with your head held high.

“Your voice has a purpose,” she continued.” Your life has a reason, and your voice absolutely matters.”

Alumna Alexis Beard ’20 spoke next, calling the event “history in the making.” Beard, who majored in psychology and sociology at Radford, later said, “Today we have managed to gather so many people to march yet again for not only equality and equity but to continue to emphasize the importance and value of our presence here as Black individuals.”

Assistant Professor of Health and Human Performance Tiesha Martin, Ph.D., took the stage as an ally to the students and encouraged the students to be change agents, which she said, required “knowing your power,” “having a focus” and courage.

“As change agents, we need to be very clear about what we are fighting for, and we need to make such strides toward and advocate those specific things,” she said. “I am looking out here, and I am so proud and I am so inspired by every one of you who is here to take a stand,” and later asked:

“Where does our energy go after this march is over? Again, I ask, what is the bigger picture?”

In closing the event, Mosley thanked everyone who attended in the wind and rain and then, as the sun made a brief appearance, asked for a minute of silence “for all of the lives lost to police brutality.”