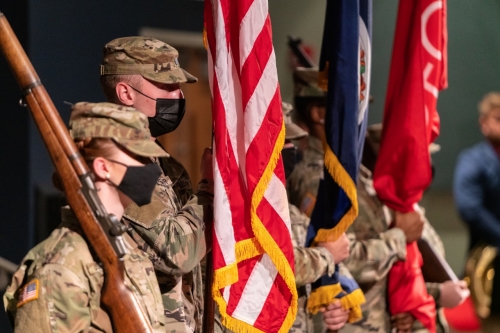 In paying recent tribute to the men and women who have served in the United States military, Radford University observed a custom even older than Veteran’s Day itself.

That timing mirrored the schedule of the armistice that in 1918 ended World War I and spawned the federal holiday that eventually became what we now know as Veteran’s Day.

Held at the Hurlburt Student Center Auditorium, “Saluting” opened with recognition of the many veterans present, including numerous members of Radford University’s faculty and staff as well as graduates and current students.

“Today, we recognize many who have come before us, to pave that way to freedom, and who have demonstrated the example of leadership, sacrifice, honor and duty to this great nation,” said Maj. Melissa Manigault, assistant professor of military science and chair of the Reserve Officers’ Training Corps.

“Veterans Day is a time to remember that our freedom is not guaranteed. It is protected by the men and the women of our armed forces,” Manigault told attendees. 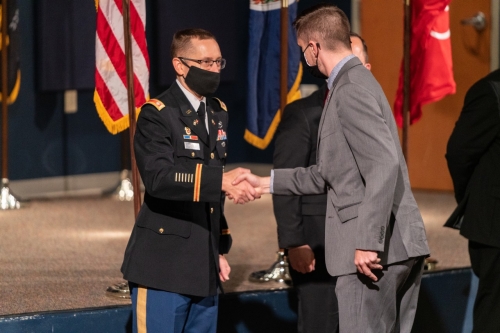 Radford University’s Chief of Police, Eric Plummer, Ph.D., is a U.S. Army veteran and was a faculty guest speaker, and he described how military service led to his extended career in law enforcement.

“For me, it all started with that first step forward in basic training. I still have the honor of serving my community and upholding the basic tenet of an organizational purpose and service,” Plummer explained.

“To those we are honoring here today, you too took that step into service of a cause greater than yourself … and I am grateful to be in the company of such people.”

Keynote speaker, Lt. Col. Greg Humble ’01, spoke at length about his academic career as a Highlander, his stint in the ROTC and his time in the army, which saw him deployed to Kuwait in early 2003 and participating in the invasion of Iraq.

It was a journey that led him through a palace abandoned by Saddam Hussein and across “the ruins of the ancient city of Babylon,” and those experiences left him with advice for those following a path similar to his.

“If at first some things seem hard, I would encourage you to keep with it. You may not recognize the progress that you’re making since it will be incremental. You will improve with hard work, effort and determination,” Humble said, adding a bottom line that underscores the group nature of military service: “This isn’t about being the best, but about being your best, and becoming a valued contributor to a team.” 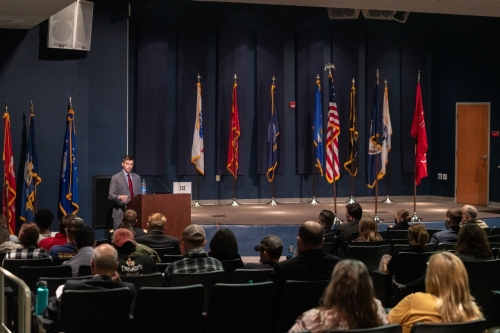 “Folks, the crisis does not go away after the war,” said Mark Shelton, a first-year graduate student, an army veteran and the president of the Student Veterans Organization at Radford University, which provides resources, support and advocacy for those who served.

“Those coming home feel confused, conflicted, distrustful and tired. Tired from their own battles and tired from the battles they fought.” Shelton said, calling for greater attention and care for veterans returning from service. “This isn’t just the newer generation, but every generation.”

Chris Nelson, a senior housekeeper on campus who served active duty in the U.S. Marine Corps from 1992 to 1997, was deployed to Somalia just days after the Battle of Mogadishu and the Black Hawk Down incident.

Going in, the then-19-year-old had to write and file his will as a precaution, and he stayed in Somalia for four months during Operations Restore Hope and Restore Hope 2. 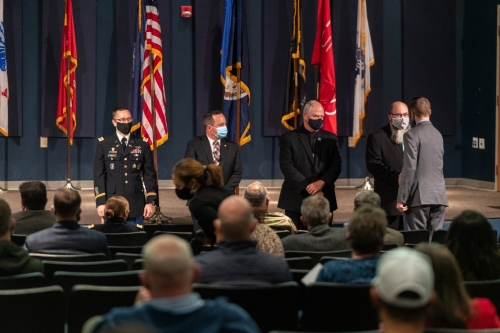 Nelson recalled that when he later started working at Radford University, the transition from military to civilian life was difficult until he discovered the Military Resource Center on campus, and he thanked the school for supporting it.

“Without the MRC, I don’t know where some of these kids would have a place to go and feel the comradery that they have today,” Nelson said.

Last year’s ceremony could not be held because of restrictions from the COVID-19 global health pandemic.