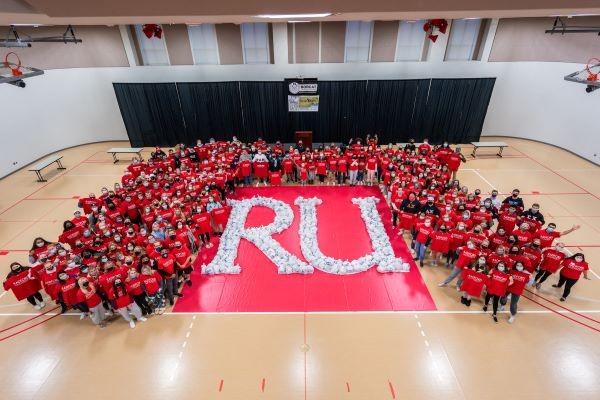 About 150 university students took part in Radford Gives Back late last month and brought 10,810 items of donated food into the Student Recreation and Wellness Center.

Two recent afternoons’ worth of effort will send a nourishing ripple effect out of the heart of Radford University and across the city that surrounds it, putting hundreds of meals into the hands and bellies of local school kids.

That was the result of the Radford Gives Back canned food drive, which recently marked its sixth year.

About 150 university students took part in the event and, together on Oct. 27 and 28, brought 10,810 items of donated food into the Student Recreation and Wellness Center.

During the event’s closing hour, Highlanders formed a reverse “bucket brigade” and divided the supplies up into 300 bags, each of which contained the elements of a meal – fruits and vegetables, a pasta entrée, soups, snacks, peanut butter and more.

One hundred and fifty of those bags went home to Radford Public School students this week, and the other 150 will be delivered next week, according to Jenny Riffe, M.S.W. ’03, whose program, Bobcat Backpacks, accepts and coordinates the donations year-round.

Riffe, along with Jane Fisher ’94, M.S. ’00, and Daniela Brunner ’98, founded the nonprofit organization in 2016; it has received mass donations through Radford Gives Back each year since.

“We were thrilled that this campus-wide initiative, which was started by the previous administration, was so whole-heartedly supported,” Riffe said. “It’s wonderful to know that the university’s commitment to serving the children of Radford will continue.” 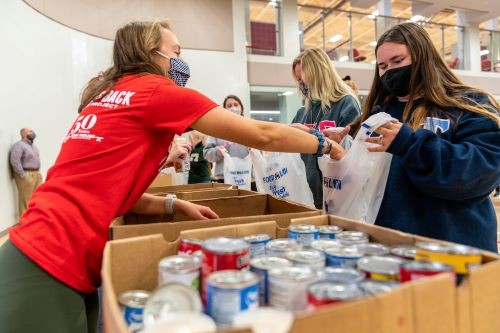 Student volunteers on Oct. 28 formed a reverse "bucket brigade" to quickly bag 300 individual meals, which will be distributed to Radford schoolchildren.

In her opening remarks at the gathering, Radford University interim President Carolyn R. Lepre, Ph.D., made her endorsement clear.

“Events like this illustrate who we are,” she told the crowd of students, volunteers and officials.

“Radford Gives Back inspires us to connect in a way that not only helps others but also gives each of us purpose and meaning,” Lepre said. “Continue to find meaningful ways to connect. Be that person who pays it forward, serve as a role model for others and be a part of something bigger than yourselves.”

Brunner, the Bobcat Backpacks co-founder, teaches fourth grade and said she’s able to see the impact of their effort first-hand.

“I have about 10 kids just in my class alone who get a bag every single Friday,” she told the volunteers. “I went to work today, and at the end of the day, a child came to me — and you can’t make this up — and he said, ‘I get my food bag tomorrow!’”

Brunner said the program feeds about 175 students each week and also operates during the summer. 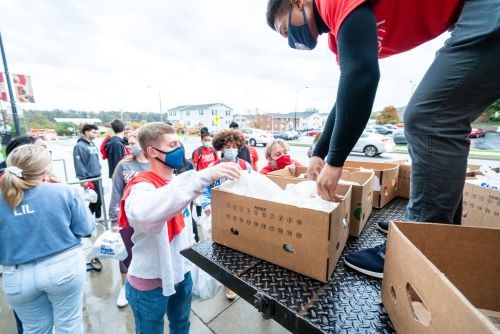 Surplus food donated to Bobcat Backpacks will be stored for future use. Students and volunteers helped load it onto a truck at the end of Radford Gives Back.

One of the factors that helps perpetuate the program is support from the Student Nursing Association and university offices and departments, as well as numerous sororities and fraternities, many of which collected canned goods or even purchased the food they brought.

“I think it’s really important that students are able to get the things they need in order to be ready and prepared for school,” said Sydney Braham, a senior communication major from Virginia Beach, Virginia, and a member of Phi Sigma Sigma.

“We actually do Bobcat Backpacks every Thursday. That’s something we do every week,” Braham said, adding that her sorority also helps with a school supply drive that benefits Belle Heth Elementary.

“We’ve been helping out every year since I was a freshman, and I’m just continuing that in my fraternity, for the younger guys,” said Brady Grow, vice-president of communications for Sigma Phi Epsilon. He’s a senior from Chesterfield, Virginia, studying internet technology security.

“We actually donated 250 cans this week; we just bought them with our own money,” Grow said.

Most fraternity and sorority members interviewed estimated they contributed between 200 and 300 cans.

Radford Athletics and club sports was also well-represented at the event, with its members volunteering throughout the day to count and pack items and load donations for hauling.

“This is my first year doing it. It’s a good cause, and I’m excited to finish it out,” said Lance Mills, a senior studying social work from Richmond, Virginia. He’s also part of the ultimate frisbee club.

“I think it’s just a good cause,” Mills said.

“Every year, we come out, and we just try and do as much as we can,” said William Dalrymple, a junior from Richmond, Virginia, who studies criminal justice. He’s the secretary for Radford’s men’s rugby team: “We come, we help out, we load up. We get to use our muscles.”

As he helped kick off the most recent ceremony, Radford Mayor David Horton, assistant to the dean of the Artis College of Science and Technology, acknowledged the “thousands and thousands of food items” that run through the program every year.

“This is a small but effective and important way to make a difference in the lives of the people of the city of Radford,” Horton said.

“Thank you for showing what Highlander spirit is.”