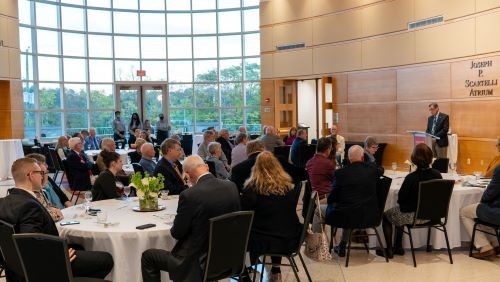 About 50 guests attended "A Celebration of Life," in honor of Johann Norstedt, Oct. 23, 2021, at the Joseph P. Scartelli Atrium in the Covington Center.

His gifts to Radford University were numerous and designed to perpetuate beauty, but they also chart a rich path toward the future.

Now students who never had the chance to meet Johann Norstedt, Ph.D., before his passing last fall, will benefit from his generosity through scholarships he established in the fields of art, dance, design, music and theatre.

A supporter of the College of Visual and Performing Arts for more than two decades, he created the first of those awards in 2009 – the Johann & Marilyn Norstedt Scholarship for Voice – then christened the five that followed after figures who inspired him, including concert pianist Rudolf Serkin, artist Jack Butler Yeats and contralto vocalist Marie Powers.

Despite such high-culture enthusiasms, however, Norstedt’s request for a posthumous memorial was decidedly simple: After he was gone, he declared, he hoped his family and friends would simply get together and have a party on his behalf.

On Oct. 23, 2021, five days shy of the first anniversary of his death, that wish was fulfilled with a gathering at the Joseph P. Scartelli Atrium in the Covington Center.

About 50 guests came together for “An Evening of Gratitude,” a celebration of Norstedt’s life, punctuated with live music, poetry, and remembrances by those who knew him. 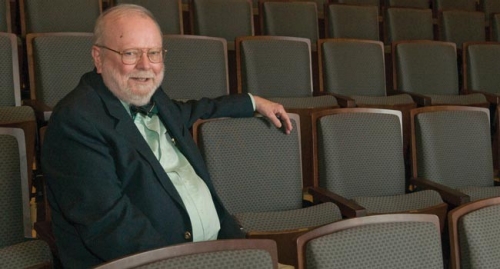 Wesley Young, a professor in the Department of Theatre and Cinema, recited two poems that night –Thomas McDonough’s “At the End,” the composition that was the focus of Norstedt’s Ph.D. dissertation, and also his favorite work of poetry, William Butler Yeats’ “The Fiddler of Dooney.”

“It was a tribute to his memory and legacy,” Young said of the gathering, adding that its planner, Kathleen Harvey Harshberger ’80, “crafted it so it would be joyous because that’s what Johann wanted.”

Harshberger recalled: “It was Johann’s intent to have a great party and, in fact, it was specified in his will.”

“All of the performers were people that Johann knew and loved and supported,” she said.

In his remarks at the top of the memorial, her husband, Dick Harshberger, cited their 40-year friendship with the man, and enumerated some of his many facets: “Johann Albert Norstedt was an academic; an author; an intellectual; a scholar; a dyed-in-the-wool Democrat; a gentle man; a cat lover; a bird lover; a lover of young people; a kind, generous, and genial man with a great sense of humor.”

“Johann Norstedt was a prince of a man,” Harshberger said.

Department chairs from the CVPA also recorded video tributes to their friend and colleague.

James Robey, who is also an associate professor in the Department of Dance, compared Norstedt’s nature to that of the late ballerina Margot Fonteyn, whom Norstedt revered and after whom he named one of his scholarships.

Fonteyn, Robey explained, “wasn’t flashy. She wasn’t prone to spectacle. But her quality and her expression were unmatched, and that made her a cultural icon.

“In an age where our students are bombarded with spectacle, where they are overloaded with rapid-fire technical wizardry, Ms. Fonteyn’s legacy – and now Johann’s – reminds our students that passion, experience and quality matters.” 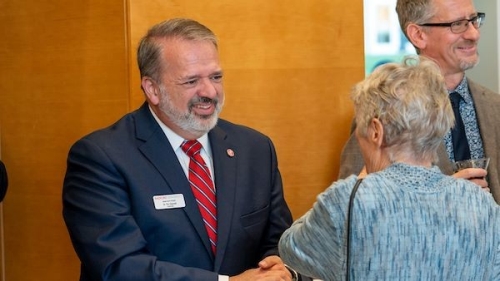 Department of Music chair Tim Channell, Ed.D., recalled Norstedt’s straw hat, “his signature bow-tie,” his encouragement toward students and his habit of crying out “Bravo!” at the close of particularly moving recitals and concerts.

“Through his generosity, we have two fully endowed scholarships in the Department of Music,” Channell said. “They will have a tremendous impact on our recruitment and retention abilities in our department and to maintain that level of high standards that he expected of his students.”

Although Norstedt’s long career saw him hold faculty positions at universities as far-flung as Beirut and Ireland, Pennsylvania and Virginia, he never taught at Radford, which came as a surprise to some who knew him as a fixture among Highlanders.

“I thought actually he was a Radford University retired faculty member because he loved the university so much and loved the arts and supported our programs in the arts,” said Holly Cline, Ph.D., chair of the Department of Interior Design and Fashion.

“He embodies everything that we would hope that people would love about our institution,” Cline said.