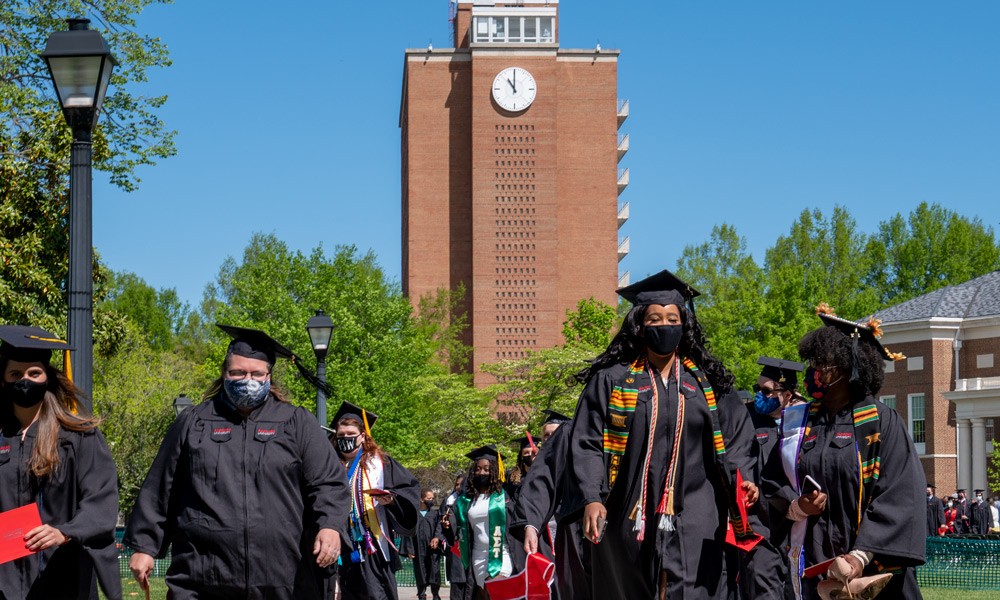 Seventeen separate commencement ceremonies were held from April 29 to May 2, 2021, on main campus in Radford, Virginia, and at the Berglund Center in Roanoke, Virginia, to celebrate the achievements of approximately 1,930 undergraduate and graduate students who attended in person.

The weather, windy, and the sky, deep blue, reflected the whirlwind of excitement graduates and their families experienced throughout the extravaganza. 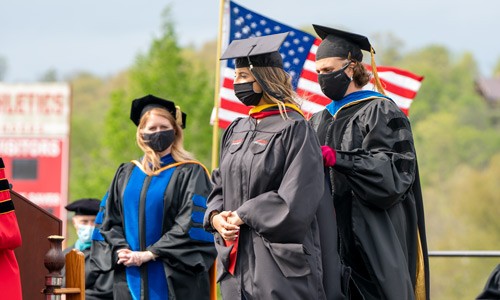 The festive activities began on Thursday evening at the Class of 2020 College of Graduate Studies and Research Hooding and Commencement Ceremony, held at Cupp Stadium. Graduates and their guests heard from keynote speaker Lyn Lepre, Ph.D., provost and vice president for academic affairs.

“This is a life-changing moment for all of our graduates. This is a day of justly deserved celebration. A day to also celebrate all those who have supported them along the journey to this stage,” Provost Lepre said. “I am amazed at the drive, dedication, motivation and inspiration of our students, especially those of you who have overcome obstacles and barriers in your educational journey and in your life’s path. Arguably, all of you have been faced with significant challenges as you worked to complete your degree during this global pandemic. This preparation and resilience will serve you well in your future careers and sustain you while you are serving others. Your Radford education has prepared you to use life’s setbacks as building blocks for future success. It has given you the skills to not only survive but to thrive.”

Cupp Stadium filled once again Friday night for the Class of 2021 College of Graduate Studies and Research Hooding and Commencement Ceremony. There, Anne O’Hara earned her master’s degree in social work.

“This is the icing on the cake,” O’Hara said. “I feel so content knowing that this is most likely the end of my academic career.”

In addition to earning her master’s degree, O’Hara, of Burke, Virginia, officially earned her undergraduate degree the next day at the Class of 2020 undergraduate ceremony for the Artis College of Science and Technology and Waldron College of Health and Human Services.

“I am excited to be an alumni legacy now,” O’Hara continued. “My brother is transferring here [Radford] this fall. I’m proud that he’s going to continue the Radford tradition.” 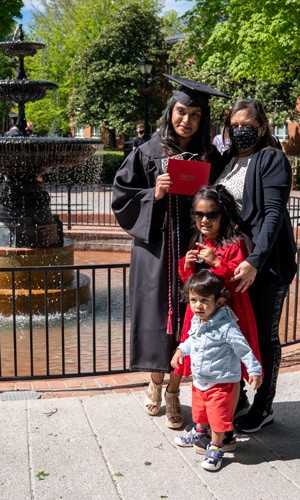 Graduates took photos with families at iconic locations around campus after each ceremony.

Hundreds of Highlanders returned to campus Saturday for their belated graduation, postponed a year due to the pandemic.

Some came for closure, and some to see friends and faculty they hadn’t seen in person for more than a year. Some, like Logan Richards, did it for their families.

“My parents and grandparents wanted to experience this once-in-a-lifetime moment with me,” said Richards, who earned his undergraduate degree in computer science.

This past year, Richards, of Roanoke, Virginia, has been interning at Web Jam LLC in Salem, Virginia. The Monday after commencement, he planned to participate in his first job interview.

For Eric Molly of Gloucester, Virginia, Commencement was “10 years in the making.”

Molly attended another university for three years, took three years off and then transferred to Radford. His parents, brother and girlfriend all joined him to celebrate the milestone.

“I couldn’t miss it,” said Molly, who earned a degree in music education.

Chanera Durante chose to participate in the delayed ceremony as an example to her 10-year-old son, Camden.

Durante and Camden, both dressed in graduate gowns, eagerly waited in line at the campus fountain with other Class of 2020 social work graduates.

Camden, close to her side, listened as his mother reflected on her inspiring journey.

The mother and son, originally from Fredericksburg, Virginia, have lived in Radford for the past seven years so Durante could work toward both her undergraduate and master’s degrees in social work. She also earned a minor degree in special education and a certificate in autism, an achievement especially important to Durante.

Camden, she said, is on the autism spectrum. Throughout her time at Radford, he would often join her in the classroom, where dedicated faculty would help Durante navigate Camden’s unique educational and social needs.

“It’s been a blessing the way that Radford has included Camden and helped us as a family,” Durante said. “He’s as much a Highlander as I am.”

Durante is also a first-generation student and said she wanted to make attending college a “new norm” for her family.

Alumna Nancy Artis ’73 served as the keynote speaker for both the Class of 2020 and Class of 2021 undergraduate ceremonies. Speaking at the Artis College of Science and Technology and Waldron College of Health and Human Services ceremonies held on McConnell Lawn, she offered graduates encouraging thoughts “on how to maintain your integrity as you travel beyond your horizon into the unknown.”

Among those thoughts were “to expect the unexpected.”

“I think we can all agree that the last 14 months have proven that statement to be true,” Artis said. “Yes, COVID-19 has caused you to adjust your reaction to the changing social interaction in a way you could have never expected. The impact on all the social interaction you had planned for the fall and spring just went poof! ... disappeared. And yet, you continued all the way to the end. Who knew Generation Z stood for Zoom? It is obvious that you are a Highlander, and you must always be responsive and resilient.”

“We are honored to recognize alumni who have excelled in their profession,” Lepre said. “It makes us very proud to acknowledge you as an alumna who has not only had a successful career but who spends every day fulfilling your passions.”

As the degrees were conferred, families cheered, and graduates, equally as proud, waved and smiled.

Maybe most proud of all was Durante and Camden, who walked the stage arm in arm to receive their very special and sentimental Radford University degree. 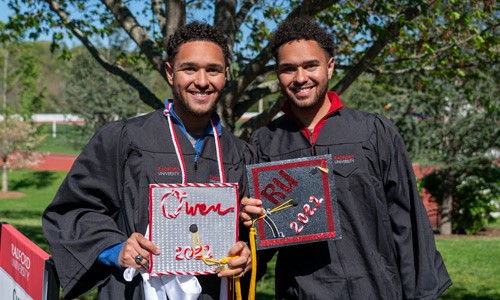 Brothers pose for a photo following their 2021 ceremony on main campus.

For more than a year, this group of resilient Highlanders has adapted to the unexpected challenges presented by the pandemic. Through it all, they persevered.

On Friday, they were finally able to conclude and celebrate a year filled with change.

“We’ve been waiting for this a long time,” said Cassie Wolfe, standing among a group of fellow communication sciences and disorders majors waiting for the Waldron College of Health and Human Services ceremony to begin. “It’s great to be able to have commencement in person. I think everybody's really excited for this opportunity.”

Wolfe came to Radford because of its speech-language pathology program.

“Radford was the only school I applied to,” said the Pasadena, Maryland, native who plans to attend graduate school at the University of Pittsburgh to study audiology. “I came here and fell in love with the campus,” she said. “It’s been my home for the past four years, and I love it here.”

During the ceremony, President Hemphill and Provost Lepre honored New River Health District Director Noelle Bissell, M.D. with the Presidential Medallion for Service “for her tireless efforts and sheer determination to make a difference in the lives of others, particularly during this past year when the world was devastated by the global health pandemic.”

“It was her dedication as a community leader that guided us through a time like no other,” Provost Lepre continued. “Her knowledge, skills and positive attitude are an inspiration to all of us.”

Across campus, the Davis College of Business and Economics ceremony was held on Moffett Lawn. Before the event, finance major Luis Segal spoke about the bittersweet moment of graduating and then moving on to start a job the following week in Richmond, Virginia, his hometown.

“My Radford experience has been great,” Segal said. “It’s had its challenges because of the pandemic, but everyone here has been super supportive. Radford has given me all the tools I need. I couldn’t ask for anything better.”

At Cupp Stadium, President Hemphill spoke during the College of Humanities and Behavioral Sciences ceremony, where his son, Jordan, earned a degree in communication.

“As your president and a lifelong educator, commencement is the most rewarding time for me, personally,” President Hemphill said. “It is the time when the hard work and pride are evident on the faces of our graduates and their families. As each of you contemplate the unique journey ahead of you, think not only about the vital role you play in your society, but most importantly, in the communities you call home. Throughout your personal and professional lives, you will meet a diverse cross-section of humanity, and I am confident that they will find in you what they find in so many Highlanders: a dedicated pursuit to lifelong learning, an unwavering champion of social justice, an unparalleled drive for discovery and an immense passion for the betterment of this society.” 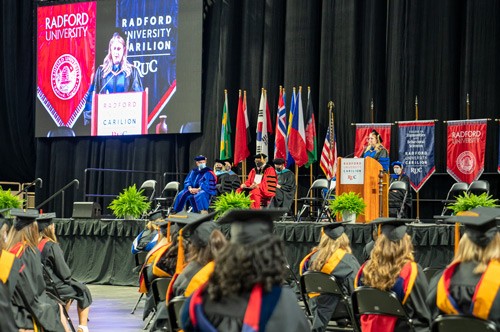 RUC commencement ceremonies honoring graduates were held at the Berglund Center in Roanoke.

While waiting for her ceremony to begin, Alexandria Pilot, a Doctor of Health Sciences graduate from Roanoke, Virginia, reflected on what made the day so special.

“We all get to be together and celebrate,” Pilot said. “We didn’t think we’d be able to do that with COVID. Today is super special, and I’m thrilled that my family is able to be here with me.”

Nearby, Gabrielle Spainhour, a South Hill, Virginia, native accepting her Bachelor of Science in Health Sciences degree at the ceremony, spoke about how RUC gave her room to grow and improve her career.

“I graduated a couple of years ago from RUC’s physical therapist assistant program,” Spainhour said. “I’ve been working full-time and have a daughter. Earning this degree is a big advancement for me and will help me build on my existing career.”

Spainhour added that it was comforting to see some of the students she went to class with.

“It’s nice to see the familiar faces I haven’t seen in a long time,” she said.

Artis delivered the keynote address, after which President Hemphill conferred the degrees.

The ceremonies ended with a recession from the arena, where RUC faculty lined up in a gauntlet, congratulating the new graduates — now proud RUC alumni — as they passed.

Watch a recap of our Commencement Ceremonies