Ivonne Valdovinos: making a difference in patients’ lives from the lab 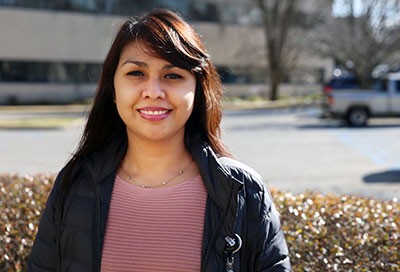 Ivonne Valdovinos’ 2,442-mile journey from East Los Angeles, California, to Roanoke, Virginia, began with a new hire at the laboratory where she was working as a lab technician.

“He had an MLS certification, which isn’t common in California,” Valdovinos said. “I tried to find out where he completed his program, but our schedules made it hard to connect. When we finally did, he said he studied at what was then the Jefferson College of Health Sciences. He said he really liked the program and how it had made an impact on his career. So, I began researching it for myself.”

Soon, she would be packing her bags and heading to the mountains of southwest Virginia to become a Medical Laboratory Science (MLS) student at Radford University Carilion (RUC).

Responsive
Valdovinos had not always been on track to become a medical laboratory scientist. At 15, she said she became very sick and was referred to Children’s Hospital of Los Angeles. During her time there, she said the nurses were very helpful, and her physician treated her as if she were part of his family.

“Being sick and feeling so vulnerable and not knowing when the better days would come was the most difficult of all,” Valdovinos recalled. “I remember seeing a little boy, about 4 years old, and the nurse called his name. You could see how his face changed when he saw her. I’ve seen kids cry and scream when they see a nurse or doctor, but he ran up to her and hugged her, and she hugged back. It was a very sweet moment.”

Valdovinos said whatever hardship the boy was going through at that moment was erased when he saw the nurse. She said that was when she realized that she wanted to do something in healthcare.

“I wanted to be able to make a difference like the nurse had made for that little boy,” Valdovinos said.

Resilient
Several years later, Valdovinos had recovered from her illness and was a pre-nursing major. She had completed two years of the program, but her educational path was about to take another turn.

As part of her nursing program, Valdovinos had to take a general microbiology course, which she took at a local community college near her home.

“It was a fast-paced class, five days a week, six hours a day,” she said. “That was the last class I needed before I could apply to the nursing program.”

Valdovinos said some of her classmates were disgusted with the bacteria, viruses and parasites they examined in the course, but she found it fascinating that something that is invisible to the naked eye could cause so much harm to a person.

“I enjoyed every second of the lecture and especially the laboratory part,” she said. Before long, and with the help of one of her professors, Valdovinos had changed majors to microbiology. She had to begin her coursework again, but she said she knew this was the right decision for her.

“Everyone was assigned a microscope, and every day we had different bacteria that we would have to identify,” Valdovinos said. “I considered my test tubes and cultures to be my little patients who I had to take care of. I would give them the proper food or media required for growth; the proper temperature setting because you don’t want them getting cold or too hot; and any other specific conditions that may have been required to obtain the best culture possible. In a hospital setting, these cultures would help diagnose an actual patient. I was definitely where I wanted to be and doing what I wanted to do.”

She began working as a lab technician around that time, and that was when she ran into the RUC MLS program graduate.

“Prior to my acceptance, I had done my research and learned that it was a National Accreditation Agency for Clinical Laboratory Sciences (NAACLS) accredited program,” Valdovinos said of the MLS program at RUC, which offers both a four-year baccalaureate degree in Medical Laboratory Science and a one-year post-baccalaureate certificate. Valdovinos is studying in the one-year certificate program. After successful completion of either, graduates are eligible for the American Society of Clinical Pathology certification exam.

Valdovinos continued, “Graduates from the MLS program are able to transfer their college credits to other states without any problem for the most part. All of that was important to me because I plan to return to Los Angeles and my family when I graduate in May 2021.”

Real
The move from California to Virginia was not a simple one for Valdovinos, even if it was going to be temporary. She is married, and her husband and family worried about such a drastic change.

“They were worried about me living on my own for a year on the opposite side of the country,” Valdovinos said. “To be honest, I was scared and worried too. I had never lived on my own, and I had never been away from my family for long periods of time. But, I have never wanted something as bad as I want this. I knew that if I didn’t try, I would end up regretting it my whole life.”

Now that she has been in Roanoke for awhile, Valdovinos said her decision to pursue her education at RUC has been the best decision she has ever made.

“I love my classes, my professors and my clinical rotations, and I love that my professors are always looking out for our best interests, helping us in any way they can. They are always available to answer any of our questions,” she said. “Plus, I talk to my family every day just to let them know that I am doing well despite the cold weather. The weather in Virginia has definitely been something I have had to get used to.”

Valdovinos said her favorite part of the MLS program at RUC has been the lectures that go hand-in-hand with what the students have learned during their clinical rotations with healthcare organizations.

“The preceptors who oversee our work in these real-world environments have been very helpful in passing down their knowledge from the years that they have worked in the lab, and they are good and letting the students have lots of hands-on experience,” Valdovinos said.

Once Valdovinos graduates in May, she said she can see herself working in a place like Carilion Roanoke Memorial Hospital, where she did her clinical rotation.

“I like the fast-paced setting,” she said. “I know that from behind the scenes, I can make a difference in someone’s life and health. Even though I took a longer path to my MLS certification, I know I’m headed in the right direction. This is my true calling and what I’m meant to be.”