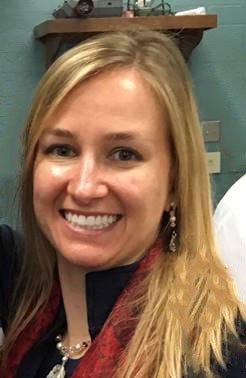 The intense, fast-paced practice of nursing is not unusual for Radford Doctor of Nursing Practice (D.N.P.) student Emily Richardson. As a matter of fact, she has been energized by fast-paced environments since she was a little girl in Lexington, Virginia.

Richardson and her four siblings lived a fun-filled, adventurous childhood. She remembers various accidents that resulted from the wild games she played with her brothers and sister.

One thing is for sure: She does not regret it one bit.

“I got interested in medicine from a very young age,” Richardson said. “When I was a kid, I was always the one getting hurt. Every time I would go to the family doctor or the hospital, the nurses would say, ‘Oh no, Emily! What happened now?!’”

The various hospital visits were Richardson’s earliest memories of the many interactions she had with medical personnel and doctors. After a break, Richardson ended up in the hospital again during her teenage years, where she discovered a passion for nursing that complemented her character.

But the circumstances were different; Richardson witnessed a difficult medical journey that hit close to home. When her best friend was diagnosed with bone cancer in her teens, Richardson experienced how nursing changes lives.

“When my best friend turned 16 at the hospital, the nurses threw her a surprise 16th birthday party,” Richardson said. She then recalled listening to her friend’s experience years later. It was as if in that moment of kindness from the nurses, the hardships her friend endured were no longer the focal point. As the nurses celebrated her friend’s new year of life, there was a light. And most importantly, there was hope. “This is one of the things that really solidified my decision to become a nurse,” Richardson said.

Richardson realized she wanted to spark the same light and hope in others as those nurses did for her best friend that day. And that is exactly what she did.

Richardson has been a nurse for eight years. After her undergraduate studies, she began her career as an ortho-trauma nurse but always knew she wanted to go back to school to become a nurse practitioner. She also worked as a float nurse, working at four different hospitals rotating amongst five different specialties: medical-surgical, progressive care, intensive care, emergency medicine, and nursing supervision. Richardson found her career advancement was reflective of her time as a student. She never let go of a willingness and desire to learn.

“A lot of my professional world worked out by just being willing to do it. My manager would ask if someone would be willing to train in another specialty at a sister hospital, and I’d volunteer,” Richardson said. “I’ve gotten really good at asking for help and asking questions to help me navigate new environments.”

This can-do attitude is exactly what allowed Richardson to become a successful doctorate student at Radford University. Despite the challenges of being a mother of two, Richardson maintained a pathway to success with the support of her faculty members along the way. One anecdote that speaks to their support was when Richardson was balancing having a newborn with her academic demands.

“My professors would hold my daughter while I was doing classwork and practicing skills,” Richardson said. “Having their support during such an intense program and motherhood shows they really try to be there for you in any way possible.”

The extent of support from the faculty extends beyond the classroom into other critical areas of education, as evident by her numerous letters of recommendation and scholarship letters. Richardson praises their commitment to support and always making themselves available. “They’ve always been so accessible and just a phone call away.”

Richardson also praises the nursing program’s focus on students. As a B.S.N. to D.N.P. student representative for the nursing graduate school curriculum committee, she and her colleagues have had the opportunity to influence the nursing curriculum and structure based on student feedback. Throughout her time on the committee, Richardson noted how attentive faculty were to feedback and attempted to implement changes to best suit student needs. The student-focused foundation of the nursing program is one of its many strengths.

The transformative educational experiences Richardson has received at Radford University have provided her many scholarship opportunities, and one recent award in particular is highly prestigious.

The Virginia Council of Nurse Practitioners Scholarship in the Blue Ridge Region is dedicated to the education, networking and advancement of nurse practitioners. Eligibility for the award requires a 3.5 GPA or higher, VCNP membership for six months and 15 doctorate program credit hours.

With Richardson’s 4.0 GPA, letters of recommendation, and 74 doctorate credit hours, she made the Radford community extremely proud as she was awarded the VCNP scholarship in January.

This scholarship is a demonstration of Richardson’s strength and commitment to succeed. She never let go of that light she once felt ignited in her best friend’s hospital room. Richardson is mastering her discipline to continue fostering pathways to health through nursing.

“Developing substantial relationships with my patients over the course of their lives is important,” said Richardson. “Providing them with the support they need to make both gradual and dramatic healthful changes will change their worlds for the better.”

And that is just what Richardson does through her commitment to education and her profession. She is changing the world for the better – igniting light and hope, one patient at a time.