Board of Visitors members hold first quarterly meeting of 2021 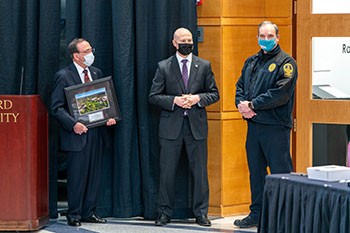 Radford University Police Department Chief David Underwood (far right) is recognized by the Board of Visitors.

The Radford University Board of Visitors convened on campus February 11-12, 2021, in the Covington Center for Visual and Performing Arts for its first quarterly meeting of the year.

During the February 12, 2021, meeting of the full Board, Rector Robert A. Archer commended Radford University leaders for a successful start to the spring semester, “especially from the perspective of COVID,” he said.

“We have come through quite a learning process to get us where we are today, and I think we are doing very well,” Rector Archer continued.

In his report to the Board, President Brian O. Hemphill, Ph.D., provided a number of updates regarding on-campus COVID-19 testing and vaccines. The University has been working closely with the Virginia Department of Health (VDH), specifically the New River Health District, to assess locations on campus for community testing and vaccine distribution. Potential sites include the Dedmon Center and the Student Recreation and Wellness Center.

Faculty and staff have been placed in Phase 1C by VDH with the opportunity to receive the COVID-19 vaccination on campus by the New River Health District at a later date. 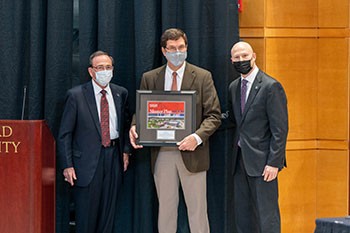 Director of Facilities Planning and Construction Michael Biscotte, PE, was also recognized by the Board. Both Biscotte and Chief Underwood are retiring from Radford University after years of dedicated service.

President Hemphill recognized several accolades the University has recently received, representing “the great work of our faculty, deans and provost,” he said.

The Best Colleges in Virginia 2021 featured Radford University as a top educational provider in the Commonwealth. The University was named among the “best for critical thinking skills” and ranked fifth in the state overall.

“This accolade is a clear example of Radford University’s incredible programs and its world-class faculty,” President Hemphill said.

President Hemphill shared that Highlanders look forward to participating in Advocacy Day in Richmond during the beginning of each spring semester. This long-standing tradition allows students and University leadership to share their Highlander pride with legislators. Due to COVID-19 concerns, the Radford family was unable to participate in-person this year. Instead, a video message was shared with members of the General Assembly on February 3, 2021.

President Hemphill concluded his report with an update on the newly renovated Williams Field at the Sherman Carter Memorial Stadium. Artificial turf was installed, which has greatly improved the facility and expanded opportunities for the University to host tournaments year-round. The project broke ground in November 2020 and was completed just in time for the Spring 2021 baseball season. It was funded 100% by an anonymous donor.

Board members recognized Radford University Police Department Chief David Underwood and Director of Facilities Planning and Construction Michael Biscotte, PE. Both individuals are retiring after years of dedicated service to the University.

Also, during the full Board meeting, members approved resolutions to:

Prior to the full Board meeting on Friday, members actively engaged in separate committees on Thursday to receive in-depth reports from campus administrators.

Committee Chair Gregory Burton began the meeting by introducing Auditor of Public Accounts Zachary Borgerding. Borgerding presented information regarding the ongoing audit of the University’s fiscal year 2020 financial statements. He discussed the responsibilities of the auditors, as well as the planned scope and timeline of the audit.

University Auditor Margaret McManus reported that 100% of University discretionary fund expenditures were reviewed, and all were found in compliance with the Board’s guidelines.

Vice President for Finance and Administration and Chief Financial Officer Chad A. Reed updated the committee on several of the University’s capital projects, including the Center for Adaptive Innovation and Creativity. A highlight of this presentation was new renderings of the building, which is projected to open in Fall 2024. Renderings included views of the building from East Main Street and the Bonnie Hurlburt Student Center. Inside renderings showed photos of the building’s impressive amenities, including a black box theater and dance studio. In alignment with Radford University’s commitment to sustainability, the building will meet LEED Gold certification standards, Vice President Reed reported. 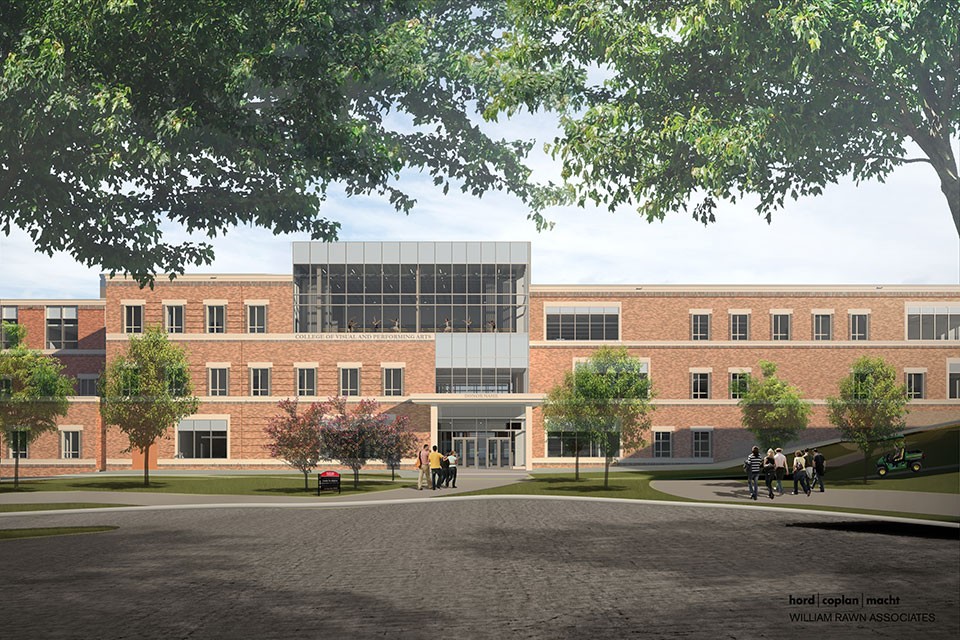 A rendering of the new Center for Adaptive Innovation and Creativity. This is a view of the building from Parking Lot A, near Martin Hall.

This committee, chaired by Thomas Brewster, M.S. ’95, Ed.D., first heard a brief report from Provost Lepre, who spoke about providing support for faculty teaching using a wide range of modalities. Provost Lepre said classrooms have been upgraded with improved audio/visual systems and classroom supports have been put in place, such as work-study student staffing and a proctored test center designed specifically to assist students who have been impacted by COVID-19.

Ismael Betancourt, assistant provost for the McGlothlin Center for Global Education and Engagement, provided a report to the committee about the center’s internal initiatives, which include growing Radford University’s international student enrollment. The goal includes potential collaborations with higher education institutions around the world, involving such disciplines as music therapy, ballet, cybersecurity and a Doctor of Business Administration collaboration with the Paris School of Business.

Betancourt said international admissions and recruitment now falls under the auspice of the McGlothlin Center of Global Education and Engagement. He spoke about the center’s recruitment approaches, which include virtual college fairs and events and building a strong network of recruitment agents. Betancourt also informed the committee of the center’s new comprehensive admissions website.

Faculty Senate President Katie Hilden, Ph.D., updated the committee on REAL, an innovative and student-centered curriculum that focuses on building credentials through academic experiences within majors, minors and certificates. The Faculty Senate, Hilden said, has passed 67 curriculum-related motions this year, which includes 10 minors and 51 motions related to REAL alignment.

Hilden said the REAL Council has approved more than 700 course proposals and 174 program proposals. “This avalanche of proposals demonstrates faculty’s commitment to making REAL a reality for students next year,” Hilden said. She spoke about the creation of new minors and how those fit into REAL’s knowledge areas: scientific and quantitative Reasoning, humanistic or artistic Expression, cultural and behavioral Analysis and applied Learning. The curriculum will also have more than 90 writing-intensive courses, which “will improve students’ ability to write professionally within the disciplines,” Hilden said.

The REAL Council is now marketing and recruiting students into their programs.

“Together, we are redesigning Radford University’s collective future and impacting the lives of upcoming Highlanders,” Hilden said.

The REAL curriculum will launch with the Fall 2021 semester.

Davis reported on the continued success of the daily symptom tracker challenge that encourages students to complete the important COVID-19 tool.

SGA continues to keep students engaged and involved through social media campaigns that support Highlander pride and unity. Davis said the student body has enjoyed SGA giveaways of T-shirts and other University keepsakes.

Plastic bags are being collected to install the second bench on campus as part of the SGA’s ongoing Bags to Benches recycling initiative.

The SGA is also working intentionally to foster a close relationship with students at Radford University Carilion (RUC). A meet-and-greet style event is being planned for this semester that will adhere to COVID safety guidelines.

Davis reported that this year’s virtual Martin Luther King Jr. Day of Service was a success, and students enjoyed donating canned food and other items of need to organizations across the New River Valley.

This semester, members look forward to rethinking, planning and organizing Unity Fest and other events that energize and celebrate the Radford family.

Associate Vice President for Student Affairs and Dean of Students Angie Mitchell, along with Cora Taylor, assistant director of Substance Abuse and Violence Education Support (SAVES), engaged the committee in an informative conversation about being a “trauma-informed campus community.” In this presentation, they explained adverse childhood experiences (ACE), such as emotional and physical abuse, and how this trauma can impact students and staff at Radford.

Training is currently being offered to staff on this topic in an effort to better support the health and well-being of the Radford family.

Chaired by Lisa Throckmorton ’94, the committee heard from Vice President for Enrollment Management Craig Cornell on freshman admission trends. Admissions have increased 7.2% at the main campus and 231% at RUC, results Vice President Cornell attributed to a strong academic pool and technological enhancements. The quality of freshman students, as measured by GPA at the main campus, has remained about the same as last year, with an average GPA of 3.50. At RUC, the average GPA of freshman admissions has increased from 3.50 to 3.76. Measures of freshmen’s commitment to attend also rose, with the main campus increasing by 21.3% and RUC by 150%.

Alumni Relations is reinforcing connections among Highlanders near and far, according to Vice President Lowery. Popular virtual events have included a book club, Story Time with Santa and coffee chats, which began in January and currently have 32 meetings scheduled in 11 states.

On the advancement side, Vice President Lowery also pointed to successes in annual giving, with the Highlander10 and RAD48 challenges. Telephone outreach has yielded increases in total dollars and average gift amount. Total giving for the fiscal year-to-date has increased by nearly $3 million over this time last year.

She also noted plans to resume the senior gift solicitation this spring and the launch of the capital campaign in April.

Joyner presented information about PathwayU, an online career and education resource for Radford University students to match their interests and potential career paths. PathwayU launched at Radford in August 2020 and has been integrated in UNIV 100 courses. More than 1,400 first-year students have engaged with the tool, Joyner said.

Lineburg shared the latest updates on the Student-Athlete Advisory Committee and the Diversity, Equity and Inclusion Committee, which presents the Department of Athletics with an opportunity to examine its commitment to racial and social justice in athletics on campus. February’s training for the department, Lineburg said, will focus on social injustice and race relationships.

Lineburg spoke about the progress of the men’s and women’s basketball teams so far this season and mentioned pre-season rankings and recognitions for spring sports teams and student-athletes. The men’s team has been predicted to finish first this season in the Big South Conference and softball second. Sydney Fisher is the Big South’s Preseason Softball Player of the Year.

Lineburg informed the committee of recent athletics fundraising successes, including baseball’s second annual First Pitch dinner, RAD48 and the Women’s Sports Leadership Initiative. Important dates and initiatives coming up for the department, Lineburg said, include the men’s and women’s Big South basketball tournaments in early March, the Highlander Open Golf Tournament on April 23 and the Highlander Half Marathon and 5K presented by Carilion Clinic on May 8.