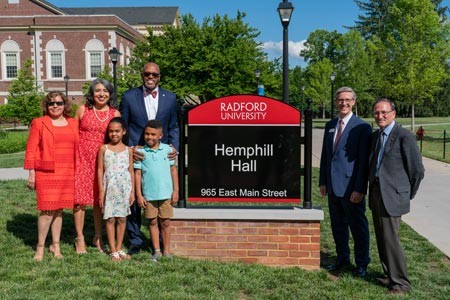 Members of the Radford family gathered in the atrium of the College of Humanities and Behavioral Science (CHBS) Building on June 15, 2021, to formally dedicate the building as Hemphill Hall, honoring the leadership and legacy of Radford University President Brian O. Hemphill, Ph.D.

Since it opened in 2016, “The College of Humanities and Behavioral Science Building has suffered from one thing, a proper name,” Dean Matthew J. Smith, Ph.D., said at the ceremony. “Today, Radford University completes this structure by christening it in honor of the University’s seventh president, Dr. Brian O. Hemphill.”

The naming of the CHBS Building in President Hemphill’s honor, Smith continued, “is something we are very proud of, for we claim him as one of our own. I am proud to affiliate our college’s ongoing mission with the legacy of President Hemphill.”

Just before the official unveiling of two plaques, Smith said, “Let me be the first, but by no means the last, to welcome you all to Hemphill Hall.”

President Hemphill announced in February that he is leaving Radford, after five years of leading the University, to become president at Old Dominion University.

In April, the Radford University Board of Visitors unanimously approved a resolution to honor President Hemphill’s contributions to the pursuit of teaching, research and service by naming the building in his honor.

And, in recognition of President Hemphill’s professional career and lasting legacy as a champion of student engagement and success, the Board announced the creation of the President Brian O. Hemphill, Ph.D., Student Scholarship Fund, which will provide life-changing opportunities for future generations of Highlanders.

President Hemphill joined Radford University on July 1, 2016, launching an impressive tenure of serving students and the region by setting forth a bold vision for the University’s future.

Among the significant accomplishments were the establishment of Radford University Carilion, which stemmed from a merger with Jefferson College of Health Sciences, as well as an annual investment of $10 million from the Commonwealth of Virginia to equalize tuition and fees; a $101 million investment to construct the Artis Center for Adaptive Innovation and Creativity, representing the largest investment and building in the institution’s history; the $34 million renovation of Reed and Curie Halls; the launch of the competency-based education program IMPACT; the creation and implementation of a bold and visionary five-year strategic plan and ten-year master plan; and the ideation and current construction of a boutique-style hotel near campus. The University broke ground on the hotel project hours before the Hemphill Hall dedication.

Radford University Board of Visitors Rector Robert A. Archer opened the building dedication ceremony speaking of the President’s legacy at Radford and his road ahead. 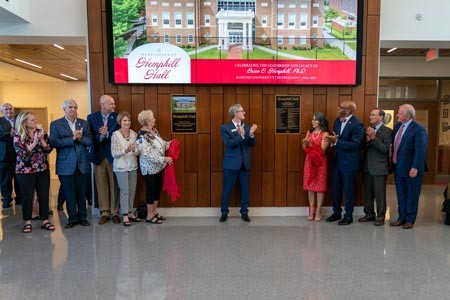 “This is a day many of us were not looking forward to, a celebration of the President’s leadership and legacy, while here at Radford University as he prepares to depart to a bigger — but, I say not better — opportunity,” Archer said to a chorus of laughter. “On behalf of the Board of Visitors, we all wish President Hemphill and his family the very, very best. We know how fortunate the Old Dominion University community is to have President Hemphill and his family.”

Archer thanked the President for his “truly outstanding leadership and especially his friendship. I, personally,” the rector said, “have never worked with a more dedicated and talented person under any circumstances.”

Speaking on behalf of the Board of Visitors, many of whom were in attendance, Archer also thanked First Lady Marisela Rosas Hemphill, Ph.D., “for her time and commitment” to Radford University. “She has devoted untold hours, and she will be missed.”

Archer was the first of many people from the campus and community to share fond memories of their years working with President Hemphill, many of which brought smiles and laughter. Occasional tears, too, fell like the drips from the Hemphill Hall ice sculpture chilling nearby.

Carter Turner, Ph.D., a professor of religious studies and associate director for University Advancement, spoke about the many ways the University faculty have strengthened under President Hemphill’s leadership.

“We didn’t get here by accident,” Turner said. “It takes a leader who does what he says he is going to do, that’s what we’ve had, and we’re really fortunate as a University. I hate to lose him, but we are a better University, and I am very grateful.”

Kristina Contreras ‘15, M.S. ’16, a graduate coordinator in the Office of the Registrar, spoke of her first encounter with President Hemphill. It came when she walked across the stage at Commencement as she was receiving her master’s degree.

“You looked at me,” she said to President Hemphill, “and said, ‘I am so proud of you.’ And, that stuck with me for five years, and I remember that moment very clearly.”

Chris Davis, who served as Student Government Association (SGA) president for the 2020-21 academic year, called President Hemphill a “tremendous leader and mentor” and recalled receiving a phone call from President Hemphill on the day of the SGA elections.

“I got a random call; I thought it was spam,” Davis said to laughter. He didn’t answer, but he received another call moments later. “Usually, a spam doesn’t call you back.”

Davis took the second call and learned it was President Hemphill calling to congratulate him on winning the election. “I was like, ‘Oh my gosh. The President’s first impression of me is I ignored him,” he said to more laughter.

Davis’ impression of President Hemphill, he said, was, “Wow, he really cares about me. He is a very caring and loving and genuine man.”

Michelle O’Connor ’91 said the first time she met President Hemphill, she was “struck by his energy and enthusiasm and was so impressed by his strategic vision for Radford University.” Executive Director of Alumni Relations Laura Turk ’87, M.S. ’90 and Radford University Alumni Association President Kevin Rogers ’87 presented gifts to the President and First Lady, including an official designation as honorary alumni.

“This decree is made on behalf of our 80,000 alumni as a testament of faithful support, in recognition of your proud loyalty and your abiding interest in our Alumni Association,” Turk said.

Sandra Davis, who along with her husband, Jack, has committed $8 million for scholarships in the Davis College of Business and Economics and the College of Visual and Performing Arts, said she has sat back “these past five years and marveled and loved” the work President Hemphill has done at the University. “Jack and I appreciate you so much, and you and your family will always be in our hearts,” she said.

Ray Smoot, a retired vice president for administration and treasurer at Virginia Tech and former chief executive officer of the Virginia Tech Foundation, said the words he has used to describe President Hemphill over the years have been “positive, hard-working, open, reassuring, bold and engaging. These are all attributes of a successful university president.”

Smoot said President Hemphill’s legacy “will have a continuing positive impact, not just for the University, but on the community.”

President Hemphill, taking the podium for the final time as Radford University president, spoke to the gathering, thanking everyone for their kind words, their friendship and professionalism and dedication to the University.

“Standing there and hearing all of these wonderful comments and statements made me start to reflect and think,” President Hemphill said, standing alongside the First Lady and their family. “There is so much about each of you in this room, the way in which each of you leaned in and were forward-focused in the advancement of this institution. I have a great appreciation for you.”