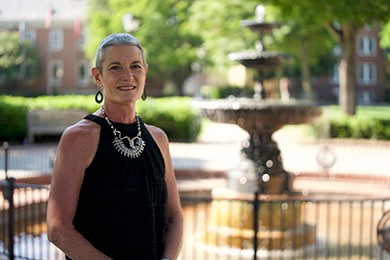 Radford University professor and director of Appalachian Studies and the Appalachian Regional & Rural Studies Center, Theresa Burriss, Ph.D., M.S. ’99, has been selected for a Fulbright grant award to Romania for the upcoming 2021-22 academic year.

Burriss was selected by the 12-member Fulbright Foreign Scholarship Board. She received the award as a reflection of her “leadership and contributions to society,” the Fulbright board said in the award notification letter to Burriss.

At Radford, Burriss teaches graduate multidisciplinary classes on Appalachia and place-based education and critical theories classes for the School of Teacher Education & Leadership’s education doctorate program. Additionally, she serves as director of Academic Outreach for the Southwest Virginia Higher Education Center in Abingdon.

The Fulbright U.S. Scholar Program sends approximately 800 American scholars and professionals each year to approximately 130 countries, where they lecture and/or conduct research in a wide variety of academic and professional fields. It is one of several United States cultural exchange programs that strive to improve intercultural relations, cultural diplomacy and intercultural competence among the people of the United States and other countries through the exchange of persons, knowledge, and skills.

From October 2021 to February 2022, Burriss will teach Appalachian literature to American Studies and English students at Transilvania University-Brasov. She plans to introduce students there to various literary theories to analyze selected poetry and prose that focus on coal mining in Central Appalachia.

In addition, Burriss will conduct ethnographic research in the coal-mining region of Romania’s Jiu Valley in the Carpathian Mountains, which, she says, will contribute to her cross-cultural coal scholarship. Additionally, this research will enhance her abilities to teach both American and Romanian students about the historical and contemporary similarities and differences between the Central Appalachians and the Carpathians.

“I specifically chose a coal focus with the literature I’m teaching because the research part of my Fulbright will be devoted to interviewing and observing residents from the Jiu Valley,” said Burriss, a trained qualitative researcher dedicated to effective and ethical oral history collecting. “Therefore, my project will possess more cohesion and will enable me to seamlessly integrate my research into my teaching while at Transilvania University.”

Burriss is already familiar with the Romanian Carpathians, having previously visited and taught in the area. She served as co-chair of the 2019 Appalachian/Carpathian Mountain Conference, which convened that year in October. The goal for those participating in the conference was to explore the parallels between the two regions, which are located thousands of miles apart.

In 2015, Burriss and two fellow Radford University faculty members — professor emeritus of Geospatial Science Rick Roth, Ph.D., and professor of biology Christine Small, Ph.D. — presented at the Appalachian/Carpathian Mountain Conference, and Burriss taught at Transilvania University in Brasov in 2017. In November of 2018, she provided an invited guest lecture, “Social & Environmental Justice in Central Appalachia,” at the University of Bucharest” for American Studies Week.

While on her 2017 trip, Burriss visited the coal-mining region for the first time and was struck by the similarities it shares with the Appalachian mining region, particularly in Southwest Virginia, Southern West Virginia and Eastern Kentucky.

“During previous interactions with Transilvania students, I learned that most had never traveled to the Jiu Valley and knew little about coal-mining life,” Burriss said. “The novels and poetry collections I have selected reflect historical and contemporary perspectives of coal mining in Appalachia and provide insight into different lived experiences of coal miners and their families as they navigated labor battles, occupational illnesses and environmental degradation, to name only a few issues.”

Once the Fulbright experience is complete, Burriss plans to write articles for peer-reviewed journals to discuss themes from her interviews and observations in the Jiu Valley, comparing and contrasting them with Central Appalachian coal mining experiences. She also plans to collect enough material to pen a book-length project about the two regions.

In addition to written materials, Burriss plans to collaborate with scholars from around the world to create a world coal heritage trail, “where coal miners and their families across the globe are honored and celebrated for the great sacrifices they have made for both their own and other countries,” she said.

“Such a cultural endeavor becomes critical as more and more countries make the much-needed transition to renewable energy to reduce greenhouse gases,” Burriss continued. “Coal miners and their historical contributions, however, should not be forgotten. Their lives must live on in history, and they must be recognized for their stalwart bravery and important legacies.”