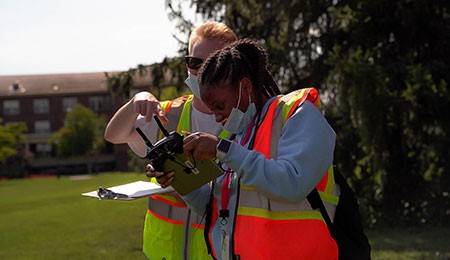 With a Phillips screwdriver in her right hand, Peyton Coleman dropped to the carpeted floor and quickly began lefty-loosening the multiple screws holding together a black remote-control vehicle.

“We’re taking it apart to put sensors on it,” explained Coleman as she twisted the screwdriver, “and then we’ll put it back together.”

The rising high school senior from Amelia County, Virginia, tinkered with the vehicle early on a Tuesday afternoon while a small group of her peers looked on. Each eagerly awaited her opportunity to work on the vehicle that soon would serve as a facsimile planetary surface exploration rover.

As the group collaborated, Sandra Liss, Ph.D., assistant professor of physics, walked by, listened to the discussion and periodically chimed in with helpful guidance.

Coleman and her group were among the 20 young women who participated in Radford University’s annual Summer Bridge: Women in STEM program, a week-long residential camp for female high school students. The program offers hands-on learning experiences — like building surface rovers and launching rockets — and provides a window into the world of science, technology, engineering and mathematics (STEM) education and careers.

This year’s Summer Bridge theme was “Mission to Mars,” meaning the students participated in activities related to power generation and transmission; remote and autonomous vehicles and rocket propulsion; the geology of Earth and other planets; and the biology and chemistry of space travel.

Three Radford University students served as teaching assistants. They, along with faculty and staff, organized Summer Bridge with a week of creative activities and lessons that incorporated science into the daily curricula.

“I really like Radford, and I love the science building and the science teachers here,” said rising high school senior Linda Maingua of Roanoke, Virginia, who also noted that Radford University is now on her list of colleges to consider. “You can really connect with them. You can ask them a lot of questions, and they are on it — they know everything that you’re asking.”

The rover Coleman and the others created on Tuesday and Wednesday would roam a small portion of the Radford campus in search of data later in the week. The young women controlled the vehicle remotely from Liss’ office, three stories above the ground in the Radford University Artis College of Science and Technology Center of the Sciences.

Just down the hallway from the rover construction, four more groups of young women were getting assistance from Caitlynn Fischer ’21, a teaching assistant in the program, and physics Professor Rhett Herman, Ph.D. The young women gathered around tables in the lab, working with circuits and coding sensors that will be placed on the remote vehicle.

Morgan Coltrain’s group was building obstacle-avoidance sensors for the vehicle — like NASA’s Mars Rover utilizes — in case something was to get in its way as it roamed.

“So basically, if our rover was going to drive forward and there was a tree in the way, the rover would say, ‘Oh no, there's a tree there,’” the rising high school senior from Chesterfield, Virginia, enthusiastically explained. “Then, it would avoid it and say ‘OK, we're going to go in a different direction, not in the direction of the tree,’ because obviously we do not want our rover to hit things and damage itself.”

The young women had accomplished all this on just Day 2 of the Summer Bridge program. The day before, on Monday, they learned “a lot of rocket math,” Coltrain explained, before building their own miniature rockets and prepared to launch them into the Radford skies on Friday.

As the young women progressed through each project, Liss could see their confidence soaring to new heights, which is the purpose of Summer Bridge.

“In the early school grades, many girls start to say, ‘I am not a science person,’ and we know that is not true,” said Liss, who, as an astronomer and university physics faculty member, is a role model for young women considering STEM education and careers.

The importance of Summer Bridge, she said, “is to give these girls an opportunity to have fun and take ownership of things and feel like experts of their own kind of creations.”

Shree Ghosh is one of those young women. The rising senior from Falls Church, Virginia, fell in love with space exploration as a child while watching PBS NOVA documentaries with her father. She wants to pursue a career in aerospace or mechanical engineering and found Summer Bridge to be a perfect launching pad for her astronomical ambitions. 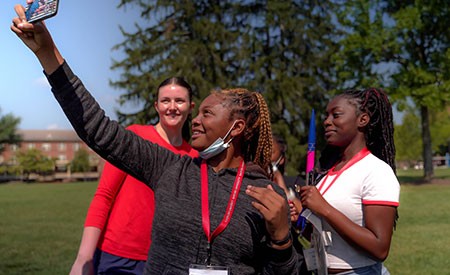 “I’m interested in space exploration and supernovas and black holes and just anything in astronomy, which is the main point of what we’re doing now, and that is why I came to Summer Bridge,” Ghosh said. “It’s really great that Radford has a STEM program just for women and also makes it available for free.”

Many of the sponsors participated in the program as guest speakers, including Amanda Cox, Appalachian Power external affairs manager, and Kim Janney and Anjali Dhabaria from TORC Robotics. A team from BAE Systems also presented, led by Kelly Moran, research and development manager. The participants also heard from Radford University alumna Laurie Shelby ’83, vice president of environmental, health, and safety at Tesla Inc.

Learning from these women and seeing the possibilities that lay ahead was an important piece of the Summer Bridge curriculum.

“Women in STEM are really underrepresented and just sitting in this room, there are so many ideas, and I really, really want these ideas to be open to the public, and I don't want us to be in the background anymore,” Coltrain said, sitting in the Center for the Sciences lab. “I want women to be able to explain these ideas and explore these ideas in the future and be acknowledged for our accomplishments.”

Coltrain felt at home during Summer Bridge. It was clear from the effervescent way she spoke about the program and by the fact this was the second consecutive year she had attended. In 2020, she participated in the three-day virtual session and “had to come back and do it in person,” she said.

Returning for a second year gave her a chance to learn the material more thoroughly, she explained, but it also gave her an opportunity and the confidence to be a mentor.

“I did this last year, and this year I’m telling myself ‘do this, grasp this,’ Coltrain explained, “and teach these kids how amazing this stuff is. This is a great opportunity for all these young women.”