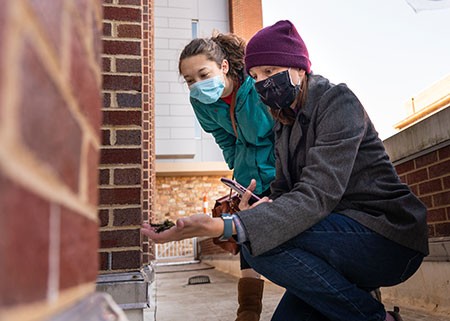 Biology professor Karen Powers, Ph.D., and dozens of her students have been busy researching an issue that is occurring on college campuses nationwide.

Every year, a billion birds are killed by window collisions, the No. 2 cause of bird deaths in the United States. Cats come in first, no surprise.

“That’s billion, with a B,” Powers said.

Because Radford University and most college campuses are populated with a number of large buildings decorated with dozens of reflective windows, the problem is even more pronounced.

In 2020, Powers and her student researchers reported 72 individual birds that had died due to a collision. More than 140 birds have been recorded since the project began. Some might not see that number as significant, but Powers asks that people consider the problem on a larger scale.

“It has been published a lot recently that bird populations are down, in some places as much as a 75% decline in the number of individuals,” she explained.

The research project began back in 2018, after a guest speaker of the student chapter of The Wildlife Society brought up the topic and explained the research efforts of a neighboring institution to address the problem.

“He was telling us all about the research and how easy it was, especially for students,” Powers said. “I thought it would be a neat project for our students to get involved in.”

That spring, Powers was willing to take on three to four research students “just to get our feet wet a little bit,” she said. Turns out, 18 signed up, and Powers couldn’t say no. So, she turned the research project into a one-credit class.

The team began by identifying 15 campus buildings that were representative of the variety of buildings on campus. The subset included tall buildings of varying heights, and they chose buildings surrounded by a lot of vegetation and also those with very little. Some buildings had lots of window area, and some had a lot less.

From there, they split the campus into east and west loops, and students would survey about seven to eight buildings a day, in a total of about 45 minutes.

“It’s something that they could complete in between classes,” Powers said. “It worked out really well that students could work around their own schedules.”

Some students measured the window area of each building or looked for the presence of bird feeders and other objects that would attract birds. Others looked at whether the birds were migratory or resident.

Over the years, the research has become more advanced as more students, approximately 40 so far, have been involved.

“I’ve been able to pull in folks who are more interested in genetics, so it’s not just ecology students that I’m picking up,” she said. “I’ve had three students now look at assessing the genetics of our birds. So, if we have parts or pieces of birds, like a wing or a tail, you can take a sample of them and run the DNA and get a species identification with nearly 100% confidence.”

Their dedication to the project has paid off as several students have co-authored research publications with Powers, an exciting opportunity and a highlight of the Radford University experience. 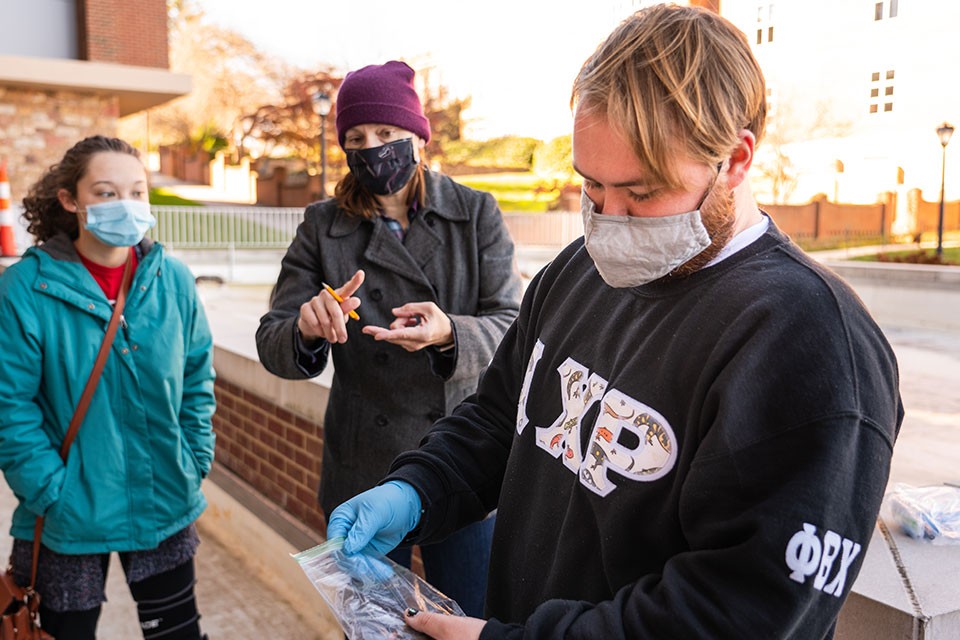 Similar to the diverse species of birds they have encountered during the research project, students Justin McLaughlin, Trey Harris and Thomas Marshall come from different backgrounds.

McLaughlin, a psychology and biology major, is a pre-med student. Harris, also a biology major, is interested in pursuing a career in wildlife rehabilitation. Marshall graduated from Radford over the Winter 2020 semester and is studying medical technology.

Despite their different personal and professional preferences, they share a special bond over birds.

“I’ve always been a big bird person. I even have two birds as pets back home,” McLaughlin said. “They are very meaningful and symbolic to me, and I think they’re such intelligent and beautiful creatures.”

McLaughlin’s role in the research is DNA barcoding. As Powers explained, oftentimes the researchers will find only a few feathers or a wing left of a bird. From those samples, if they still can’t identify the species, they can extract DNA and send it off for sequencing.

“What I hope comes out of research like this, specifically DNA barcoding and identifying these birds, is that we get a better understanding of biodiversity in this area and how that may be changing over time, because with climate change, there’s going to be a lot of changes in biodiversity.”

Harris is an animal and outdoor enthusiast. The project, he said, aligned perfectly with his interests.

A sophomore, Harris has been involved in the research since the summer of 2020. While navigating the east and west loops of campus identified by the team, he enjoyed the changing of the leaves last fall.

“I hope the research results in a solution, like the film we might be able to install on some campus buildings," Harris said. "It would mean a lot to me and others on my team to see our hard work pay off.”

Marshall said his major role with the research was bookkeeping, or “bird keeping,” he said. He would help organize the samples that came in for documentation and presentation. The research, he said, has grown his appreciation of the role birds play in our ecosystem. It has also helped him stay organized, focused and connected, especially during the COVID-19 global pandemic.

All three men agreed the research rallied them through the Fall 2020 semester, which was filled with challenges.

“It was nice to put in a pair of headphones and head outdoors, especially after days of being cooped up. We could go outside, get some fresh air, enjoy nature and conduct really important research at the same time,” McLaughlin said. 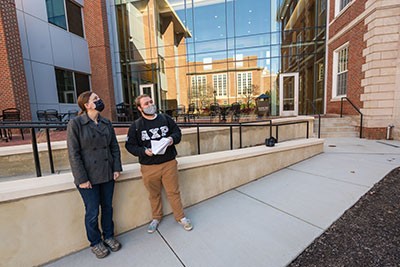 Powers and Harris inspect a location on campus with high bird collision traffic.

Now in its third year, the project has yielded significant findings.

According to Powers, the biggest takeaway from the project so far is that buildings with more window area were the sites of more collisions.

Collisions are also more common among migratory birds and juvenile birds – birds that are not familiar with the territory or are confused by their reflection in the windows.

With these data, the team is now advancing toward a solution. In February 2020, Powers and several students met with administrators in the Facilities Management Department and Artis College of Science and Technology Dean Orion Rogers, Ph.D., to discuss the possibility of installing film on the windows attributed to the most collisions. This would mask the birds’ reflections. Although the COVID-19 global pandemic hindered next steps, the group is hopeful for implications to soon be implemented.

Similar yet smaller-scale decals can be purchased in stores or online for your home or office windows.

“This is our first tangible output that I’m very excited about,” Power said. “If the film gets installed, we now have before data and after data, so we could see if it’s really having an impact.”