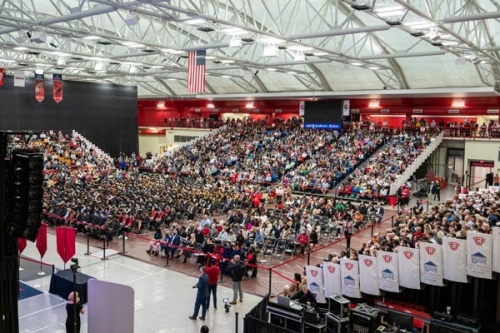 During Dec. 11’s ceremonies at the Dedmon Center, supporters looked on as degrees were conferred upon 461 undergraduates and graduates.

Between the 461 graduate and undergraduate degrees awarded on the main campus on Saturday, Dec. 11, and the 133 presented at Radford University Carilion events in Roanoke, some 594 Highlanders celebrated considerable milestones in their academic careers and lives.

Ranging in age from 20 to 60 years old, two-thirds of them are female. They arrived in the New River Valley from all regions of Virginia, as well as states and countries including New York, North Carolina, Ethiopia, El Salvador, Jamaica, Mexico and Peru.

All told, 193 of those students – about 32% of the total – are first-generation graduates. 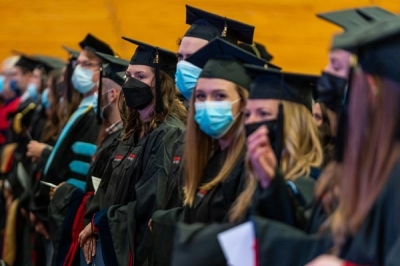 Radford University's 2021 graduates range in age from 20 to 60 years old, and about two-thirds of them are female. Some 193 of those students – about 32% of the total – are first-generation graduates.

Collectively, they represent the penultimate class of Highlanders to graduate before the school welcomes its eighth president, Bret S. Danilowicz, Ph.D., who assumes the role starting July 1. The Board of Visitors announced the selection of Danilowicz on Dec. 9, just as commencement activities were getting underway.

During the Saturday, Dec. 11 undergraduate ceremony at the Dedmon Center, hundreds of supporters looked on as degrees were conferred from the Artis College of Science and Technology, the College of Education and Human Development, the College of Humanities and Behavioral Sciences, the College of Visual and Performing Arts, the Davis College of Business and Economics, the School of Nursing and the Waldron College of Health and Human Services. 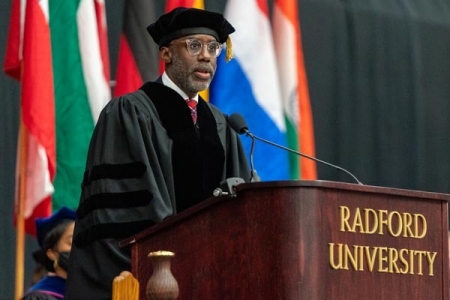 Robinson’s words encouraged the class to always be striving, to brace for adversity and to develop and rely upon such resources as family, friends and their alma mater.

"Remember there's more value in progress than perfection … forward movement is our goal," said Robinson, who earlier this year was elected to the board of trustees of the Solomon R. Guggenheim Foundation.

"Look, we've all invested in Radford, and in return, Radford's given us the tools, gave us the swag, and it's given us the confidence," he explained, pausing briefly to brush off his shoulders in a gesture of facetious vanity. 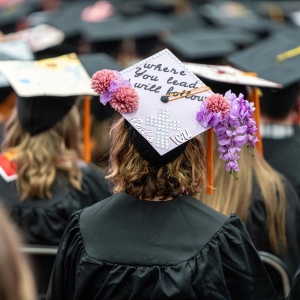 "As you embark on your journey, know there's going to be potholes, peaks, valleys, ups, downs, whatever. But put some soul into it. Put your soul into it.”

"I promise you today, if you rise and grind, a magic carpet ride awaits you. Greatness is upon you," Robinson declared.

Two members of Radford's Board of Visitors delivered remarks as well, including Rector Robert A. Archer and faculty representative Katie Hilden, Ph.D.

"This is one accomplishment that no one can ever take away, and I predict that the degree you have earned here at Radford will serve you well throughout the rest of your life," Archer said.

Hilden addressed the fact that the graduates' terms had been complicated by the emergence of COVID-19 nearly two years ago and acknowledged "it has not always been easy, as we learned to navigate Zoom, masks and plexiglass shields together. 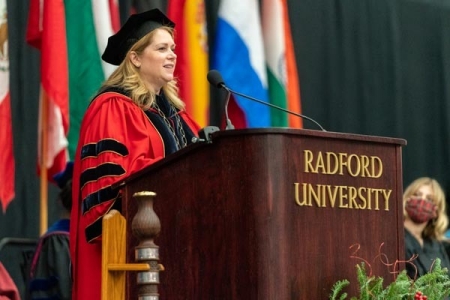 "We have appreciated your flexibility and adaptability during the pandemic. We know these two characteristics will serve you well in your future," Hilden told the crowd.

“This is a life-changing moment for all of our graduates and a day of justly deserved celebration,” she exclaimed.

“I am amazed by the drive, dedication, motivation and inspiration of our students, especially those of you who have overcome obstacles and barriers along your educational journey and your life’s path,” Lepre said.

“Graduates, I hope that today you can look back on your education and know the meaning of resilience.”

Streaming video of all of last week’s commencement ceremonies. 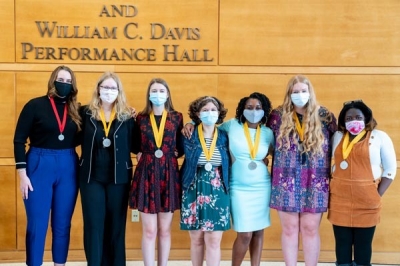 “You are a diverse group of amazing, wonderfully weird students,” Honors College Director Niels Christensen said affectionally to a chorus of laughter. He encouraged the group to keep in touch with faculty after they graduate and to “stay curious and always keep being your awesome, authentic self.”

The medallions signify graduates from Radford University’s Honors College. The Highlander Honors Scholar is the highest academic distinction bestowed on undergraduates at Radford University. These students complete a 27-credit honors curriculum, publicly present a scholarly capstone project and achieve a GPA of 3.5 or greater.

Radford University’s Army ROTC commissioned two officers in a ceremony held Friday, Dec. 10, in the Hurlburt Student Center auditorium. The officers have earned the rank of second lieutenant and are granted authority by the United States Army to carry out their duties as newly commissioned officers. 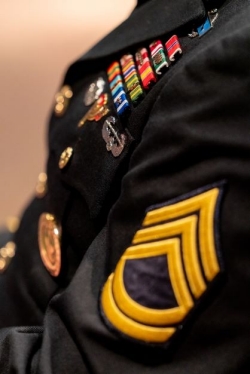 Those commissioned were Rex G. Diaz, a criminal justice major from Chesapeake, Virginia, and Patrick Henderson, a computer science and technology major from Leesburg, Virginia. Each officer individually took the oath of office before family members and friends pinned the rank on the officers’ shoulders.

Diaz’s grandfathers, Phil Diaz and Steve Johnson, conducted his pinning of the bars. Phil Diaz, who is retired from the U.S. Navy, gave his grandson his first salute. Diaz received the oath of office from 2nd Lt. William Floyd.

“To commission is actually the mission of the New River battalion, but our mission also notes that we commission leaders of character, and that certainly describes the two cadets that we have here today,” Col. James Cogbill said at the ceremony.

The Radford Army ROTC program was established in 1978 under a cross-enrollment agreement between the presidents of the university and Virginia Tech.

Earlier in the week, separate gatherings in both Radford and Roanoke recognized the achievements of graduates now well on their way toward careers as healthcare professionals.

On Thursday afternoon, hundreds of friends and relatives convened at the Roanoke Scottish Rite Auditorium on Campbell Avenue for the School of Nursing (RUC) pinning ceremony for 60 of its newest graduates — 19 traditional and 41 accelerated recipients of Bachelor of Science-Nursing (BSN) degrees.

The crowd tossed out cheers and applause as graduates each received their own Radford University School of Nursing pin, the emblem of a nurse’s formal education, and later the students, together, recited the traditional pledge. 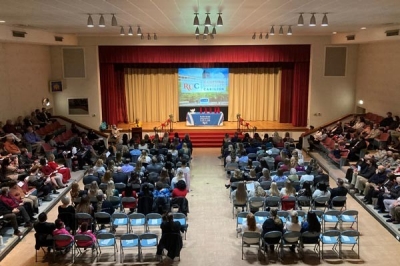 Nancy Agee, president and CEO of Carilion Clinic delivers remarks to graduates on Dec. 9, during the School of Nursing (RUC) pinning ceremony.

Keynote speaker Nancy Agee, president and CEO of Carilion Clinic, told them that while they might be focused on the moment – everything from anxiety about the future to doubts about the outfits they had settled on to wear that day – their accomplishments stood far taller than such concerns and should not be overlooked.

“What will matter, what will stay with you for all your days, is when you walk across that stage and you put that pin on. And you know all the work’s been worth it, and you are now crossing that threshold and joining the sisterhood and brotherhood of nurses across the globe," she said.

The following day, Friday, Dec. 10, 40 new graduates of the Radford University School of Nursing received their pins as well, in a main campus ceremony at the Bondurant Auditorium. 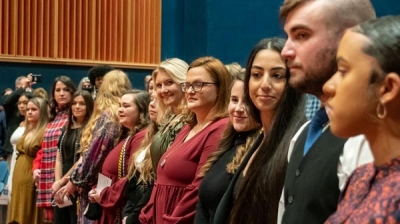 Some of the 40 new graduates of the Radford University School of Nursing received their pins in a main campus ceremony at the Bondurant Auditorium on Dec. 10.

The keynote speaker, retired Professor Ginger Burggraf, D.N.S., who received her own pin in 1964, reminisced about her long career and the many changes in the profession since the 1960s.

Burggraf urged the new nurses to exemplify a set of principles in their careers, “qualities that will never go out of your life and should always be part of your nursing care,” attributes she specified as gratitude, empathy, compassion, perseverance, commitment and humility.

After the speech, the graduates received their pins from the people School of Nursing Dean Johnnie Sue Wijewardane, Ph.D., called “your biggest fans and proudest supporters,” including grandparents, parents, spouses, siblings and children. They then recited the traditional pledge and closed their ceremony with homemade videos.

Also on Friday, equally large crowds of supporters gathered in the Grand Dogwood Ballroom of the Vinton War Memorial.

That latter event recognizes PA graduates with a presentation of a clinical lab coat, an emblem of their ascension to becoming healthcare professionals.

Reflecting on the white coat, Assistant Professor J. Randy Howell, D.H.S., said the garment "demonstrates that we are not only caring, compassionate folks that really care about humankind … we’re also scientists.”

Further, he issued a challenge to the graduates.

"You guys have had the opportunity to learn from many, many good people, from faculty members, from preceptors, from one another,” he acknowledged before adding another viable source of information and knowledge.

“Listen to your patients, they will be your greatest teachers."

Two of its members, McKenzie McNemar and Jillian Barnard, gave the student address, and each reflected on the challenges of both their work and the times at hand.

“Completing a graduate degree in the midst of a non-normative event such as a pandemic is not something to be taken lightly,” McNemar said.

“We have demonstrated a level of flexibility, versatility, creativity and humility that’s tested us as students, friends, partners, professionals and, overall, as humans. Life has continued on in the midst of an era of corona. We’ve experienced losses, triumphs, and everything in between,” she told the audience.

Barnard listed a variety of academic challenges the graduates had faced while they also lived lives ever moving into adulthood, which for some also meant jobs, marriage, and parenthood on top of their studies.

“We have become well-rounded students who will become adaptable and resilient practitioners as we embark on our next chapter.”

Since high school, Anith Muthalaly of Warrenton, Virginia, has strived to see the world through the eyes of Albert Einstein and Isaac Newton. That lofty aspiration was one reason he came to Radford University to major in physics and minor in mathematics.

Muthalaly is still deciding whether to enter the workforce or go to graduate school: “I want to do anything where I can use my degree and challenge myself to become a better scientist.”

Earning a graduate degree is difficult enough on its own, much less as a mother of two, as was the case for Amanda Whitney, who added a third child to her family during her academic journey.

Whitney began Radford’s Doctor of Nursing Practice (D.N.P.) program in 2016, going full-time for one year but part-time the rest of the way while doing clinical placements near home in Fairfax County.

“It was quite a feat to get through the program, but I did it, and I'm so excited today,” Whitney said, standing in line to march in the procession with her fellow graduates before the College of Graduate Studies and Research Hooding and Degree Conferral ceremony Saturday morning.

As she readies for what’s next career-wise, Whitney said her Radford education “has prepared me immensely well.” That’s a sentiment she has noticed when speaking with D.N.P. alumni as well. “Many of them have told me that Radford prepared them better than they ever realized.”