Radford University is a purpose-driven community with many talented and innovative administrators, educators, and scholars. Their unwavering commitment to our mission and student success continues to have a profound and lasting impact. Our success as an institution is intricately linked to the dedication and expertise of our employees. 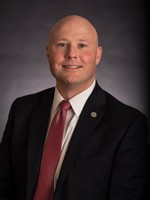 One such individual is Chad A. Reed who is currently serving as the Vice President for Finance and Administration and Chief Financial Officer. With a distinguished career in both the public and private sector, Chad has provided exceptional thought leadership, innovative thinking and strategic vision. As a servant leader, Chad has made significant contributions to Radford University and has left an indelible mark with each progressive role in which he has served. He was instrumental in the merger with Jefferson College and the launch of Radford University Carilion. From the initial planning of the Artis Center for Adaptive Innovation and Creativity, to the Highlander Hotel groundbreaking ceremony, Chad has had a positive impact on our university’s ambitious strategic initiatives. Most notably, Chad’s fiscal stewardship has helped to ensure the financial well-being of Radford University during his tenure and most recently as we navigated a global pandemic.

Chad recently has accepted the role of Vice President for Administration and Finance at Old Dominion University, following more than a decade of service to the Radford family. In learning of Chad’s new role, Wendy Lowery, vice president of advancement and university relations said, "Chad is a consummate professional who has a keen insight for the functionality of the entire institutional enterprise, he understands the importance of every facet of the campus community and believes in the mission of higher education. He is a colleague and a friend who I am certain will take ODU to new heights."

With the upcoming transition of Chad A. Reed, I am pleased to announce that Stephanie Jennelle has agreed to serve as the Interim Vice President for Finance and Administration beginning March 10, 2022. Stephanie joined Radford University in 2010 as the Associate Controller. Since 2016, she has served as the Associate Vice President for Finance and University Controller. Stephanie is a Certified Public Accountant and previous to her tenure at Radford University, Stephanie worked at the Auditor of Public Accounts (APA) within the higher education section. Stephanie is a graduate of Virginia Tech and has 18 years of service with the Commonwealth of Virginia. With her extensive experience and collaborative leadership style, I am confident that Stephanie will lead the division with excellence.

Please join me in wishing Chad well in his next role and congratulating Stephanie Jennelle on her new role as Interim Vice President for Finance and Administration. Happy Holidays and Go Highlanders!