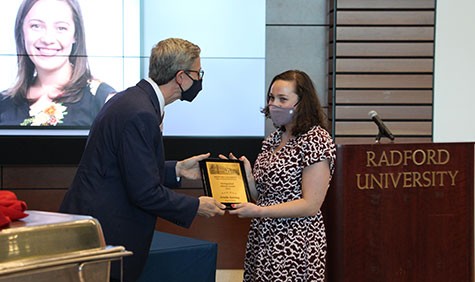 In the short time since she graduated from Radford University, Arielle Retting ’12 has built an impressive career in journalism as a writer and editor with such national media outlets as the Washington Post, Wired magazine and most recently NPR.

“Arielle is an extremely talented and sharp member of NPR’s editorial staff and someone I am proud to work with as a fellow Radford University graduate,” said Dave Mattingly ’86 in nominating Retting for the prestigious 2021 College of Humanities and Behavioral Sciences (CHBS) Outstanding Alumni Award.

The college presented the award to Retting Oct. 1, 2021, during a ceremony in Hemphill Hall. The award was crafted by the CHBS Advisory Board to recognize Highlanders who are making a lasting impact on the world. Mattingly, an NPR news anchor and winner of the 2019 CHBS Outstanding Alumni Award, introduced Retting at the ceremony.

At NPR, Retting serves as editor of visual newscasts, where her job is to incorporate photos and videos that will accompany the network’s top-of-the-hour radio newscasts. Her work, along with that of her colleagues, Mattingly said, has been recognized with two Webby Awards, which the International Academy of Digital Arts and Sciences present annually. In addition, Retting is part of the NPR team that has been nominated for a 2021 Edward R. Murrow Award.

Further responsibilities for Retting at NPR include writing and editing online broadcast content with a news producer, editing a daily newsletter and alerting smart-speaker users to breaking news.

“Arielle is really a master at putting together good journalism, good work, creative content for headlines and really making sure that NPR puts its best foot forward and we’re the best that we can be,” said NPR morning news anchor Korva Coleman. “I cannot imagine creating some of the content I do every day without her as a full and complete partner. She is integral to everything we do.”

Retting, who earned a Bachelor of Science degree in media studies – journalism, has actively pursued further training and professional development, most recently becoming certified as a project manager through Cornell University this year. She also has earned a Scrum master certification as a planner and project supervisor within an office.

Before going to work for NPR, Retting built the foundation of her journalism career with experiences at The Roanoke Times, the Oklahoman and the Virginian-Pilot. As a Radford student, Retting was one of 22 collegiate journalists selected worldwide to participate in a two-week fellowship on multimedia storytelling.

Altau was a journalism major at Radford who now serves as the managing director of the Joint Baltic American National Committee (JBANC), a lobbying group that promotes a close relationship between the United States and the three Baltic States: Latvia, Lithuania and Estonia.

Waldron was an English major who founded Loudoun ART magazine and chaired the Loudoun Arts Council. Her husband, daughter and family were present at the ceremony to receive the award in her honor.