Steve Abercrombie: bringing a world of experience to healthcare 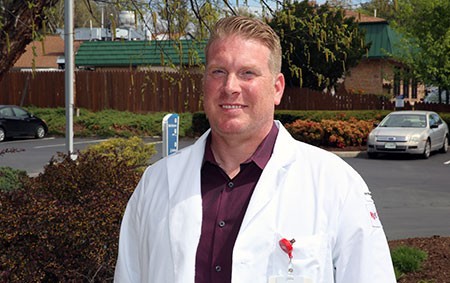 Before becoming a Highlander as part of the Radford University Carilion (RUC) physician assistant (PA) program, Steve Abercrombie had already experienced and explored more of the world than most of us do in a lifetime.

In 1996, the Oregon native joined the Army and spent eight years as a linguist, translating Spanish and Farsi while being stationed at Fort Bragg, North Carolina, in the 82nd Airborne Division. By 2007, Abercrombie decided his next challenge would be to take the special forces qualification course, graduating as a Green Beret. He was then stationed at Fort Campbell, Kentucky, in the 5th Special Forces Group and would spend nearly a decade in that role.

During his 20 years in the service, Abercrombie was deployed to Iraq, Africa and countless other regions around the world, meeting thousands of people, experiencing vastly different cultures and developing a skill set unique to him.

“Those experiences gave me the ability to adapt and be flexible,” Abercrombie recalled, “to work in different situations and at varying stress levels, as well as working with different personalities. It was invaluable to learn those skills for what I wanted to do next.”

Responsive
By the time Abercrombie retired from the military in 2016, he had already chosen his next challenge: he wanted to earn a college degree in biology and then go to PA school. How he ended up in the Roanoke Valley, though, could be traced back to 2012, when he met Kathy, a nurse who worked at Carilion Clinic.

“I was stationed in the Washington, D.C., area at that time,” Abercrombie  said, “and we spent a good amount of time commuting back and forth to see each other between deployments.”

To cut down on the time spent driving, the couple decided to relocate to Washington. When Abercrombie retired a few years later, they no longer had ties to the D.C. area and chose to return to Roanoke, where Kathy returned to work at Carilion as a nurse practitioner and Abercrombie began work on a bachelor of science degree at a local college. After completing that degree, Abercrombie set his sights on the RUC PA program.

“I chose RUC because of the relationship the school has with Carilion,” Abercrombie said. “It provides a great opportunity for various clinical experiences and settings.”

In addition to those outstanding clinical opportunities, the PA program at RUC provides students with the chance to interact and learn beside a broad range of healthcare providers so that graduates are prepared to collaborate across specialties from the start of their careers. In addition, the curriculum is rooted in evidence-based medicine, which provides a relevant experience for lifelong professional learning.

The 27-month professional program is comprised of 15 months of didactic — or classroom- and lab-based — instruction, followed by 12 months of supervised clinical practice at several program sites in a variety of specialties.

With only 42 students accepted into each class — chosen from approximately 900 applications received annually — the selection and interview process can be rigorous but ensures that the students in the program are the best of the best. Plus, that small class size has advantages.

“I liked the small class sizes that lead to a close-knit community, as well as the approachable and personable staff,” Abercrombie said. “It feels like family.”

Resilient
After eight years of dating, Kathy and Abercrombie got married in August 2020 and moved to Boones Mill, Virginia, just south of Roanoke.

It was a positive cap to what had been a challenging year not only for Abercrombie, but the entire world caught in the global COVID-19 pandemic. Abercrombie said that his preference is learning face to face, but he and his classmates had to transition to virtual classes for a while.

Last November, Abercrombie’s cohort finished their didactic year and were supposed to start clinical rotations. Due to COVID, however, the rotations became virtual.

It was a frustrating time for Abercrombie, but he had support at home that helped him through any tough times he experienced.

“Kathy earned her master’s as a nurse practitioner three years ago,” Abercrombie said. “So, she understands the stress and long hours of studying in a graduate program. She has given me lots of advice and support along the way as I learn and prepare for a new career in the medical field.”

Real
In January, Abercrombie and his classmates finally got to begin in-person clinical rotations. His first was in the emergency department in Giles County, followed by stints in family medicine clinics in the Troutville and Roanoke areas.

“The clinical rotations have been so much fun,” Abercrombie said. “They have made me realize I enjoy a job interacting on a personal level with patients. I feel I really got this during my family medicine rotation because it gave me the opportunity to work with the patients directly to solve their problems.”

Abercrombie hasn’t yet determined what specialty he will go into once he graduates in December 2021. He said that right now, he’s discovering his area of interest during his clinical rotation year. So far, he’s found interest in emergency medicine and orthopedics.

“We’ll see,” Abercrombie said. “Those are still my top two preferences, but I still have rotations to complete, so I'm keeping an open mind. It’s exciting to have so much to explore."