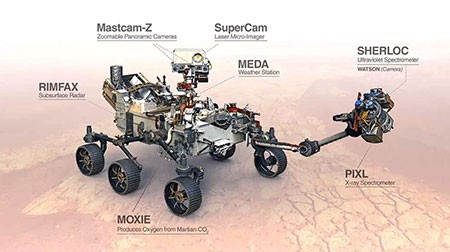 In the NASA and Radford University virtual classroom, participating teachers learned virtually from NASA engineers the science behind creating parachutes for the Mars Rover, information they can take back to their classrooms.

Engines roared and smoke billowed big, puffy clouds into the air. Seconds later, at more than 20 times the speed of sound, a rocket burst into the Florida sky, into the atmosphere, with its sights set on Mars.

The rocket is on a six-and-a-half-month journey to deliver the Perseverance rover to the Jezero Crater on the Red Planet.

The night before, in a NASA and Radford University virtual classroom, a group of middle- and high-school math teachers, who in this moment are students themselves, briefly discuss the mission while working on projects.

The launch was a thrilling sequence of events, possibilities and wonder for any science enthusiast. But, for these teachers, who are enrolled in a new Teacher Ambassador MODSIM (modeling and simulation) program offered by Radford University and NASA, it presents a universe of opportunities for the educators to later explain to their students the importance of mathematics and its real-life applications.

The perpetual question of “When will we ever use this?” can be answered in many ways, including with an inspirational response of “When you are searching for life on Mars.”

Like their students, math teachers have a plethora of questions. Their queries often relate to the most effective and efficient ways to incorporate STEM – science, technology, engineering and mathematics – lessons into their day-to-day curricula.

“Mathematics becomes relevant when students experience it situated within a meaningful real-world context that is of interest to them,” said Radford University Math Education Concentration Graduate Program Coordinator and Professor Darryl Corey, Ph.D.

“Students,” he said, “experience mathematics as more than routine procedures when it is mathematized into physical models and simulated so it can answer students’ ‘what if’ or ‘when to use’ questions.

That idea is a driving force behind the partnership Radford University’s online M.S. in Education – Mathematics Education graduate program developed more than eight years ago with NASA Langley Research Center in Hampton, Virginia. Together, the two entities formed a two-week immersive, professional development experience in the summer for mathematics educators.

Funded by a Math Science Partnership (MSP) grant from the Virginia Department of Education, the NASA Institute for High School Mathematics, as it was called, annually provided more than 20 secondary math teachers with the opportunity to visit and learn from education specialists and engineers at NASA Langley. Participating teachers toured various NASA facilities, attended presentations and collaborated with these esteemed industry experts.

At the core of the program, math teachers became pupils and immersed themselves in hands-on modeling and simulation learning experiences, essential components of engineering that are frequently neglected throughout secondary math instruction, Corey said.

“Participating teachers learned how to take real NASA engineering content and turn it into lesson plans they can teach in their classrooms,” Corey said.

Kenya Whitney, M.S. ‘19 has a hefty course load of teaching international baccalaureate math, geometry and Algebra II at Hampton High School in Hampton, Virginia. She enrolled and immersed herself in the 2019 MODSIM summer program and was astounded by all the program had to offer. “I never thought I’d be seeing and experiencing all these wonderful things they were teaching us,” she said.

In the era of COVID-19, on-campus professional development experiences have halted for the moment. New challenges, however, often ignite new opportunities.

Radford is again collaborating with NASA to launch the new yearlong Teacher Ambassador initiative that will train, via electronic means, secondary mathematics teachers in much the same manner it did in the two-week program at Langley.

“It’s an expansion of the previous NASA MODSIM program,” Corey said. In addition to incorporating science- and math-based lesson plans into their curricula, “it is preparing the mathematics educators to lead professional development workshops in their respective schools and school districts to pass along technology knowledge and skills needed to integrate MODSIM problems into their instruction.”

The new program began in July with 15 students, many of whom had participated in previous Radford/NASA MODSIM programs, and will run through the spring of 2021. Throughout the year, participants will virtually experience NASA Langley’s facilities, learn about missions and engage with scientists about integrating NASA context into the classroom content.

One example was a virtual session with an engineer who designed parachutes for the Mars rover, much like the ones that will be used for Perseverance.

“He provided the teachers insight about the Mars Science Laboratory Curiosity mission and how modeling and simulation were used to successfully land the rover on Mars,” Corey said. “He covered an end-to-end entry, descent and landing simulation and compared the results from the simulation against the real-world parachute performance.”

The lesson provided teachers “some interesting and fun examples of how simulation-based mathematics is actually used in the real world,” Corey continued,” and could potentially increase their students’ interest in STEM.”

In the spring of 2021, participating teachers will plan and lead at least one NASA STEM engagement opportunity and at least one professional development workshop in a school district.

A launching pad for sharing knowledge

When Whitney enrolled in Radford’s Master of Science in Education – Mathematics Education program, one of the top 35 programs of its kind in the United States, according to recent rankings by Intelligent.com, “it opened my mind that students’ experiences can come from me and what I know,” Whitney said. “So, if I learn more, I can give more.”

Like making “little rockets out of soda bottles out of small things they have around their house,” she said. “They just need for me to share that knowledge to know how to use those items.”

The idea of sharing and giving more, along with her previous experiences in the Radford/NASA MODSIM program, led Whitney to Teacher Ambassadors, a virtual rocket engine of professional development and a launching pad for engagement and dissemination of knowledge and information to school children and fellow educators.

“Everything I’ve learned, I’m taking it back to my school, and sharing it with my fellow teachers. You can’t withhold this information,” Whitney said with enormous enthusiasm. “With the things we’re learning, I think, ‘I have to share, this,’ and explore all the ways of ‘how do I share this?’

“When I enrolled in the Radford program, it opened my mind that students’ experiences can come from me and what I know. So, if I learn more, I can give more.”