Save paradise by painting a parking lot? 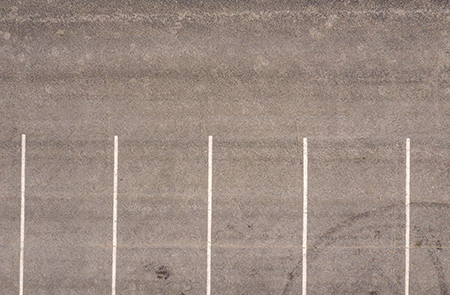 Could painting asphalt parking spaces white curb the warming of the Earth’s atmosphere?

A group of Radford University students is about to find out.

During the upcoming fall 2020 semester, Professor of Physics Rhett Herman, Ph.D., is leading students in his Thermodynamics and Statistical Mechanics (Physics 330) course through project-based learning.

In describing the project, Herman begins by talking about the Earth’s energy budget and how one factor in that budget is its albedo, which is the amount of incoming solar energy that is reflected back into space by Earth’s surface.

Asphalt’s albedo is about .05, which “means that only 5% of the incoming solar energy is reflected into space,” Herman explains. “The remaining 95% is turned into heat energy, which re-radiates into our atmosphere and contributes to Earth’s warming.”

“This is a major source of the ‘urban heat island’ effect,” Herman says, which is a mechanism by which cities are typically warmer — often much warmer — than the surrounding countryside.

That brings us to the potential importance of white paint on parking lots.

“The albedo of white paint is between 0.50 and 0.90, depending on the paint,” Herman says. “Thus, a parking space painted white — without a car on it — would reflect 50% to 90% of the incoming radiation, leading to less heating of our atmosphere.”

In developing the course, Herman asked himself numerous questions he thought students in this particular upper-level physics course could answer using the physics that they learn throughout the semester. Questions such as “What if our seas of asphalt parking lots — with hundreds of millions of parking spaces — were painted white? What might that imply for Earth’s energy budget? Could this simple thing make a difference? We have to have numbers to answer those questions. And getting those numbers is a process from which students can learn.”

For the course, students working in small teams will block off six co-linear parking spaces on campus in Lot E, which will be in full sun and not blocked by trees. They will paint the middle two spaces white, and place sensors in a line that covers both the white and neighboring unpainted black spaces.

The sensors will measure numerous factors, including surface temperature, the ambient temperature just above the surface and the albedo of each parking space.

The Radford University Department of Physics has a number of sensors that can be used for the project, including infrared surface temperature sensors, waterproof ambient temperature sensors and various light sensors to measure albedo. The data will be acquired using Arduino microcontrollers, or small microprocessors that can easily interface with these sensors and record the data they receive. Herman says he will encourage students to develop their own ideas for other sensors that might be used in the project.

Once the data have been collected, students will analyze their findings and, Herman says, “extrapolate this small area to a much larger one.” Their project will include a final presentation at the Artis College of Science and Technology Student Showcase in December.

Herman has led numerous project-based learning courses during his Radford teaching tenure, including his Arctic geophysics course with its biennial journeys to Utqiagvik, formerly known as Barrow, Alaska, to perform various geophysical explorations and measurements of the Arctic sea ice just offshore from there.

“The goals of project-based learning,” Herman says, “include giving students another way to succeed in this class besides traditional tests and homework, as well as giving them real-world applications and expertise that they may put on their evolving resumes.”