Esports is thriving at Radford, and beyond, thanks to Nick Sutton 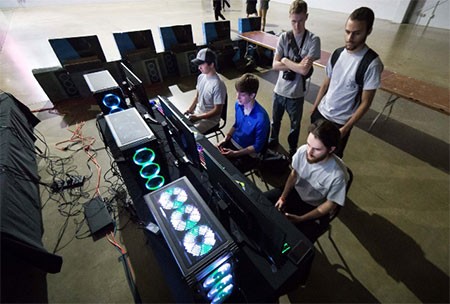 Esports is the next big thing – it's the new sliced bread, if you will – and Radford University graduate Nick Sutton ’19 is leading the charge to bring the increasingly popular video game competition platform to the inter-collegiate ranks.

Sutton, who graduated in December with a degree in Recreational, Parks and Tourism, has been hired as the new – and first – esports coordinator at Wayne State College in Wayne, Nebraska.

As coordinator, Sutton wants to build an “exciting an inclusive esports community” at Wayne State, he said, and work with academic departments and support staff to “excel in the areas of growth, recruitment and retention.”

Esports is an exhilarating, fast-growing, multiplayer video gaming competition with millions of players and fans across the world. Players can compete online against one another, either as individuals or teams, from the comforts of their homes or in esports-specific arenas. Picture giant headsets in front of multiple huge screens in large spaces that somewhat resemble a NASA control room.

At Wayne State, Sutton will lead student competitors in such games as Rocket League – think acrobatic soccer with cars –Madden football, FIFA soccer, Fortnite, Super Smash Bros. Ultimate and Overwatch. The teams he oversees at the college will compete in the Eastern College Athletic Conference.

Sutton said he would like to lead Wayne State to “become a top-tier esports program in the Midwest.”

Playing Rocket League a few years ago stoked Sutton’s interest in moving beyond his individual games and into team competitions.

“I was curious about taking my skills to the next level and started to do some digging into online communities where I could find a team and compete,” he said. “At this point in time, I was unfamiliar with collegiate esports, but I quickly came across multiple clubs and organizations who were hosting collegiate competitions.”

While enrolled in a Recreational, Parks and Tourism program planning course (RCPT 313), taught by Associate Professor Josh Carroll, Ph.D., Sutton developed an idea for an esports club at Radford University.

Soon thereafter, he penned a club constitution and held an interest meeting in 2017.

Growth was slow in the beginning. The club had only 16 members, but it was enough to establish two teams for online competitions. Word about the club spread across campus at Sonic speed and within a couple of years, the Radford University Esports Club was booming with more than 300 members.

“It is now the largest student-run organization on Radford University’s campus,” Sutton said. The club has numerous students who compete in many of the popular games, such as Rocket League, Overwatch, Super Smash Bros., and League of Legends, to name a few.

It turns out, creating the Radford Esports Club was only the beginning for Sutton. After the organization took off, he began working with faculty and administrators to build a varsity esports program with a long-term goal creating a partnership with collegiate esports leagues, such as the ECAC.

During his final semester, spring of 2020, Sutton worked in an internship with the Center for Innovative Teaching and Learning (CITL) that focused on “building a foundation for the University to successfully launch a full-scale esports program,” he said. His work included connecting with local businesses for possible sponsorship of future events and planning for a designated space on campus for those events.

On a personal level, Sutton competed in esports collegiate leagues for a little more than a year before he was contracted to play in semi-professional leagues. He currently is signed to play with the Tenacity Dragons Esports organization.

“I have been competing amongst the top 1% of players in the game, have placed in the top 150 teams in North America, and plan on playing in the Olympic qualifiers in 2021,” he said. “I still have room to improve, though, and do not plan on stopping anytime soon.”

From the beginning, Carroll knew there was no stopping Sutton from reaching his goals.

“I knew Nick had his head in the game,” Carroll said. “When he was in my class, I encouraged him to go for it, and I am so happy he did because he truly created his own destiny!”

Sutton certainly is going for it, not only for his own ambitions, but for students at his new job and those at his alma mater.

“Within the next few years I guarantee esports will take the spotlight as the next big thing,” Sutton said, “and I am looking forward to what Radford University does in the future with this new community on campus.”