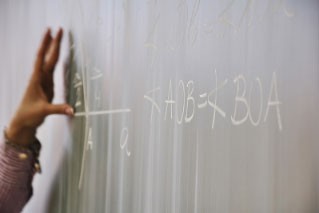 An article in a popular and respected mathematics research journal touted 25 ways in which statisticians could misinterpret the definition of p-values.

In the same paper, the seven eminent world statisticians who penned the article provided their own definition of p-value, which, at its basic core, is construed as mathematics evidence against a null hypothesis.

“Perhaps the authors could have added their definition as the 26th misconception,” joked Lovirc, a Radford University assistant professor of mathematics and editor of the prestigious “International Encyclopedia of Statistical Science,” where the article first appeared.

Lovric, a Yugoslavian-born career statistician and teacher with an astute sense of finding inaccuracies in statistics — it’s a passion —found the conceptual error and contacted one of the authors who, at first, kindly dismissed Lovric’s questioning, but soon thereafter was thankful the definition error was discovered.

The thank-you was followed by an “Ahhh, why didn’t you tell me about this sooner?” Lovric recalled, laughing in his Whitt Hall second floor office in the Department of Mathematics and Statistics.

The article was published in 2016 and has now been downloaded 213,000 times and cited by more than 1,100 authors of subsequent research papers. “Nobody found the huge mistake in the definition of the p-value,” Lovric reiterated.

Only Lovric did. And later, so did his Radford University students.

Lovric taught a summer II graduate course this year in applied statistics (Math 644). The class, held on Zoom, was made up of 14 middle- and high-school mathematics teachers who are pursuing professional development through Radford’s Master of Science in Education – Mathematics Education.

In the course, emphasis is placed on making sense of data and applying appropriate statistical methods to summarize and analyze data common to their field of research. Students explore p-values, among numerous other things, such as probability, BOX plots, Z scores, determining sample sizes, simple linear regression, making inferences about slope, non-parametric tests for correlation and population variances, to name a few. The list of topics covered in the short course seems infinite.

Near the end of the monthlong class, Lovric challenged his students with finding the research article’s p-value definition error, because it is “absolutely important they understand the p-value because of all these misconceptions and confusion and controversies,” he said.

Lovric broke the class up into teams — it is one of his favorite teaching techniques — to review and discuss the article. Then, teasing extra credit, Lovric gave his students 24 hours to find the error.

Twenty-four hours to find a flaw thousands of mathematicians and statisticians had overlooked.

One of those who mastered the challenge was Emily Mullins, a mathematics teacher at Scott Memorial Middle School in Wytheville, Virginia.

“The devil is in the details!” said Mullins, a first-year graduate student in the Master of Science in Education – Mathematics Education program.

“Professor Lovric provided us the paper and challenged us to find the mistake. It was exciting knowing that graduate students found a mistake in an article that has gone unnoticed by so many statisticians.”

The Master of Science in Education – Mathematics Education program excels, Lovric said, because of the knowledge and experience students bring to the classroom.

“We have terrific students in the program here at Radford University, and they have a great initial knowledge of mathematics,” Lovric said. “I am very proud of what they accomplished.”