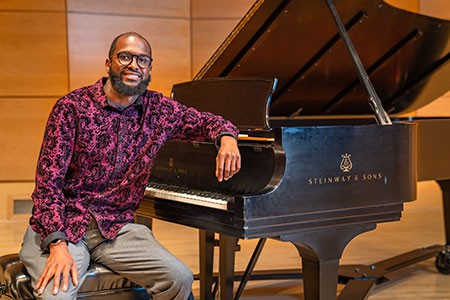 It took Terrance Shepherd 14 years to get his first keyboard. That began a musical journey that’s proceeded to this day.

He spent years pursuing first an associate degree in music, then a bachelor’s in music performance, then beginning his master’s studies in music composition, with countless hours at the piano to master its technical challenges and artistry.

But it took him less than 10 seconds to knock the socks off a musical legend over Instagram Live.

That is when he played two Alicia Keys songs at the request of Keys herself, who looked pleased and impressed as Shepherd flew through the intricate piano work. Not that he noticed at the time — he was pretty busy pouring out his passion and skill.

Shepherd’s journey with Keys’ music began when he acquired his first piano songbook at age 14 — for her “Songs in A Minor” album. But the initial spark for his interest in music came from another cultural touchstone.

“It was an episode of ‘Fresh Prince of Bel-Air,’ the pilot, where Uncle Phil took in his nephew at the end of the episode,” recalls Shepherd.

When Will played Beethoven’s “Für Elise,” something awoke inside Shepherd.

“I knew there was some kind of beauty in it, and a certain kind of depth to it,” he said.”

That was enough for the 14-year-old to transfer his passions and energy from hip-hop dancing to music. He got a keyboard for Christmas and soon became absorbed in mastering its intricacies. It was just the right outlet for a lonely kid with few friends or family members his age.

“It was someplace to put my energy and focus,” Shepherd said.

A drive to learn and teach

With the passion for music still burning through his teen years, he went on to earn a bachelor of arts in music performance from Queens University in Charlotte, North Carolina. His goal was to be involved in music education – to “pass down knowledge.”

But Shepherd, who calls his own composition style “contemporary,” is far from stuck in the past, he said. 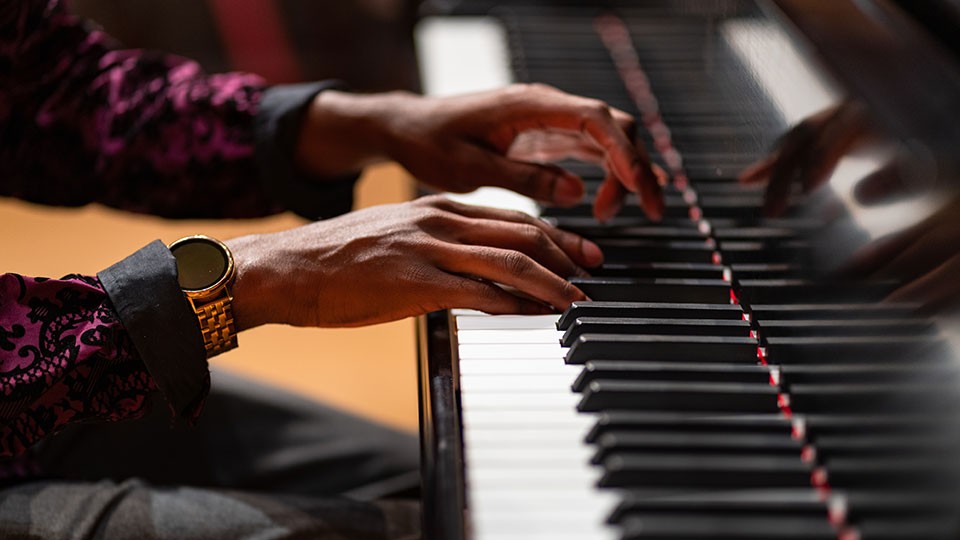 “I feel like there’s room for new genres of music to be talked about. I think it’s important that we give relevance to the kind of music that’s going on right now.”

To follow that goal and build on his knowledge of music composition, Shepherd started pursuing his master’s degree at a large university in Virginia. But in music and life, the feel is everything. For Shepherd, his new school was a little off-key.

“I decided it wasn’t the right fit for me,” he said. “The department there is great, but it’s a big university, and with everything that was going on, I felt I got lost in the sauce.”

Feeling a little burnt out, he took some time off, long enough to discover Radford University through his educational connections.

“I was interested in the professors here and the community,” he said. “Radford is more like my alma mater, Queens University. Queens is very community-based, and I felt like that about Radford.”

Anyway, who needs Northern Virginia when the whole world is listening to you on Instagram? Especially if one of your listeners is a pop and soul icon and fellow piano virtuoso.

A musical night to remember

It all started late one September night over Instagram Live. Keys was holding an event to launch her latest album, “Alicia,” which debuted at No. 1 on the Billboard Top R&B Albums chart. Shepherd found himself in a conversation with her, and they had plenty to talk about: their mutual musical influences, like Donny Hathaway, Roberta Flack, Nina Simone, Stevie Wonder — and how Shepherd, as a teenager, had set himself the project of learning to play every song from Keys’ first two albums, “Songs in A Minor” and “The Diary of Alicia Keys.”

“She said, ‘Hold on. Do you have a piano near you that you could play for me real quick?’” he recalled.

“This is definitely an honor!” he told her.

He launched into “Fallin’ and “Harlem’s Nocturne” as Keys and the Instagram audience cheered him on.

“This is so, so fire!” she said as he finished. “Thank you, Terrance, for blessing us with your gift … It was gorgeous. Keep shining, man.”

She made sure to get his Instagram user name (@t.shepmusic) so she and others could follow him.

“We are definitely going to collab soon,” he told her.

While it may have seemed like a sudden leap from master’s candidate to Instagram star, Shepherd was prepared.

“I’ve been waiting for this moment since I was 14 years old, when I picked up that first songbook, or the first time I ever played [Beethoven’s] “Moonlight Sonata,” which was also on her album. This was my shot!” he said.

After his spotlight moment and the flurry of attention on social media and local TV, it was back to the normal life of a graduate student for Shepherd: studying, writing, grading papers and squeezing in about five hours on the piano a week these days, between practice and composition.

Still, he’s been heard. And while he plans for a future in music education, future collaborations with a certain artist wouldn’t be unwelcome at all.

“She would have been on tour this year, before COVID-19, and I bought tickets back in January to go see her in Charlotte in August,” Shepherd said. “But unfortunately, it was postponed until next year. But I told her I got tickets, and she said ‘I’ll see you in North Carolina soon, and we’ll make it happen.’ She left it off kind of like that.”

Who knows what the future might bring? To paraphrase the words of a great woman: this guy is on fire.

Shepherd’s performance and chat with Alicia Keys can be seen on his YouTube channel: www.youtube.com/channel/UCvgYZSbOT9XiUFfPJoReirA.