Professor of marketing ‘exemplifies the notion of a teacher-scholar’ 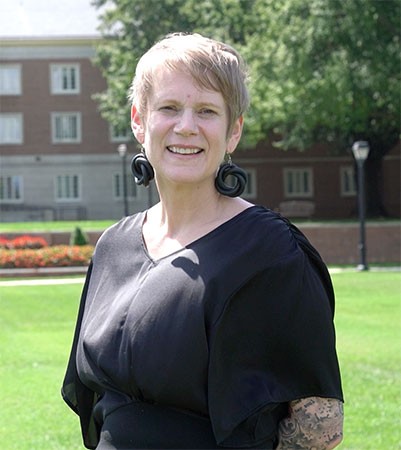 As she walked through the doors of the board room in Martin Hall, Jane Machin, Ph.D., was “initially super confused.”

Under the guise of a meeting with President Brian O. Hemphill, Ph.D., she anticipated a 1-1 meeting. However, as the board room doors opened she was startled, “because there were people in there other than the President, and I thought I was interrupting a meeting.”

Machin quickly realized, however, that she could breathe a sigh of relief.

The covert meeting was to celebrate Machin and recognize her extraordinary achievements by presenting to her the Donald N. Dedmon Distinguished Teaching Professor Award. The award, along with other faculty awards, was announced University-wide to faculty and staff at Fall Convocation, held virtually this year as the University continues safe and healthy practices in response to COVID-19.

“I was a little nervous, but it was a nice surprise,” Machin said after receiving the honor. “I didn’t even know what award I had won, to be honest, because I was so overwhelmed.”

Machin began teaching and making a positive impact at Radford University in August 2013. She came to the University after teaching at an R1 school “because I wanted to work at a school where good, creative, inspiring teaching is not only desired but recognized and rewarded,” she said. “To have won this award demonstrates to me that Radford really does value and reward creative teaching methods.”

Nominees must have an outstanding record of teaching at Radford University, be professionally active in their discipline and be recognized by colleagues and students as thoroughly knowledgeable in the subject matter and current scholarship of their teaching discipline.

“It was humbling to just be nominated,” Machin said,” and it was so nice to hear and read the nice things students and colleagues said about me in the nomination process.”

Nominations for the Donald Dedmon Distinguished Teaching Professor Award and all faculty honors announced at Fall Convocation are made by members of the Radford University community. Each recipient receives a monetary prize and has the privilege of selecting an outstanding student to receive a scholarship of $500 in the award recipient’s name.

Machin selected first-year graduate student Taylor Hawkins ’19, who along her Highlander journey earned a Bachelor of Science degree in biology and a minor in chemistry from Radford University. Hawkins is now working toward a Master of Business Administration (MBA) in  Davis College and is serving as a graduate teaching assistant for Machin’s Marketing 101 course.

“Taylor is proactive, intuitive, hard-working, creative, self-reliant … there are not enough positive adjectives to describe how much easier she makes teaching this 100-student class,” Machin said. “She is just phenomenal, and she epitomizes the opportunities that are available at Radford University.”

Jane Machin "is truly among a shortlist of professors that have changed my life entirely. I will always be grateful, and I am so excited to congratulate her on this amazing teaching honor.”

It was less than a year ago when Hawkins needed one more elective to complete her biology undergraduate degree and graduate in December. So, she enrolled in Machin’s Marketing 101 course, her first business class at Radford.

“My biology professors taught me how to think and how to be curious about the world,” Hawkins recalled. “Dr. Machin helped me bridge the gap between my love of science and my newfound passion for business innovation. She taught me how to frame questions that enhance creativity and how to understand the world through a lens other than my own.”

Machin is truly deserving of the Donald Dedmon Distinguished Teaching Professor Award, Hawkins said, because the honor “represents her natural passion for research combined with her effective and motivating teaching ability. She is truly among a shortlist of professors that have changed my life entirely. I will always be grateful, and I am so excited to congratulate her on this amazing teaching honor.”

A legacy of faculty achievement

Faculty in the Radford University Department of Marketing are an inspiration, too, and have set the bar high for Machin and her colleagues, she said, with two others in the department having previously won the Donald N. Dedmon Distinguished Teaching Professor Award : James Lollar, Ph.D., marketing chair and professor of marketing; and Angela Stanton, Ph.D., associate dean and professor of marketing.

“There are some fabulous teachers here who are doing amazing things,” said Machin, who earned her doctorate in marketing at the Wharton School of the University of Pennsylvania. “They are very inspirational people to work with and learn from.”

The feeling is mutual throughout the halls of Davis College and into the dean’s office.

“It is a pleasure and honor as the Dean to be able to have Dr. Jane Machin as a colleague,” said Davis College Dean Joy Bhadury, Ph.D. “She exemplifies the notion of a teacher-scholar who cares deeply about her students, maintains an active research profile and goes to extraordinary lengths to build bridges between her research and her instruction. The Dedmon Distinguished Teaching Professor Award merely confirms this excellence, as we in the Davis College have always known.”