At 12 years old, Trisha Vergara moved with her family from the Philippines to the United States. She did not speak English, making school and personal relationships outside of her family difficult, if not impossible. Now, as a senior respiratory therapy student at Radford University Carilion (RUC), Vergara uses those experiences often as she works with a variety of patients.

“People often ask me how it felt to not be able to communicate with anyone when I first moved to America,” Vergara said. “I can relate that to respiratory therapy, when someone is intubated with an endotracheal tube, and they cannot speak or relay what they want or need. I felt the same way during that time of my life. I was able to understand what people were asking me, but because I could not properly formulate sentences in English, I was never able to say what I truly wanted to say. It led to a lot of misunderstandings and frustration. It’s through those experiences, though, that I learned that compassion for patients is vital for all medical professionals.” 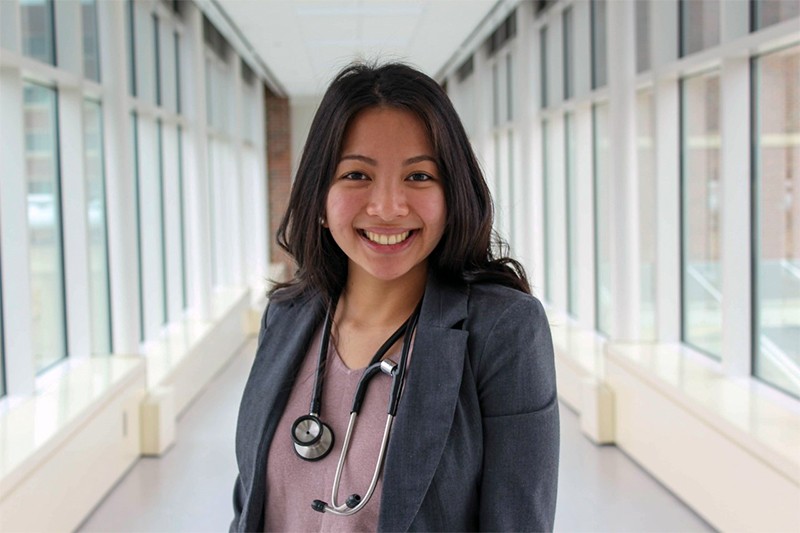 Vergara’s journey to becoming a healthcare professional began when she was dual enrolled in her high school and a local community college.

By the time Vergara had graduated with her associate degree, she was planning to move to Roanoke to begin coursework in the respiratory therapy program at RUC.

“RUC was the only school in Virginia that offered respiratory therapy on a bachelor’s degree level at the time,” Vergara said. “There are many reasons I chose respiratory therapy as an undergraduate major. First and foremost, it enabled me to have patient interaction.”

Vergara has a passion for working with patients and their families with compassion and attentiveness. She said developing this patient rapport is very important to her because it can lead to better outcomes from treatment. Not only that, if often results in a better understanding of how each step in treatment contributes to the overall healing process. “I think this helps put patients on the path to healing,” Vergara said.

Vergara said that another reason she chose respiratory therapy is that it allowed her to study the human body and use that knowledge as a foundation to pursue further medical studies. Part of the respiratory therapy curriculum focuses on educating students about how organs in the human body interact with each other and how they react to disease. Vergara said that there is specific focus on the heart and lungs.

“All of this will be beneficial as I continue my medical education,” she said.

Vergara plans to graduate in May 2021 and has the next step in her education mapped out.

“I plan to continue my studies beyond the bachelor’s level and pursue a master’s degree in physician assistant studies,” she said. “But first, I want to work as a respiratory therapist for at least two years in a cardiac care unit or cardiac surgery ICU and obtain my adult critical care specialty. After that, I’ll work on my master’s degree.”

Respiratory therapists have been active in fighting the pandemic, just as many healthcare workers have."

Once she graduates, Vergara plans to relocate back home to Northern Virginia to be closer to family and large trauma centers in the Washington, D.C., metro area. From there, she will begin to explore her graduate education options. When Vergara does eventually become a physician assistant, she plans to work in emergency medicine.

“I worked as a medical/emergency department scribe for an emergency physician, and he is one of the reasons I became interested in emergency medicine,” she said. “I was scared at the thought of working in emergency care at first, mainly due to what medical dramas on television depict. However, my experience was very different from those shows. While there are times when the trauma bays are busy and full, I’ve learned to manage and act calmly during those situations.”

Before Vergara can contemplate graduation and moving back home, though, she still has several months to complete in the RUC respiratory therapy program. Reflecting on how the pandemic has affected her education, RUC and the world, Vergara is actually enthusiastic about joining the fight against the virus.

“COVID-19 has changed our lives dramatically over the last few months,” Vergara said. “Respiratory therapists have been active in fighting the pandemic, just as many healthcare workers have. I hope to be able to join that fight by next year and help those patients who have the disease.”

Vergara said that respiratory therapists play an important role in caring for COVID patients because they are trained to look at the patient thoroughly and relate that to its relationship with the heart and the lungs.

While Vergara sees many opportunities for impact within the United States, ultimately, she also aspires to translate her education and experiences into helping patients in the Philippines.

“My ultimate dream is to be able to return to my home country and establish a community clinic in my hometown. I have spent the last two summers in the Philippines, and one notable disparity I’ve seen is the lack of access to medical care, especially in areas where poverty thrives,” she said. “I want to be able to change this, and I want to establish a community health center to bridge this problem.”

Over the last few years, I have been showered with many opportunities.”

Vergara said that her mother has a connection to a woman that operates a medical mission in the southern Philippines. In the summer of 2018, Vergara told the woman that she promised to return and join her team once she had earned her degrees and gained experience in the United States.

“I will be joining her and her team to help the war-torn areas in the Philippines,” Vergara said. “I intend to keep that promise.”

Vergara said that she considers herself to be very lucky to be where she is.

“Over the last few years, I have been showered with many opportunities,” she said. “My parents endured and sacrificed many things in order for us to move here and have a good life. So in return, I am taking all those opportunities and turning them into realities.”