Thomas Serebrov is unique. He brings a number of special skills with him from the variety of jobs he has worked over the years, including retail, restaurants, warehouses, construction and the United States Coast Guard. However, his most impressive skills are being employed now as a student in the Radford University Carilion (RUC) Accelerated Bachelor of Science in Nursing (ABSN) program.

“I chose this profession because of a love of people and a desire to help carry them through difficult times,” Serebrov said.

That empathetic and compassionate approach to patient care comes naturally to Serebrov and fits perfectly into the ABSN program’s nurse-patient learning model, which emphasizes patient-centered care. He said that there is something about being a nurse that resonates deep within.

“With all of the different kinds of jobs I’ve done, I could have gone in many directions,” Serebrov said. “My last one before joining the ABSN program was in project management. I had to make a very intentional decision about whether I was going to measure my success by money or by my impact on others.

For Serebrov, that really was not much of a choice at all. It is clear that he is called to patient care. 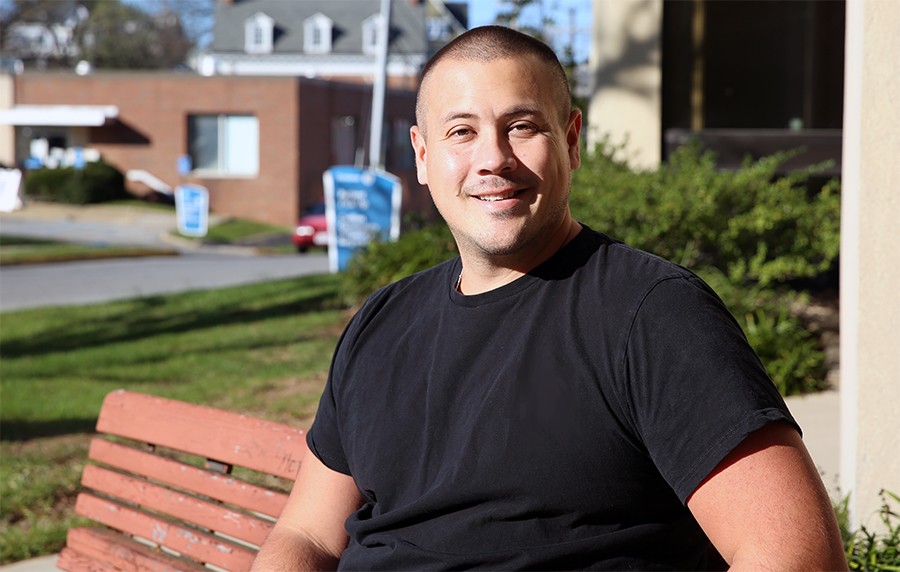 The decision to turn down work so he could study to become a nurse is certainly not one Serebrov would have envisioned as a child. He spent his childhood moving often from one rural, impoverished community to another in states as far-flung as Idaho, Vermont, Louisiana and several others in between.

“I think that my parents had a bit of a nomadic spirit,” Serebrov said. “They were in academia and politics, and career shifts brought geographic ones.”

My upbringing ... helped me learn to value who people chose to be over what they chose to do."

Serebrov’s parents divorced when he was 9 years old, and he lived with his mother until he left home at 16. He then lived mostly with his sister, helping to raise her children.

“We had so little,” Serebrov said, “but that upbringing was incredibly valuable. It helped me learn to value who people chose to be over what they chose to do. Everyone is important and worthwhile in their own ways. I’ve found that keeping that in mind has been helpful when talking with patients from varied backgrounds and experiences.”

RESILIENT
Serebrov tried college in his late teens, but he did not earn the grades he and his family thought he needed to succeed. A change in direction was in order and a visit to a Coast Guard recruiter helped him make the decision to join, working mainly in counter-narcotics operations in the Caribbean.

When he finished his tour in the Coast Guard in 2013, Serebrov settled in Northern Virginia, where he met his wife, Lili. Over the next few years, the couple grew their family by welcoming four children, and Serebrov earned a degree in neuroscience from George Mason University, graduating in 2017. At the time, he was planning on becoming a physician assistant (PA).

“I went for a neuroscience degree because it was a required prerequisite for physician assistant school,” Serebrov said, “but I soon realized I didn’t have any actual healthcare experience, which would be a problem when I applied to PA school.”

Serebrov decided to enroll in a “quick nursing program” to gain experience and earn money while he worked toward enrolling in a PA program. That was where he had an epiphany.

“I discovered the difference between the focus of PAs and the focus of RNs,” Serebrov recalled. “PAs focus on pathology of illnesses, while RNs focus on the patient. I loved that. It was perfect for me.”

Serebrov began looking into nursing programs and decided that an accelerated curriculum would work best for him since he is an older student at 36. At RUC, he found that he could earn his degree on a condensed timeline in four semesters over 16 months and that the program had been specifically designed for students with undergraduate baccalaureate degrees in non-nursing disciplines seeking to transition into nursing.

“I had applied to schools from Florida to Maryland,” Serebrov said, “but something about Roanoke convinced my wife and me that this was the place for us. The people here in the area as well as at the school have been simply wonderful.”

Serebrov said that his background has been instrumental in connecting with the patients he has worked with throughout his time in the ABSN program.

Simply reinforcing someone’s worth and treating them as more than just another patient can make all the difference in the world.”

“Many of the patients are very poor financially,” Serebrov said. “Knowing that I came from a similar place often helps create a connection with them. I spoke once with a stonemason who looked about as out of place as a person could in the hospital. When I enthusiastically said, ‘that's awesome,’ and asked more about his job, he really began to relax. It was great to see him joking with nurses when I left. I especially liked that he opened up about his concerns around paying for the hospital care he was receiving. It helped me understand that the impact we can have on others isn’t always by expertise or technology. While those are important, simply reinforcing someone’s worth and treating them as more than just another patient can make all the difference in the world.”

Serebrov also described a time when he helped treat a man in his late 80s who was suffering from minor dementia. With COVID-19 rules, the patient could not have visitors, and he often cried out.

Serebrov recalls, “He often wouldn’t go to sleep or calm down unless someone held his hand. The last time I saw that patient, I held his hand and stroked his hair as he fell into a peaceful sleep. Those were some of the most special moments I had in the hospital.”

Serebrov expects to graduate in Fall 2020 and is currently applying for ICU positions at Carilion Clinic. He plans to gain experience before returning to school eventually to earn a doctorate as a nurse anesthetist.

“We’d like to stay in the area for sure,” Serebrov said.

Serebrov said it’s been a bittersweet year as he approaches the culmination of his studies at RUC, citing the COVID-19 pandemic as a wrench in the works of his traditional college experience.

“I missed my classmates during that time,” he said. “To be honest, though, I really enjoyed my extra time with family. During the summer, we spent several weeks at the beach. I took jogs along the water in the mornings, attended Zoom classes during the day and took bike rides with my wife into town in the afternoons. The flexibility afforded by the online coursework was really nice.”

Serebrov said that being back at RUC with his fellow students this fall has been refreshing. However, caring for patients is what he really missed the most.

“I have found that the stability and compassion with which nurses care for patients is necessary now more than ever as patients have so many more fears in the hospital,” Serebrov said. “My education at RUC and the opportunity it has given me to work with patients has been a powerful and humbling experience.”