For Andrew Lewis, a student in the Radford University Carilion (RUC) Medical Laboratory Science (MLS) program, his fascination with all things “creepy-crawly” began in elementary school.

“I watched an hourlong special on Animal Planet about various parasitic infections,” Lewis remembers. “It kind of freaked me out at the time, but really piqued my interest in infectious disease.”

In middle school, Lewis’ interest intensified with the arrival of “Monsters Inside Me,” another Animal Planet show that the channel says “retells the real-life, harrowing dramas of people infected by deadly parasites as doctors and scientists try to unravel each case before it’s too late.” Lewis isn’t sure exactly what it was that intrigued him about the subject, but he decided to learn more about it.

As Lewis progressed through high school, however, other interests took over, and he forgot about his fascination with infectious disease. His education and life journey would take several twists and turns before he ended up back to where he began: with the creepy-crawlies. 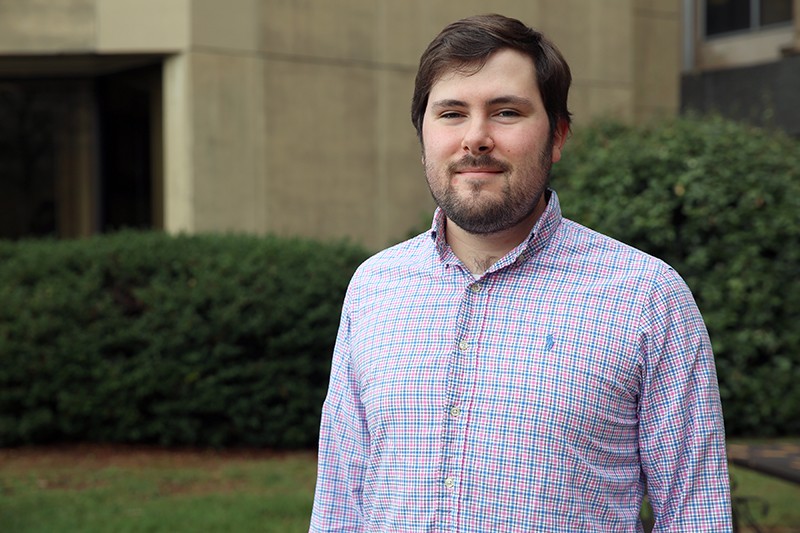 In elementary school, Lewis was diagnosed with Attention Deficit Disorder (ADD). He said that his ADD made learning very difficult for him from elementary school through his college studies.

“I struggled a lot in school due to my ADD and a near-complete lack of work ethic,” he said. “It was very difficult for me to put in the necessary effort to really learn the material in most of my classes.”

Around 10th grade, Lewis focused on improving his work ethic, knowing that to succeed, he would need to motivate himself to put in maximum effort. By the end of senior year he struggled to want to continue his education into college, but with the support of his parents he pressed on.

“While I wasn’t sure exactly what I wanted to do, I knew that I needed to work hard if I ever wanted to find my path,” Lewis said.

Lewis began his pursuit of Higher Education at Virginia Western Community College. It took him some time to determine what he wanted to focus on. However, after taking a general biology course, it became much clearer.

“I found that course was very interesting, and it rekindled my interest in the creepy-crawlies,” Lewis said. “Then, I took a microbiology class, which was unquestionably my favorite class from a content standpoint up until I later finished my bachelor’s degree.”

He decided to earn his degree in biology and work toward a medical degree. Lewis recalls that he knew he wanted to pursue a career that would help people and do good in the world. He felt that by being a physician, he could explore his love of biology while also caring for people in his community.

By his third year at Virginia Western, Lewis said he felt like his educational goals and motivation were on track. He began tutoring other students via one-on-one appointments.

“I loved the job because it helped me stay sharp in a lot of different subjects, including those I wouldn’t otherwise have had the opportunity to explore on a regular basis,” Lewis said. “On top of that, it gave me the opportunity to help students, and occasionally my fellow tutors, with concepts they were struggling with. At the end of the day, the job made me feel like I had done some good.”

Lewis said that his time as a tutor not only helped the students he worked with, but also helped ensure that he developed strong fundamentals in biology, chemistry and mathematics while continuing to grow his work ethic over time.

After finishing his associate at Virginia Western in 2017, Lewis set his sights on the University of Virginia, where he worked to earn his bachelor’s degree in biology. While at UVa, Lewis decided that his plan to become a physician was not going to work out. Instead, he said he felt like he needed to find an alternative way to make an impact on the health and wellness of his community.

Lewis, a Roanoke native, found himself with a variety of paths he could follow. He had two biology degrees after completing his bachelor’s degree in 2019 but still hadn’t found his exact calling. He returned home to the Star City and began thinking about what really inspired him.

“After I finished at UVa, I started looking for something that would allow me to help other people while still allowing me to learn a lot about the topics that interested me, like microbiology, parasitology, immunology, infectious diseases and pathology,” Lewis said. He was eager for a way to help people through his passion for lab work.

Lewis discovered the MLS program shortly thereafter. The MLS program prepares students for a variety of career opportunities in medical, research, veterinary and reference laboratories, performing and interpreting tests, and making recommendations for appropriate treatment and delivering quality data to ensure the best patient care. Medical laboratory scientists are responsible for the operation and maintenance of state-of-the-art equipment, assuring quality and delivery of accurate test results and fulfilling a critical role in high-quality patient care.

The program at RUC offer students the opportunity to earn a certificate in medical laboratory science or a Bachelor of Science in Medical Laboratory Science degree.

“MLS lets me help people with more limited direct contact and also gives me the opportunity to learn about the subjects I find interesting. It’s basically the perfect fit for me,” Lewis said.

Lewis is a student in the certificate version of the program, but he is exploring whether he may continue his study by pursuing his bachelor’s. If he does earn his bachelor’s degree, his previous educational experiences and work on the MLS certificate would count toward this new degree.

“The MLS program is wonderful,” Lewis said. “The instructors are all incredible, and the material is interesting. My favorite aspects so far, of course, have been learning more about clinical microbiology and parasitology. The creepy-crawlies are back in my life!”

Recently, Lewis has been participating in clinicals, which are experiences in actual healthcare and laboratory areas. He said it has been exciting to apply the skills he learned early in the semester to his hands-on work.

“The MLS program is very intense,” Lewis said. “Thankfully, all of the program’s instructors are very happy to sit down and talk with you if you have concerns about how you’re approaching your learning.”

Whether Lewis graduates with his one-year certificate or another bachelor’s degree a few years from now is yet to be determined, but he has his eye on his ultimate goal.

“I’d like to eventually continue my education and get a master’s degree so that I can teach,” Lewis said. “I have developed a love for helping other learners with their educational journeys.”