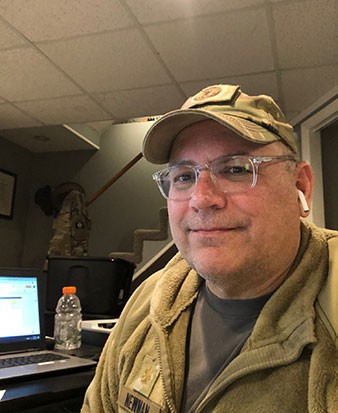 Working from his home in Radford, Jim Newman is coordinating efforts of several state agencies that are working together to fight the COVID-19 global pandemic.

Jim Newman has hope – a feeling not easily evoked in this time of global uncertainty.

His hope is born from the good he sees in people around him. His optimism stems from the courage individuals are displaying the face of adversity.

“As our world faces this tragedy together, I see a lot of great things that people are doing,” says Newman, the chair of the Department of Recreation, Parks and Tourism (RCPT) in Radford University’s College of Education and Human Development.

Newman, too, is doing his part by serving as a “middle man,” he says modestly, in coordinating efforts of several state agencies working together to fight the COVID-19 world pandemic. He is working 12 to 13 hours a day from his home in Radford as a volunteer staff officer with the Virginia Defense Force, one of the three components of the Commonwealth’s military.

“Primarily what our people do is provide communications support to the Virginia National Guard, assisting with tracking missions and maintaining communications during a disaster,” Newman explains.

Since being called into service on March 16, 2020, the same day Virginia Governor Ralph Northam banned gatherings of 100 or more people in the state, Newman has been working as a liaison with such state agencies as the Department of Military Affairs and the Department of Emergency Management. His work began at the state Emergency Operations Center in Richmond and moved to hotel rooms in the capital city for social distancing. Soon thereafter, the officers were directed by the Adjutant General of Virginia to work from their homes to enhance safety.

Day-to-day activities for Newman vary and have included everything from data collection from meetings. “As an academic, I’m good at that,” he says. He is finding convenient fueling locations for military and emergency convoy vehicles to locating alternative medical facilities throughout Virginia.

“Everything touches everything else,” he explains. “And, I’m happy to be building and maintaining these relationships.”

Newman, who is retired from the Air Force, has been an officer with the Virginia Defense Force since 2010. Ordinarily, he is called into service when a Virginia governor declares a state of emergency for weather events, such as hurricanes, snowstorms and tornadoes.

Such was the case in the aftermath of Hurricane Sandy, which hit Virginia in October 2012. Newman worked the deployment of an emergency team stationed in Omancock, located on Virginia’s Eastern Shore.

“We had a team there, and it was the only communications people that area had with the mainland,” Newman recalls. “The members of my team, who were out there, were awarded Virginia National Guard bronze stars, because they were in a garage maintaining communications, and they were in up to their ankles in water.” 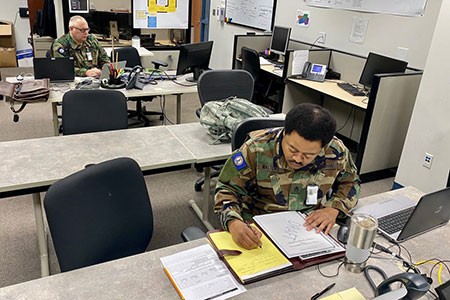 As Newman works almost daily, now, coordinating critical communications in the fight against COVID-19, he must also juggle his teaching and department chair duties. Among those responsibilities is coordinating internships with RCPT students. Their field work has been suspended, of course, and now all of their course work is online. Newman reminds them of the enormous opportunity they have when writing an assigned reflection paper that completes their internship at the end of the Spring 2020 semester.

“I stress to them that it is incredibly important that they write about their experiences with all that is happening around them right now, because people in the future will read and learn from what their write,” he says.

As Highlanders, they are honored to rise the challenge of the weighty responsibility.

Newman is encouraged by his students’ thoughtfulness and , too, by people’s efforts to fight for and help one another through the COVID-19 pandemic.

“As tragic as it is, there are some good things that are coming out of this,” he says. “We are being forced to think and find creative solutions to fight this problem and that will lead to better decisions ahead.”

Fighting the pandemic reminds Newman of people’s efforts and the ways they worked together during World War II. “We are seeing people, the Radford University community included, come together just as that generation did 75 years ago,” he says “To me, that is encouraging, and I am always looking for good that is coming out troublesome times.”

#HighlandersRise is an initiative to spotlight how Radford University students, faculty, staff, alumni and community members push through fear and frustration to pursue their hopes and dreams, even in trying times. Our resiliency sustains us, and our responsiveness empowers us. The entire Radford family, both near and far, is demonstrating a tremendous amount of strength during the unprecedented times we are facing locally, regionally and globally.