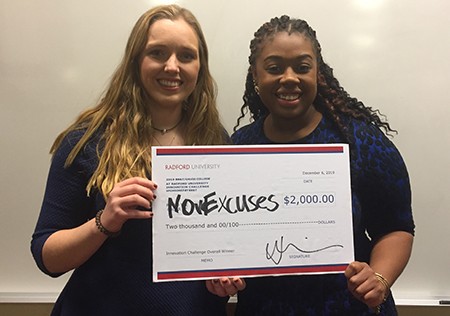 Taylor Hawkins (left) and Starr Woods were top prize winners of the 2019 BB&T Davis College of Business and Economics Innovation Challenge for their idea for a crowdsourced housekeeping app.

It was dreamed up by the dynamic duo of Taylor Hawkins and Starr Woods, two Radford University students with mismatched majors – they said – who had no business – they thought – entering a challenge designed for students to develop service or product ideas that solved real-world problems.

The two found themselves embarking on this challenge by way of their fall semester Creativity and Innovation – Marketing 101 – course with Associate Professor of Marketing Jane Machin, Ph.D., one of the organizers of the fifth annual Innovation Challenge, co-sponsored by BB&T and the Davis College of Business and Economics.

Woods, a public relations major, and Hawkins, who studied biology and chemistry and graduated at Winter Commencement 2019, gave themselves little chance in the competition’s early stages. Once they began brainstorming, they quickly fused their collective creativity into an idea for an app that would “crowdsource housekeeping” efforts.

If a problem were to arise in a campus building, for example a spill or a broken chair, students, faculty, staff and guests could use the app to alert maintenance staff.

“This idea is beneficial to everyone,” Woods said. “We want everyone to feel as together as possible, because coming together is what solves problems” on campus.

Out of 70 teams that competed in the semester-long challenge, 12 were invited to make their ultimate pitch to judges at the finale, which was held in the Davis College of Business and Economics.

The Innovation Challenge began early in the fall semester with teams developing their ideas. The first task was to identify and research a problem and then present as part of a poster session in late September. Students used their posters to discuss their findings with other students, faculty and passersby curious enough to ask questions during the open session.

A second poster session was held on the morning before the finale. From there, 12 teams were selected to make final pitches to 11 industry experts who served as judges in the afternoon.

At the finale, Hawkins and Woods served as representatives for their team, No Excuses, which was also made up of students Brittni Pleasants and Nicole Ziadeh. Their winning efforts earned them $2,000 in grand prize winnings.

This year, more than $5,000 in accelerator funds were awarded to winning teams. The winners were:

Alumnus Brian Cork ’84 made a generous contribution to the Innovation Challenge this year, presenting $500 each to two teams that exhibited, he said, economic social governance. Cork, a business, executive and leadership performance coach based in Atlanta, Georgia, selected for one prize a team of students made up of Clara Defazio, Matthew Hunter, Jack Sheffield, Sarah Steppling, Maddy Terrell and Alec Volles.

Cork presented a second award to the team of Alejandro Lopez Melendez, Siaani Nero, Allison Scherner and Thomas White for their development of a program aimed at helping parents limit their children’s screen time.

“I celebrate you. I congratulate you, and I’m proud of all of you,” Cork said at the finale. “I can’t wait to hear all your stories,” “and I challenge you to keep in touch with me. I want to hear about your great success.”

More than 250 students participated in the Innovation Challenge, and 15 majors were represented, a goal for the organizers who, from the beginning, stressed that many winning ideas often come from non-business majors.

“In many regional entrepreneurship and innovation competitions, we see that winning teams often have members who are outside of business,” Machin said in September. “For example, there are people involved from science, design, engineering, information technology and many other disciplines.”

The notion certainly held true again this year with the grand prize winners, Woods and Hawkins, studying in disciplines outside of business. However, business students made their impressions, too. Brendyn Hayden, a senior management major from Marion, Virginia, took second place for his history-themed card game.

He first thought of the game idea in high school, but put it on the back burner until he needed an idea for Innovation Challenge.

“This challenge really motivated me to take the game idea to the next level and start doing some serious research,” said Hayden, who entered the challenge as an assignment in Professor of Management Steve Childers’ Entrepreneurship and Innovation – Management 250 – course.

Many of the students, in fact, entered the challenge through a course assignment, which of itself was a tremendous asset, Hawkins and Woods said.

“Being in that class has expanded my mind,” Hawkins said of the Marketing 101 course.

Beneficial, too, were the numerous coaching sessions offered to the participants throughout the semester. Those delved into topics, such as defining problems, becoming a coachable entrepreneur, identifying opportunities, understanding the role of intellectual property, pitching solutions and many others.

Childers directed a tutorial session on the University’s new Venture Lab, which is located on the lower level of the Davis College and offers valuable resources to would-be entrepreneurs, of any major, to develop and test business concepts.

Furthering the entrepreneurial education experience was Lighthouse Labs, a nationally known startup accelerator based in Richmond, Virginia, offering a coaching session and certificate in experience innovation. In all, 68 Radford University students earned certificates through this partnership.

“I am so proud of the way the competition has grown over the years, especially the increased involvement of dedicated alumni and local entrepreneurs who led nine workshops and helped to evaluate the students' work at multiple times in the competition,” Machin said, reflecting on this year’s challenge. “As we move forward, I would really like to see greater involvement from around campus. Innovation is a multidisciplinary effort!”