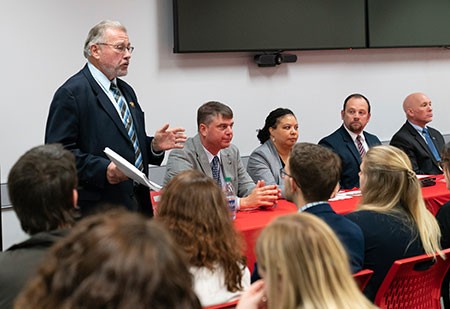 Radford University’s College of Education and Human Development offered a full day of professional development for individuals projected to complete student teaching and graduate during the 2019-2020 academic year.

Radford University has a storied history of preparing responsive and engaged professional educators who teach, lead and serve countless school systems and communities.

Preparation begins the moment students step onto campus as education majors, and it engulfs the entirety of their academic careers. Their education is earned through faculty instruction in rigorous courses, practical field experiences and diverse programs.

Radford University’s College of Education and Human Development (CEHD), in collaboration with the Center for Career and Talent Development, offered one such program at the end of the fall semester. It was a full day of professional development for those projected to complete student teaching and graduate during the 2019-2020 academic year.

The event brought to campus a number of education professionals – teachers, superintendents, human resource directors and other administrators – to share their experiences and expertise.

Many of those were Radford University and CEHD alumni, such as Cole Wilder ’10, who served as the keynote speaker.

“I feel it is important to share what has worked and hasn't worked for me with current students,” said Wilder, the 2015 James Madison Middle School Teacher of the Year and finalist for Roanoke City Teacher of the Year. “There is an obvious passion for education amongst the students at Radford University, and I believe these future educators will make a huge positive impact on future generations. I feel it is my responsibility to help in any way possible.” Wilder, currently a sixth-grade teacher in Radford City, serves as a cooperating teacher for Radford University interns.

A few other successful Radford University alumni joined Wilder in speaking about their expertise and experience with the soon-to-be teachers. Award-winning teachers Kimberly Day Tuttle ’96, M.S. ’98 and Anne Sluder ’95 were among the guest speakers. 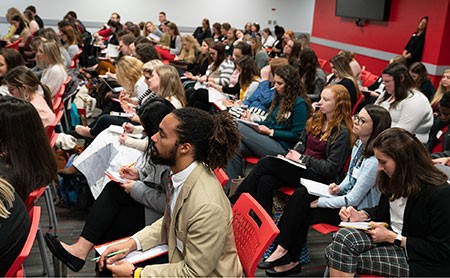 “It was super insightful to hear from the teachers who have received awards,” said Moriah Hinton, a senior elementary education major from Hiwassee, Virginia. “They are super passionate, and they gave us a lot of insight, like how to be an incredible teacher and how to reach every single child in your classroom.”

Brittany Dunbar, who graduated days after the event during Winter Commencement, said it “meant a lot” to her to hear from Radford University graduates who had been through the same rigorous preparation she was completing.

“We know the reputation Radford has for being a great school for preparing teachers,” she said, “but to actually hear from people who have graduated from here … we love to hear from them.”

In addition to guest speakers, the event offered workshops by Center for Career and Talent Development staff on various topics, including jump-starting the job search and managing social media. In an afternoon session, school division representatives led small-group discussions with students and provided tips for job interviews.

The day concluded with a panel discussion in which representatives shared information about their school divisions and expectations of job applicants. They gave an insider perspective on the hiring process and took questions from the audience.

“It’s really important for the College of Education and Human Development to have this event for students,” Skinner continued, “because it helps us feel even more prepared once we graduate.”

Offering the workshop “definitely shows the College wants us to do our best and be successful,” said Richemonde Steckmann ’19 of Fredericksburg, Virginia. “They put in a lot of time and effort. It shows they care a lot about their students, and it shows they want us to be successful.”

It is critical, Wilder explained later, for future educators to learn from the experiences of current educators, especially those who followed similar paths.

“Education is a career in which you learn through experiences and the opportunity to interact with other educators opens your mind up to additional experiences,” he said. “A workshop, such as this, is also extremely helpful as prospective teachers enter the job market.”