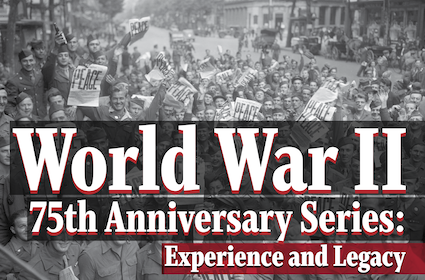 To commemorate the lives of those who fought for freedom in World War II, Radford University is hosting a semester-long series of events dedicated to remembering the heroes’ significant impact on society.

The “World War II 75th Anniversary Series: Experience and Legacy” events begin February 5 and run through April 29, with all events beginning at 4 p.m. on the third floor in the Andrew W. Ross Gallery inside McConnell Library. Suzanne Ament, Ph.D., professor of history, proposed the idea for the series of events.

“We want attendees to understand the dimensions of the war in different ways,” said Matthew Oyos, Ph.D., professor of history. “We want attendees to consider the perspective of that generation. What will the world be like without people who don't know that awful conflict as a living memory? It's a cautionary tale that we can all learn from today.”

The events covering all aspects of World War II, with collaboration from across Radford’s campus, are listed below:

The events will feature a dialogue between speaker and audience, a major goal of the series.

“We want a greater appreciation of perhaps how the past is still a living entity among us,” Oyos said.

The “World War II 75th Anniversary Series: Experience and Legacy” series of events is a cross-discipline collaboration, showcasing the vast impact of World War II and sponsored by the College of Humanities and Behavioral Sciences, Department of History, McConnell Library and the Office of the Provost.