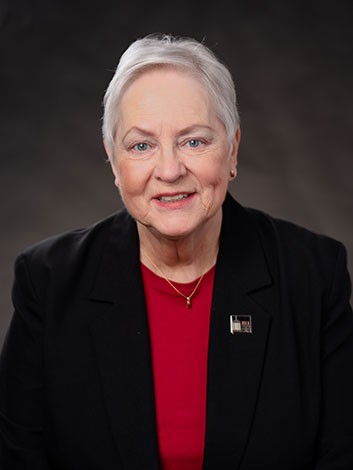 “For the life of me, it really came out of the blue.”

That was Helen Roybark’s flabbergasted response to a colleague dropping by her office one day last year and asking if she had any objections to being nominated for… well, she did not yet know what it was until she saw the explanation on paper.

It was a nomination for a 2018 Dalton Eminent Scholar Award.

“I was shocked,” says the longtime – 18 years, in fact – Radford University Professor of Accounting.

Roybark was astonished, and honored, when she later was announced as one of the five winners of the award, which annually honors faculty who go above and beyond in their research and pay tribute to Radford University’s strong legacy of teaching excellence.

It was no surprise, however, to her colleagues in the Davis College of Business and Economics.

“Dr. Roybark represents everything that is good about Radford University,” wrote Rodrigo Hernandez in his recommendation of his colleague. “If she expects a student to continue learning, she will continue learning.”

That statement is evidenced by her “continued desire for knowledge,” a propulsive force in her accomplishments in the classroom and in academia, says Hernandez, an associate professor of finance. That ambition has driven her to two successful careers in the accounting profession.

She owes her success, she reveals, to two mentors who saw in her an unquenchable thirst for knowledge, her work-ethic, and a burning passion for doing her very best.

Teaching is Roybark’s second career in accounting. The first began 50 years ago working as a keypunch operator for General Medical Tidewater in Newport News, Virginia. “I was working for an educated woman in a time when there weren’t many highly-educated women,” Roybark says.

Time-and-time, her boss approached and said, “Helen, you are so smart. Go to Thomas Nelson Community College and get an education.”

While Roybark was inspired, she had to first earn a GED through adult-education, at age 22. But those words gave her confidence that she could grow her career beyond a keypunch machine.

“She saw something in me, and I’ll never forget what she did for me,” Roybark says.

Some years and several degrees later, Roybark met another mentor, Dr. Ed Coffman, while pursuing her Ph.D. at Virginia Commonwealth University. He taught in the VCU Department of Accounting for 46 years and, like her boss before, had a tremendous impact on Roybark’s life.

“He saw good in me, and I thought the sun, the moon and the stars hung on him,” she says of Coffman, the director of the accounting doctoral program when Roybark was studying at VCU. “He was a true scholar and so huge in my mind, and I attribute everything I learned about research to him.”

Roybark tells a fun and inspiring story – she has lots of those – about the time Coffman gave her a list of 13 items on scrap paper and told her to do some research and report back to him. Six months later – “I think he thought I forgot about the list,” Roybark said – she and her husband, Bob, delivered to Coffman’s office two pallets stacked with boxes of papers.

Every Friday, Roybark, who lived in Newport News and commuted to Richmond for the doctoral program, visited the Securities and Exchange Commission (SEC) archives in Washington, D.C., to work on her assigned research. She meticulously and accurately – solid traits for a good accountant – checked off each item on the list. She spent more than $400 making copies.

“That was B.C., before computers,” she explained.

When Coffman saw the boxes, he asked his protégé, “What is this?” “I pulled out my crumpled-up piece of paper with the list of 13 items,” Roybark recalls, showing Coffman that every item has been marked off.

“He looked at me stupefied,” she said, laughing, vividly recalling the moment. Coffman, Roybark learned later, had simply wanted her to gain cursory knowledge of the topics, not conduct an abundance of research. “But, we had all this information, and I told him it could make for a good story,” she says.

From her exhaustive investigations, Roybark, Coffman and Gary Previts wrote a great story. So much so that Abacus, one of the premier journals for promoting scholarly research in accounting, finance and business studies, published it. “Keeping Watch! Recounting Twenty-Five Years of the Office of Chief Accountant, U.S. Securities and Exchange Commission, 1976-2001” was published in 2003 (Previts, Roybark, and Coffman), soon after Roybark had joined the Radford University faculty.

“I was over the moon,” Roybark says, recalling the joy and relief she felt during a time of anxiety from being new to the Radford faculty.

Nine years later, Roybark, Coffman and Previts co-authored a scholarly article, "The First Quarter Century of the GASB (1984–2009): A Perspective on Standard Setting (Part 2)," that jointly received the 2012 Abacus Manuscript of the Year Award. The researchers jointly shared the $10,000 award.

“That was a big, oooooh wow!” she says, “a once-in-a-lifetime achievement.”

Hands are a vital instrument in an accountant’s day-to-day work. From keypunch operator to owning her own accounting firm in Newport News, Roybark relied on her hands to help her climb to remarkable career heights.

It was her hands, however, that necessitated a transition from practice, after 30 years, to academe. Repetitive, day-to-day motions left her with carpal tunnel syndrome. She had release surgery, but “it didn’t work,” she recalls.

She later complained to the surgeon. His response was brusque, but his words sparked yet another pivotal moment in Roybark’s life.

“I don’t want to hear this. While these surgeries should have been successful, what did you do immediately after the surgeries?” Roybark remembers the surgeon rhetorically asking. “You continued doing the very same activities that made your hands hurt.”

Roybark was devastated. “I was 44 years old and thought that I was nothing without my work,” she says. “That was all I ever knew.” But her surgeon’s words inspired her to explore other opportunities, other jobs.

Soon after, Roybark enrolled in the VCU Ph.D. program. That’s when she met Coffman. “The program was a lot of work – it owned me for five years – but it was worth it,” she says, sitting in her second-floor office in the Davis College of Business and Economics, pointing to her Ph.D. diploma on the wall. “It allows me to be a teacher and to be a mentor like those people were mentors to me. That is something I cherish.”

If you think accounting is pizzazz deficient – or falls somewhere on the negative side of the excitement ledger – you have probably never listened to Roybark talk about the subject, especially some of her favorite hits:

If you ask, she will eagerly tell you that “auditing is done to provide transparent, accurate and complete information to users,” and that it is the “heart of accounting.”

She’ll quickly offer her opinion on the auditor’s role as a ‘public watchdog,’ an edict validated by the Supreme Court in 1984.

She will tell you about the book she has been writing for the past ten years, one that will provide a 20-year history of the SEC through 2021. “It was originally going to be 15 years, but things happened,” she says with a playful smile that seems to suggest she is happy there is more work to do.

Then, sensing she is getting carried away, she will stop, and modestly say, with a chuckle, something like, “This is more than you want to hear. You’re probably saying, ‘Oh, please go away.’ But, I love this. This is how my brain works.”

The passion Roybark has for her work shows in her teaching, and that is one reason Hernandez felt compelled to nominate her for the Dalton award.

“Her work ethic and high standards have set an example for her students and coworkers to follow,” Hernandez says. “Her presence at Radford University has been vital to the professional growth of both students and peers, which is the mark of a great professor.”

Weaved in with her conversations about auditing and regulations and transparency and ethics are recurring mentions of the two people who inspired her to greater achievement in her personal and professional life, and how she has always aspired to serve the same role to her students.

Another conversation Roybark is having lately, with colleagues and students, is about her decision to retire at the end of the spring semester. She can’t help but get a little teary-eyed when she reflects on her time at Radford.

“My life and work have not followed the more traditional path,” Roybark says earnestly. “But, I know that education has been, and continues to be, the glue that is the most real part of my life and work. I have always been committed to being the best teacher possible.”