Radford University representatives report major achievements to Board of Visitors 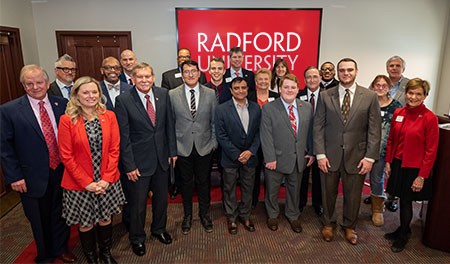 The Radford University Board of Visitors (BOV) met on campus February 13-14, 2020, for a series of committee meetings and a full BOV meeting in which members received reports from University representatives, including administrators, faculty, staff and students.

At these meetings, the BOV approved the following action items:

·       A resolution to certify compliance with the Radford University Debt Management Policy, which outlines the University’s philosophy on debt and ensures existing debt and proposed debt issues are strategically managed consistent with financial resources in order to maintain a strong financial profile.

·       A resolution to approve the Radford University Guidelines for Projects under the Public-Private Education Facilities and Infrastructure Act of 2002, which provide a framework enabling agencies and institutions of the Commonwealth of Virginia to enter into agreements authorizing private entities to develop and/or operate qualifying projects.

As part of the full BOV meeting, several faculty-led and student-centered efforts were highlighted. Associate Professor of Marketing Jane Machin, Ph.D., briefed the BOV on the BB&T Davis College of Business and Economics Innovation Challenge, which annually provides a platform for students to identify market opportunities and design novel solutions to meet those needs. The Innovation Challenge completed its fifth year at the end of 2019, and its most recent winners, Starr Woods and Taylor Hawkins ’19 briefed the BOV about their winning idea, an app called Keep Up that will allow its users to alert maintenance staff of potential issues in a particular building. Woods and Hawkins are working toward making the app a reality. Hawkins, who graduated in December, is now enrolled in the Davis College of Business and Economics MBA program.

Professor of Finance Clarence Rose, Ph.D., spoke before the BOV about the University’s Student Managed Investment Portfolio Organization (SMIPO). Rose, joined by four members of the group and Finance Professor Abhay Kaushik, Ph.D., gave a brief history of SMIPO, from its first investments to reaching a $2 million value in December 2019.

“If it wasn’t for your support and confidence in our students, this could have never happened,” Rose said.

Radford University President Brian O. Hemphill, Ph.D., addressed BOV members and highlighted a number of major achievements from Radford University and the Radford family. President Hemphill announced the selection of Carolyn “Lyn” Ringer Lepre, Ph.D., as the University’s Provost and Vice President for Academic Affairs, effective July 1, 2020. Since 2013, Lepre has served as Dean, Interim Dean and Assistant Dean in the School of Communication and the Arts at Marist College.

President Hemphill reported that more than 70 Radford University students, staff, and BOV members were in Richmond, Virginia, for the annual Advocacy Day event, which gives University representatives an opportunity to advocate to Virginia House of Delegates and Senate of Virginia members on behalf of Radford University.

In addition, President Hemphill reported that the University hosted a ribbon-cutting ceremony February 12 for the newly-renovated Reed and Curie Halls that house the Artis College of Science and Technology. The BOV viewed a brief video of the occasion.

President Hemphill announced Spring Commencement 2020 at RUC will be held at 10 a.m. on May 8, 2020, at the Berglund Center in Roanoke, Virginia. The main campus undergraduate ceremony is scheduled for 10:30 a.m. on May 9, 2020, on Moffett Lawn. About 1,750 students are expected to graduate.

Student Representative to the BOV Breon Case provided updates about students’ desires to increase attendance at Highlanders athletic events. He informed the BOV that students are creating a new spirit chant for sporting events. Case, a junior majoring in business management, also shared a video he produced of students talking about their Highlander pride.

Executive Director of Government Relations Lisa Ghidotti provided an overview of the 2020 Virginia General Assembly session and spoke briefly about legislation that could impact higher education.

On Thursday, February 13, BOV members engaged with their respective committees to receive reports ranging on topics from student success and athletics, to academic excellence and technology. 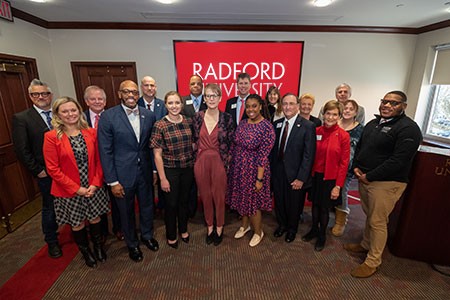 Associate Professor of Marketing Jane Machin, Ph.D., briefed the BOV on the BB&T Davis College of Business and Economics Innovation Challenge, which annually provides a platform for students to identify market opportunities and design novel solutions to meet those needs. Starr Woods and Taylor Hawkins ’19, winners of the 2019 challenge, briefed the BOV about their winning idea.

The University’s mission at RHEC is to provide opportunities for individuals to pursue degrees and certification in nursing, criminal justice, social work, elementary teaching and other areas of study. Students at RHEC also have opportunities for professional development through Governmental and Nonprofit Assistance Center (GNAC) workshops, as well as Training and Technical Assistance (TTAC) workshops for educators.

At the SWVHEC, located in Abingdon, Virginia, Radford University’s mission is to build effective, lasting community partnerships that maintain the health, vitality and economic sustainability of Southwest Virginia communities. The University is currently working to reestablish its presence at the SWVHEC. Most recently, it relaunched its master’s degree program in school counseling at the center.

Faculty Senate President and Faculty Representative to the BOV Jake Fox, Ph.D., along with Sandra Baker, Ph.D., director of the Office of Institutional Effectiveness and Quality Improvement, presented to the committee the results of the 2019 Collaborative on Academic Careers in Higher Education (COACHE) survey, a nationally administered survey through the Harvard Graduate School of Education.

At the Student Success Committee, chaired by Debra McMahon, Ph.D., Student Government Association (SGA) President Colleen McNickle highlighted the group’s participation in the annual Martin Luther King Jr. Day of Service and Advocacy Day in Richmond, Virginia. She also previewed upcoming SGA-sponsored events and projects, including Unity Fest, a Consent Campaign and the completion of another Bags to Benches Program.

Abigail Secrest, student representative to the State Council of Higher Education for Virginia (SCHEV), reported on several issues discussed as issues state-wide, such as additional mental health awareness resources and resources for students who are experiencing food or housing insecurity.

Vice President for Student Affairs Susan Trageser, Ed.D., shared with the committee several updates regarding new programs in the Center for Diversity and Inclusion for different student populations; a successful reception hosted by the Office of Student Success and Retention to honor Dean’s List students; and a new programming partnership between Radford University Carilion and the Taubman Museum of Art in Roanoke. Trageser also shared a recap video, created by the Office of University Relations, which highlighted student involvement in the annual Martin Luther King Jr. Day of Service on January 20.

Radford University continues to embrace the tradition and envision the future, represented by the 1,770 financial awards given to students, according to Cornell.

Vice President for University Advancement Wendy Lowery gave an update on University Advancement and the outstanding financial support from the Highlander family, past and present. For the 2019-2020 fiscal year, total giving reached $6,289,141 – up $3,286,170 from the previous fiscal year. Lowery also presented on the new capital campaign, “Together,” which will be unveiled in April 2020.

The committee also heard from Chief of Staff and Vice President for University Relations Ashley Schumaker on new marketing efforts to highlight transformative educational experiences within and beyond Radford University classrooms. University Relations is now utilizing rich media, an innovative digital platform to reach prospective students. In an effort to embrace innovation and foster growth, Schumaker announced the University will be seeking a new marketing agency. A request for proposal process is now underway, and a new agency is anticipated to be selected in April.

In addition, the committee approved the Radford University Guidelines for Projects under the Public-Private Education Facilities and Infrastructure Act of 2002. The committee also received a report from Auditor of Public Records Zachary Borgerding, and University Auditor Margaret McManus provided the committee with the auditor’s report.

Vice President for Finance and Administration and Chief Financial Officer Chad A. Reed provided the recommendation.

Reed presented an update on the University’s capital projects, including the recently completed Reed and Curie Halls renovation. Other projects included in the report were the Center for Adaptive Innovation and Creativity, and renovations to Tyler and Norwood Halls. The proposed hotel and river campus projects were also named and announced in President Hemphill’s State of the University Address in October 2019.

Reed updated the committee on Virginia Governor Ralph Northam’s executive budget summary and the 2020-22 budget update. The General Assembly convened on January 8, 2020, and has begun the process of considering the governor’s budget proposals. Those concerning Radford University include:

·       The Center for Adaptive Innovation and Creativity; and

The Center for Adaptive Innovation and Creativity will replace existing space for the College of Visual and Performing Arts, specifically McGuffey and Porterfield Halls, and create interdisciplinary student spaces serving the Waldron College of Health and Human Services and the Artis College of Science and Technology.

In December, Governor Northam allocated $101 million toward the construction of the center in his 2020-2022 Biennial Budget. Before funding could be made available for the project, approval by the General Assembly, as part of the 2020 session, is required, followed by the governor’s signature. The General Assembly session will be completed in March.

Lineburg shared with the committee that men’s soccer player Jacob Wilkinson achieved a perfect 4.0 GPA for the fall of 2019. He was named an Academic All-American, First Team Academic All-District and was listed on the Big South Conference All-Academic Team.

In the Big South’s Sasser Cup standings, Radford University currently resides in fourth place among the 11 conference members. The trophy is awarded annually to the Big South’s top athletic program.

Lineburg informed the committee the men’s basketball team, as of the time of the meeting, was in second place in the conference and that Carlik Jones had been named the Big South’s Player of the Week four times this season. The women’s basketball team was in second place in the conference. Baseball, softball and women’s lacrosse seasons are beginning soon. Highlanders baseball has been picked to finish third in the conference, and softball and lacrosse have each been forecasted for fifth place.

In resource development, Lineburg informed the committee that new pledges and gifts to the Highlander Club totaled $712,645, a 105% increase from last year’s to-date total. The club has 881 members.

Coming up for the Athletic Program is the men’s and women’s basketball alumni weekend on February 22, 2020. Highlander Pride Weekend is scheduled for April 23-25, 2020, and will feature the Highlander Open Golf Tournament, the Highlander Half Mile and 5K and the Red and White online auction.

Vice President for Information Technology (IT) and Chief Information Officer Danny Kemp provided updates to the committee on his division’s recent major accomplishments, current initiatives, its customer satisfaction survey, D2L training at RUC, printing services and technology for the Reed and Curie Halls renovation. Kemp informed the committee that Printing Services has relocated to 219 E. Main St. in Radford. In doing so, Kemp recognized Printing Services Manager Danny Coalson before the committee.

The next Radford University Board of Visitors meeting will be held April 30-May 1, 2020, on campus.